In general, capturing a stone in a net is considered better than capturing it in a ladder, because a net does not run the risk of a ladder block on the other side of the board.

There are exceptions to this rule, mostly when the extra liberty that a net gives is detrimental, in which case a ladder is quicker (the opponent is in atari until the end). 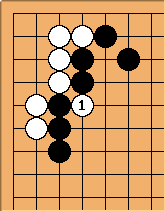 When white cuts at

, black can capture this stone in a ladder or in a net.

The net is better, because the ladder variation allows white to play a ladder block somewhere along the path of the ladder 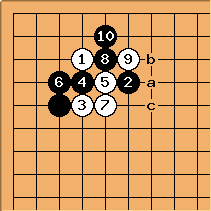 In this variation of the taisha joseki. What the books say is that

is only playable when the ladder at a is good for White, capturing the stone

with the net White b and c isn't enough.

If the net continuation were good, White could play at

in the setup diagram independent of the ladder, thereby avoiding the most difficult variations.

After these plays, however, Black has a good result, and the possibility of a black peep at d remains. Also

. Both of these effects are there because the marked black stone is still on the board.

For comparison, see the usual result from the ladder variation. White's capture in the ladder forces

(Note that the standard mistake here is White at a before

: this loses sente and is an example of ignoring the 123 principle. However: checking with Lizzie shows that LZ prefers that mistake.)