If you like to join, you are very welcome! Please read the Rules and then enter your name in one of the teams. Do you have questions or remarks? Post them at the discussion page. After the game, we will review.

The SGF of the game is 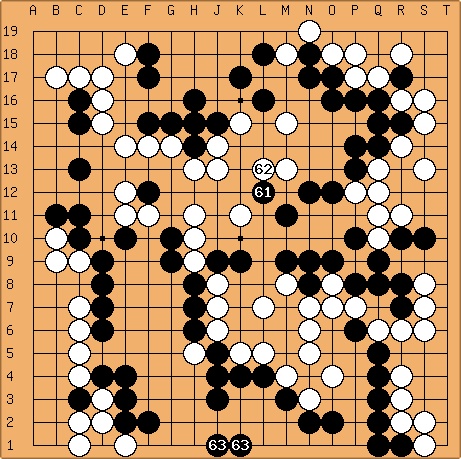 B161 Bass: Poke out the white center potential

W162 unkx80: Sorry for the long delay in making this move.

unkx80: Thank you for the game too. While I would like to play the game to the end, I sense lack of interest on both sides, so it is good to end the game now. Let me recall the earlier parts of the game, and it is time to review.

emeraldemon: Thanks to everyone on both sides, especially the captains. This was a fun and close game, and I'm looking forward to discussing it.

Chew: Thanks! This was quite a bit of fun, and probably good practice reading.

Antone? I stopped making suggestions when it became clear to me that I was completely out of my depth in this game, but it's been a great show just to watch! Kudos to everyone.

Chew: Haha, I never let details like that stop me =)

kanzenryu: Thanks indeed to everybody! This WuRenGo format is great fun and an excellent tool for teaching. I learnt to count a position for the first time, have a much better idea about what's going on in a Ko fight, and a bit about how to estimate and rank endgame moves. Thanks especially to those stronger players with their kind and illuminating comments. After two games on the losing team I'm looking forward to starting a new game!

sh: Thanks for this cool game. Would it be possible to make a final analysis of the game? With my limited knowledge I counted that white is ahead by about 10 points, right? 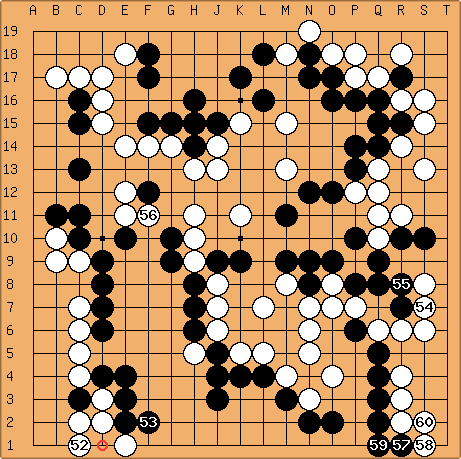 B151 JoazBanbeck: You gotta learn colloquial English. We meant 'doomed'.

W152 Herman: And 'doomed' is colloquial English for? (Captured

B153 Bass: "Gets killed in the end". Or were you planning to take gote here?

W160 unkx80: I have always considered this hane-connect as yours, so there you go. =)

What was happening on the left? 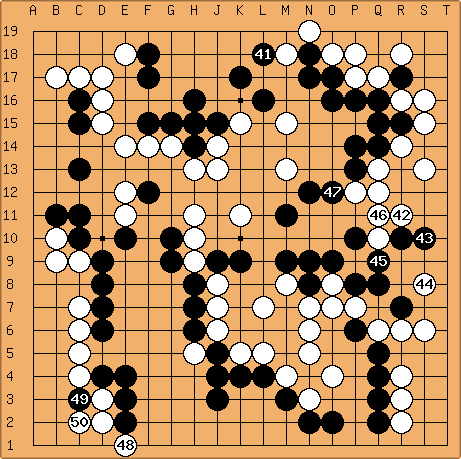 B143 Bass: I think you must mean "be the first to play on the right side after the 110-111 exchange destroyed all the potential there" :-)

W144 unkx80: Well, I think there's no potential here for you either.

B145 Bass: I agree. There's only so much we could do with our eyeless center group when you had strong groups on every side.

B147 Bass: Make territory while connecting.

B149 Bass: Hey! That move was forestalled!

W150 Herman: Forestalled can mean "prevented" or "anticipated", which did you mean? :)

For it has stalled? 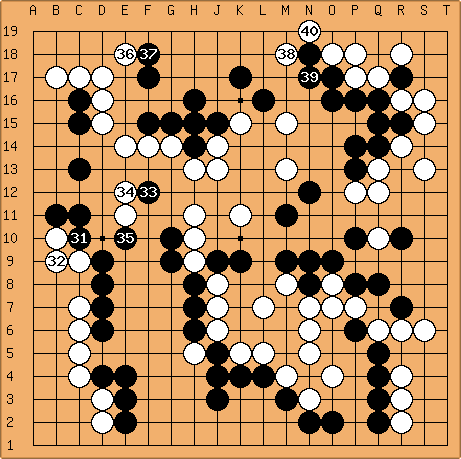 B131 Bass: Force before even thinking about connecting.

B133 Bass: Probe the white intentions

B135 Bass: Those intentions are ok, we'll just connect. 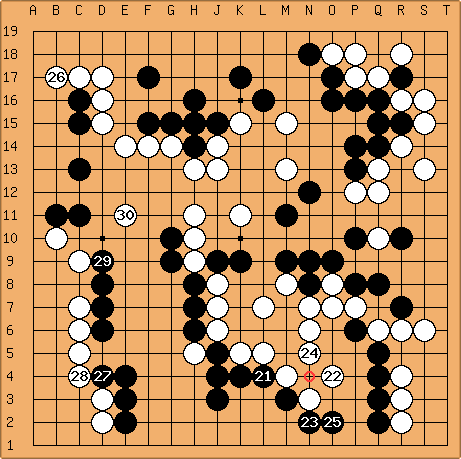 B121 Bass: Atari is the most sophisticated play known to man.

B123 Bass: What about atari-atari then?

B125 Bass: The second line is the line of victory!

B129 Bass: A white stone here would be really annoying.

Battle of the annoying moves 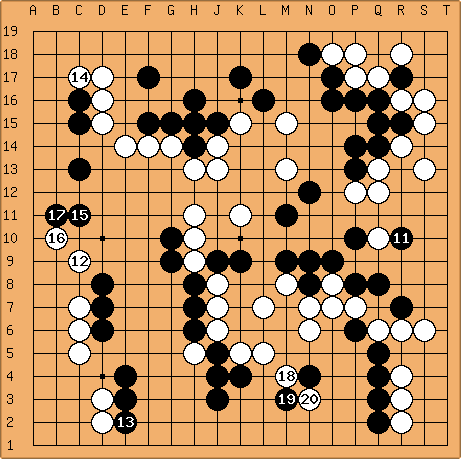 B111 Bass: Thanks for asking, our group is feeling better by the minute. How's your right side potential doing?

B119 Bass: Hmm. You placed a white stone though. 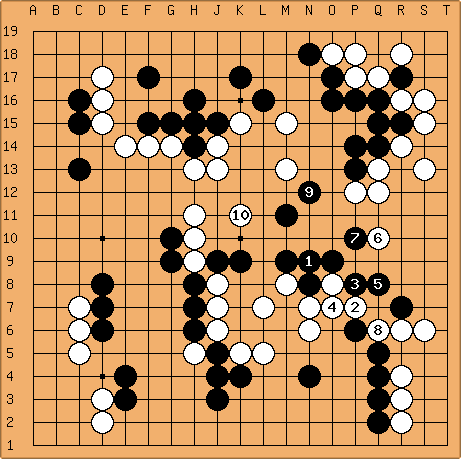 B107 Bass: Even though I did create the reindeer problem, I am not an actual Lapp, so we should be safe. 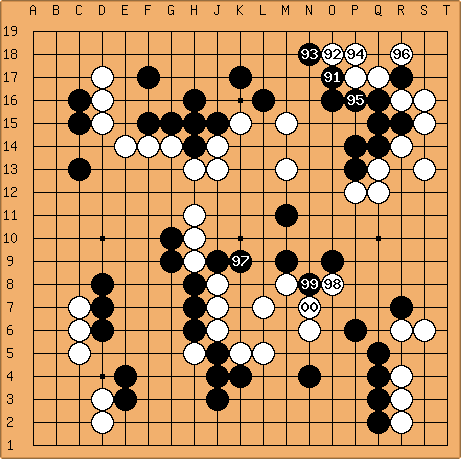 jvloenen: Ok, so take the corner.

jvloenen: Go on, we want you to take the corner!

jvloenen: One liberty less. Don't say we didn't warn you.

Herman: Even more stones to capture :-)

jvloenen: We gave you the corner. Now we can have these 9 stones in return?

A telegram from the Queen 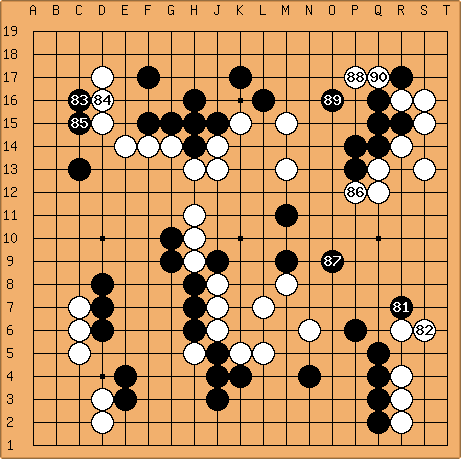 could have been on this side?

worth playing! I wonder which computer game this peep should be linked to..

Herman: I am a moron, therefore I guess I'll have to follow the proverb

Bass: Turning opponent's potential territory into our own is worth double.

unkx80: Black decided to tenuki on the right side. Let's see how black will answer this move.

Bass: Make shape in the center while threatening to connect. 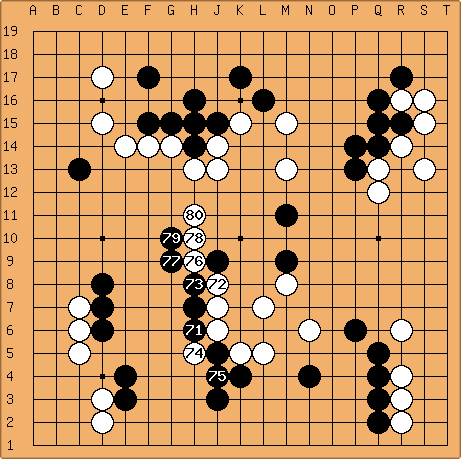 unkx80: Continue bumping around into the new year.

jvloenen: We just go on.

Welcome to the 80s 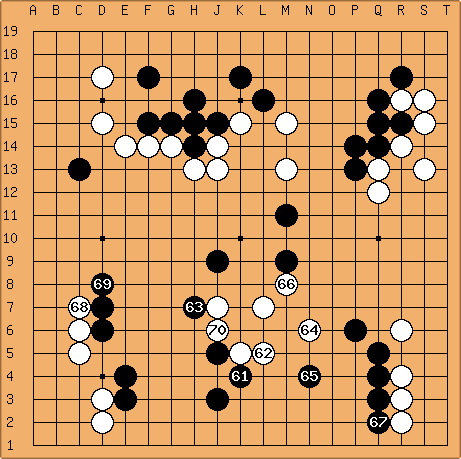 Bass: If only every forcing move would force us into shapes like this.

unkx80: We are happy to get a table shape as well. Does this come with chairs? =)

Bass: That's a very nice table indeed! We want one too, but since we cannot make our own right now, can we have yours?

unkx80: You are welcome to enjoy your dinner at our table, but I don't think the table itself is edible.

IanDavis: Then we shall eat you.

Bass: After a couple of days of Christmas feasting, I don't want eat anything anymore..

unkx80: Back to business as usual. 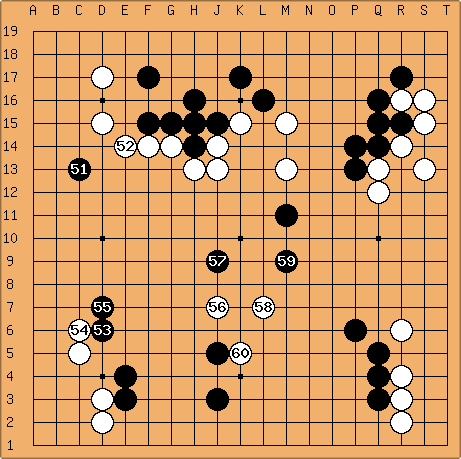 Bass: Let's see about this side then.

Bass: Not thoroughly impressed by the suggested attack's power, we take the big point instead.

Bass: Move ahead, we don't want to be the ones putting the cart in front of the horse.

Bass: Make a road block on

unkx80: Since Black wants to keep us in, we shall

If only I had a cool comment while posting this 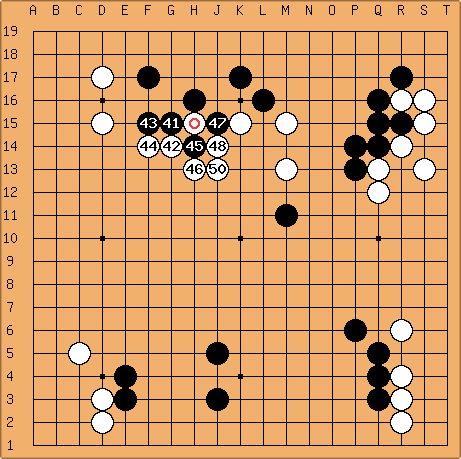 jvloenen: Do you want to connect to the left side?

Bass: Ok, go right ahead. Surely you won't mind if we keep this small stone as a souvenir?

) Bass Thank you, it was very tasty. Sorry we couldn't leave anything but cutting points for you as leftovers.

Herman: No problem, nothing wrong with a few cutting points :) 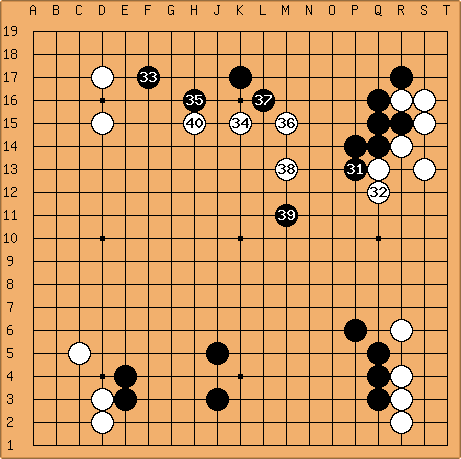 Bass: No unfinished josekis on my watch. Also, gets a perfect position at the upper side.

unkx80: Reduce the top side.

Bass: Answer the cap with keima.

Bass: That's a nice group you have there. We'd hate to see anything bad happen to it. 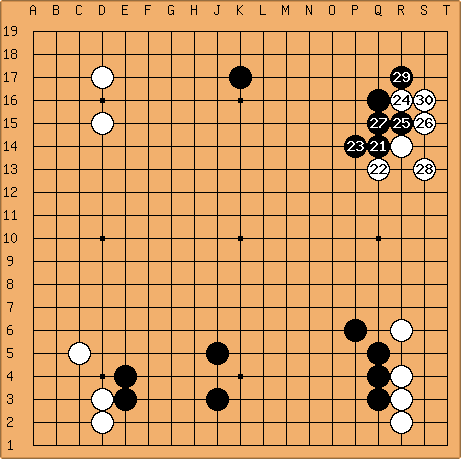 Bass: Always finish up your joseki :-) 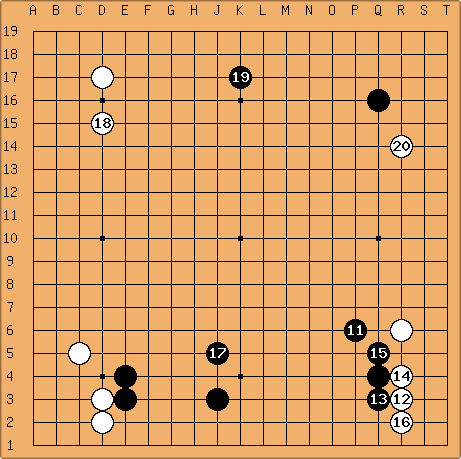 jvloenen: Defend and build (tapir: Please read and comment on 44PointLowApproachCap) [<-- an amateur joseki it says. As we're all amateurs it should be fine ;-)]

Bass: Always finish up your joseki.

Herman: Protect against the cut and take the corner 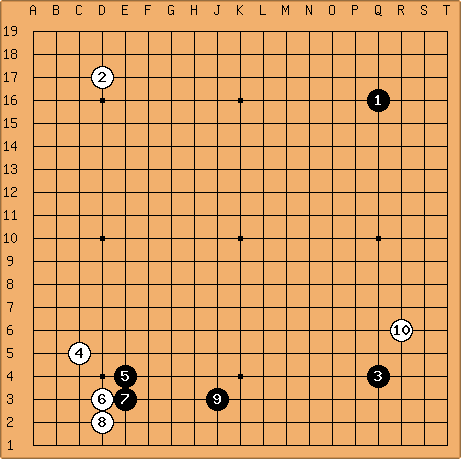 Herman: Have a lot of fun, everyone!

Herman: We'll take the corner then