This is somehow related to BQM450 and 44pointLowApproachCap

Tapir: Can we analyse the following sequences which are shown somewhere on SL (and put together on the cap page by me) via tewari? I suppose some of them are not even at all.

Herman: All of these sequences (1, 2, 3, 4) have been played in at least a dozen professional games, so I think it is hard to say that they are not even at all. All the diagrams on 4-4 point Low Approach Cap do not have the hoshi stone on the left side by the way.

Tapir: Oh, you've taken those stones away... initially there was a stone along the side in most variants on the page. :) + I didn't know about those dozens of professional games. In my small personal collection they are very rare, and winning percentages aren't so good for the one playing the cap. And the cap is played in those games more or less later in the game when there is much more to consider than one stone along the side. The answers for

are more variable (double approach) than the invasion as well...

Herman: Yes, I've done my research into this play based on a 9x9 corner, ie without the hoshi. And as the "advice" diagram from "the direction of play" shows, it need not be there for this move to be played. I've checked the move against GoGoD (2007 summer ed, I've got the 2008 winter at home, but have not installed it yet).

On an otherwise empty 9x9 corner, I can find 369 games where the cap was played (only games after 1900 considered). In those games, the invasion is played 152 times, the keima extension 96 times, and the double approach 25 times (one-point, two-point and ogeima extensions together add another 30 games where white extends to the right). So for now I've chosen to dicuss the two most common variations. (but I'll try to add something on the double approach as well, soon)

After the invasion at 3-3, black split white's stones 87 times, and blocked on the left 65 times.

After the split, black played hane (

After the block on the left,

in sequence 1 was the most popular continuation at 24 times,

in sequence 2 was played 17 times.

Tapir: I read Takeo Kajiwara as saying: A framework should be build with this move otherwise it is irregular. His example is without a stone at or near the hoshi, but his point isn't that you don't need a stone there, but that the cap is playable only under certain circumstances and that it fits nicely in the given game. PS I have no joseki dictionary or sth to this end, so if the sequences are indeed joseki I'll be quiet. But

in sequence 1 still looks odd to me (but maybe this is the only sente sequence available).

Herman: Yes, it is a special circumstances move. Of course, in Go Seigen's variation with this move and san-ren-sei, black uses sequence 4 and the framework actually appears on the other side :-)

I also fully agree with you that

is on the vital point of black's kosumi. But given that it has been played 24 times, there must be something to it ;-)

Tapir: Can you check how many times out of the 369 games the cap was played there was a stone at hoshi or near by (on 11-4)?

Herman: Out of 417 after 1930 that have the following position, these are the statistics for how often there are stones along the left side, and where they are...

Herman: So about half these games have a stone on the 10th line, and about 1/3 have a stone as far away as the 12th line or further. 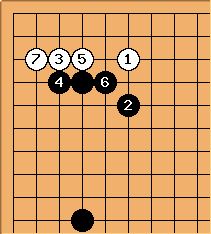 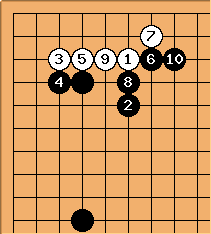 Tapir: This looks better, but white has some aji to invade or to cut directly. So I believe this is worse than the joseki after the low 1space pincer. Though black is stronger towards the right than in the pincer joseki -> but this isn't the major direction? Tewari? 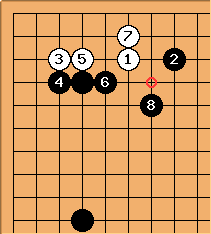 fractic: White might not have as much aji on the left (although I'm not even sure about that) but she does have the push at 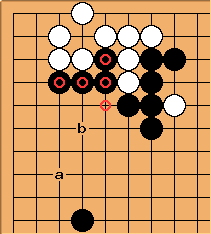 fractic: Black also has the cut at

stones I'd say there is quite some aji. An invasion on a could work with some support nearby. So I'm not really sure why you think the other position is worse for Black.

tapir: Don't mind, I'm weak. It was just my impression.

JG: Just for accuracy. A White stone at

could be captured by a black reply at b. I agree that Black's shape is clumsy. 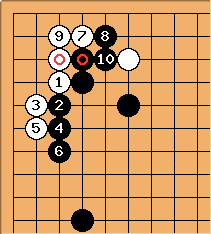 Tapir: I'm not sure about this. Looks like a known joseki + 1 unreasonable stone by each player.

may be the right direction. 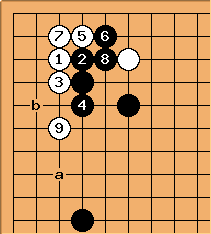 Tapir: This one is reasonably similar to a known joseki. Black has a nice follow up at a (threatening b). 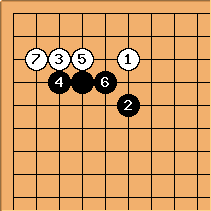 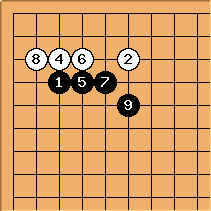 is usual for a very different sequence. But that doesn't matter, I just want to point out how odd

looks in this sequence.

Herman: Yes, but tewari doesn't really work if you put a tenuki in the middle :)

Tapir: But there are tenuki joseki to compare with... (You can make 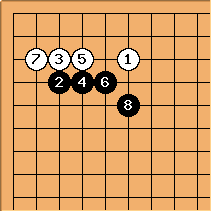