To "play kikashi before defending" is an idea, derived from choshi, where if you must defend in an area in order to live, make good shape, or remove aji, it is usually correct to play kikashi in the area before doing so.

The idea of kikashi before defending is to play kikashi that are:

All of the above points are usually more desirable than simply living or playing in gote. The reason it is not always correct is because kikashi moves can destroy aji as well as create it. See kikashi for more ideas about the term itself 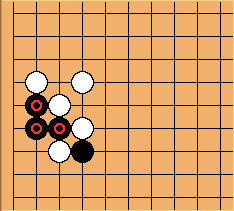 Black to move and save the 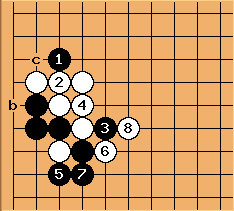 (in that order) before capturing with

leaves behind ladder aji, practically forcing White to capture at

to fix up his shape, allowing Black to end in sente. (There is still aji -

is still not captured yet!)

White does not follow the proverb here, since Wb is a good ko threat later (at this time, Black's descent at c is not a threat, since Wb is sente against the lower side). 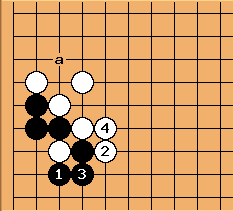 Failing to play kikashi first gives White too many options, even allowing him to follow the proverb himself to make good shape, for instance at

here. If the left side is not important now or later, White may ignore a later peep at a. 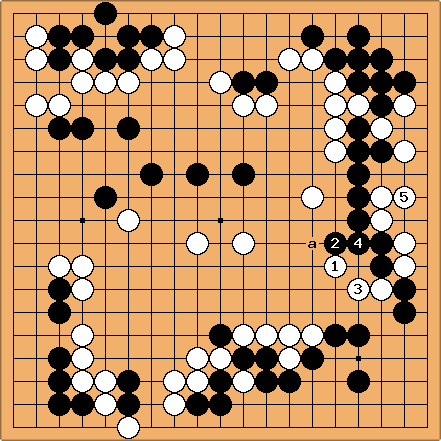 before returning to live at

- these two stones are useful moves that contribute to finishing off Takemiya's moyo on the lower side.

Dieter: Why did Black allow for a second forcing move with

unkx80: Probably to apply pressure on the

elfking: if 2 was played at 4 then white can play at 5, which becomes somewhat sente because afterwards if black plays tenuki the moyo formed by white playing at 2 or at a is quite big as far as I can see. 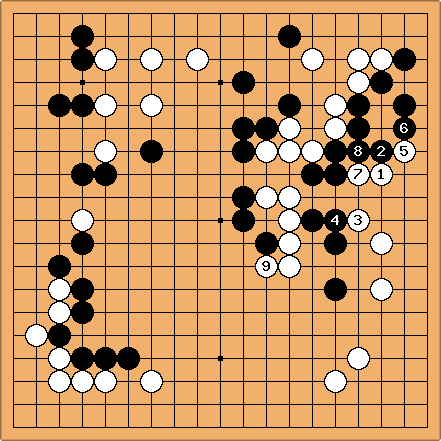 In a game vs. Yamashita Keigo in the 29th Meijin league, Cho Chikun plays kikashi with

before strengthening his center group with

http://www.asahi.com/igo/meijin29/16/05.html.) As it turns out here, despite the proverb about sacrificing kikashi stones, only

happens to be in any danger!

More examples of Kikashi before living