12 december, Dieter: Robert, Tapir, Hyperpaterie, Bill and others, I'm really enjoying the work we're doing. I think we're moving in a good direction. For those who are less happy, stay with us and correct where we've gone astray. Great job to everybody!

tapir: I should be busy with work right now, but just want to say I like the direction as well.

Hyperpape: Does anyone remember a page about the problem of assimilating concepts from CJK into the Western understanding of Go? I believe it was by Charles Matthews, from fairly early in this wiki's history. I want to say it was the assimilation problem, but I can't find that. Searches on concepts didn't help either. It's not Pattern Language.

Dieter: I think it's more something to worry about than to be proud of, but this librarian here knew the location of that book right away: articulation problem.

Of course! And bear in mind that this editor thought of it in response to a discussion about English go terms.

Caern: I thought about GokyoSeimyoVolume3Problem140/Attempts#Live or die problem (bottom of the page) and didn't find answer yet. Spare some help?

tapir: SL is somehow lacking in enclosure probe discussion. (I mean the lack of variations is more pronounced than in other areas, as we have about none.) So sad. Another oddity is the existence of "standard joseki" according to the book, of which I don't have single example in the database. Hmm.

Hyperpapeterie: What makes a good pro page? I've been looking at the professionals we might feature for AoTW, and beefing up content on one in particular (Seo Pong-su). What would those pages require to be featured (aside from a complete list of titles, which is usually low hanging fruit)?

Tapir: The Seo Pong-su page looks fine to me. We had other proposals where much basic information was lacking and it wasn't clear whether it is featurable, e.g. Huang Longshi.

Reuven: I see that nobody attempted

KyuExercise133. I was wondering whether it's the difficulty or my unfortunate layout... Should I perhaps split them (If so I would preffer having them in order, would it be okay to do 133a, 133b etc)? If they're just too diffuclt for the kyu problems, perhaps somebody could move them elsewhere? Or if there're no takers I guess I could post the anwsers myself (I have an sgf ready), some have some interesting variations...

Tapir: It is a general problem with tsumego on SL. Although the layout may be a contributing factor here, maybe we can try again with KyuExercise163-170?

Reuven: I've done this with another problem set (KyuExercise130) putting it at KyuExercise171-182 but it's a little shame that future additions will be seperated from the current set... I still think it'd be nice to have 130a, 130b and so on...

Tapir: Well, KyuExercise130abcdef?... is probably fine as well. I have no strong opinion on such matters. Thought it will be better recognised when starting with new numbers. If it is not working out, you can make an independent index as well for these problems, they are pretty thematical it seems.

tapir: Is there anyone speaking japanese here able to provide examples from actual japanese usage of the term "aji". As opposed to the western notion which seems to be thoroughly mixed up with "nerai". 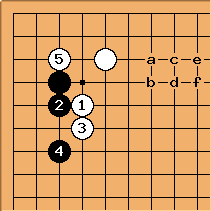 above. Regardless of whether there is a black stone at a to f the main ideas of

and the different black answers are remaining the same. The usual presentation would now give only the main variation six times (+ 1 for tenuki), that the whole thing is one main theme, with different preferences according to outside stones, different choices, follow ups is totally lost to the reader. Joseki dictionaries suffer from the same problem, the are ordered by move, with a different chapter for each pincer, the theme of the pressing move and the attachment at

is nowhere explored in depth. Can we find a better way for SL?

Not very pleaseful situation for white, yeah? Black takes left side and may take the corner or divide white.

is an overplay it should probably be at

You need to shortage libertis of B before go W.

iseijin: Where does the name 'star point' or 'hoshi' come from? What's its origin?

Anonymous: I don't know the complete etymology of the use of hoshi for the special spots on the go board but there may be some ancient astrological association with points on the go board. By the way, a second meaning of hoshi is "a spot", which agrees with the go board use. In recording wins and losses on a tournament chart in Japan, a small solid black circle is used for a loss and an open, white, circle is used for a win. These are referred to with the words kuroboshi or shiroboshi. Incidentally the "star" points were marked by a small flower symbol on ancient Korean boards and they are known as "flower points" in Korean.

Tapir: Why is it, that people write comments on the most minute detail instead of simply changing it? Are even SL's mistakes so imposing that nobody dares to change them?

axd: What if you're unsure? If you don't know the wiki ( - policies)? A related issue is to add comments rather than wikify them; but if it's a question, maybe it's up to the one answering the question to turn the whole into a nice paragraph.

Tapir: I would be happy if someone can comment on my elaborations (WME) at 4-4 point low approach low extension, slide, attach.

Tapir: The observation that coffee machine lost activity since the discussion is spread over all the individual forum pages was convincing to me. Not sure what to do about it.

Tapir: Can a GoGoD owner please check 3-4 point distant low approach? Interestingly we have about no coverage on the following

. Interestingly pros play it (in about all games I found from 2009) when Black is strong (shimari or otherwise) in the upper right corner. Any takers?

John F. 3 still dominates, both over all that time and in recent play. In 26 games since 2009 inclusive, 3 appeared 21 times, J17 3 thrice and Q18 twice. It is virtually a joseki then for Black to play M17, White F15.It is then relatively rare for either side to get much territory in this area, but every now and then White strikes lucky.

tapir Thank you, never thought you would answer when asking for a GoGoD owner. The trouble is: one of our high dan players commented

is a short term fashion in 2002 and common only with White backup along the edge, as a sort of kobayashi-like formation. Now it turns out the opposite is true. The other problem is, I don't really grasp the idea of this

. Is it really playing lightly as if invading a framework, setting up a miai between strengthening the

formation or extending along the edge with e.g. a, all the while the slower extension would suffer from a checking extension with Black able to build ideally from his enclosure? Anyway,

is the kind of move I somehow can't even consider during a game. (3-4 point distant low approach)

John F. I initially found the high move an astounding and unexpected concept - almost a misplay. However, if you view it (or rather the giraffe's neck shape) in light of what I've said about Go Seigen groups and Chernobyl areas (see Go Companion or New In Go), it doesn't look quite so outlandish.

I notice I also omitted a word above and have now restored it (over all time >> over all that time). I meant over the period since the first edit you refer to. Over all time it is slightly in favour of J17 (rather than 3) but a turning point came about 2000. It may be connected with the discovery of the giraffe's neck. Our first pro example is from 2000, by Hikosaka Naoto (we have an example from top amateurs in 1986). Since then, there has not been just a tilt in favour of 3, but a landslide. A key question appears to be whether Black should play M17 immediately and allow the giraffe/Go Seigen group. It seems he wants to try to avoid it - the GSG group is too good - but if he doesn't, he runs the risk of not getting it in at all, and then White can get a superb shape on the side.

Dave I see a little broader context to this. The giraffe's neck emerged in the early 80's as part of the Kobayashi fuseki (see Takemiya-Sugiuchi in the 29th NHK, 1982 for what I think is GoGoD's earliest example). A standard sequence is shown below, although there are many examples of alternatives. The point is that with the upper right a star point, White is aiming to invade at a next (it is indeed the most common continuation in the upper right - Black will not typically use a play to defend such a position). In contrast, in the situation above with a shimari there is no such nice invasion. There White's natural follow up is to cap at b and give Black a low position overall. In the early going, White played there immediately, however, the results were not so good. White is thin. Finally White settled on the giraffe's face with the play at c. 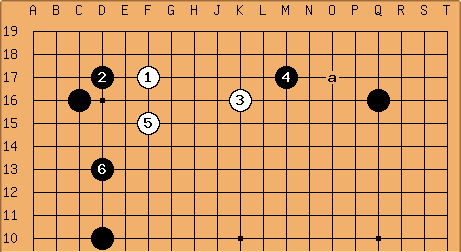 With all this we should keep in mind that, with the shimari in the upper right, the low distant approach has not displaced the high approach to the 3-4 stone. This is very different than the situation with the Kobayashi. What might be considered standard play is as shown below...

on SL at all, but only

MasterGo has a game from May 1958 with Kajiwara Takeo (vs. Fujisawa Hideyuki) building the giraffe shape (with Black approaching afterwards) in a situation with Black enclosure (as first occasion).

Hyperpapeterie: How often is it that top amateurs anticipate professionals in this way? Harada Minoru may have experimented with the High Chinese, I seem to recall Go Seigen's brother playing some moves before Go Seigen used them, but maybe these are just isolated examples that have stuck because they're so rare. I sort of doubt that professionals would study top amateur games, so is it just coincidence?

Reuven: Being mostly away from go for a while, I really got scared by the front page article of the weeks picture there for a moment... >_< Thank god my heart is ok... :)

Tapir: 20k pages in SL and nobody did notice!

Tapir: ooooh, it was just me who missed it! any celebrations?

I'm sure the WuRenGo3 teams would love to see some more players (especially captains) joining up.

WuRenGo3 is getting started. The last game, WuRenGo2, was great fun and a fabulous learning experience. Feel free to come along and join a team. Let's try to get even more players than last time.

JRedfor(KGS): I've been looking, off and on, for tournaments around my area. It seems like Arkansas repels go tournaments; pushing them to the coasts, up north, and down to Texas. I may try to run one... see if I get flung to Oregon or something. Would anyone be interested in an annual tournament in north-west Arkansas?