I have been an active member of the Delft Go Club (

http://www.goclubdelft.nl), since I came to work in Delft in February 2006. I act as contact-person, I give the introduction course and I am co-organisor of the Delft Go Tournament.

My interest in go has emerged a long time ago. I heard that the game was elegant and more complex than chess, in such a way that a computer is not able to play at a decent level. However, the interest I had only translated to actually playing the games after several years. In 2004 my room-mate (at that time) and me went to an open day of the go club in Eindhoven. We immediately signed up for the introduction course. The game fascinated me from the start and in the following months I studied and practiced a lot.

I earned the white and yellow go-diploma (about 21 kyu and 15 kyu) immediately after the course. In the following months I received the orange, green and blue diploma (12 kyu, 9 kyu and 6 kyu). For the brown diploma I had to wait a bit longer, partially because a lack of dan-grade players in the club in Eindhoven. (To get the brown diploma one needs to win a game with a dan-grade player while getting 3 stones handicap).

In the beginning of 2005 I started participating in go tournaments. My first tourney I played as a 4 kyu and I climbed up to 1 kyu rapidly. I have been playing as a 1 kyu for almost two years until i was promoted to first dan (shodan) on friday 20th of June 2008. Wednesday the 1th of July 2009 I have been granted the rank of second dan (nidan).

I regularly play go on the internet, especially on the Kiseido Go Server (KGS). My nickname there is ThorAvaTar. 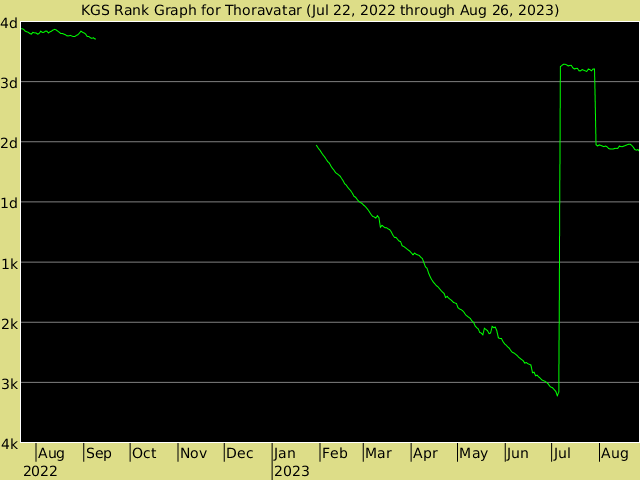