Dansc: There was some discussion about lowering the captain bar for this game, but I don't think a conclusion was ever reached. So how about it? As of now, we have one 4d, one 1d, two 2k (both in the same team) and the rest are 5k or weaker. How about dropping the captain bar to 2k and asking either fractic or tapir to join the white team? :) If we have just one captain per team, it can get quite slow at certain points. If we get more dan level players to join later on, we can of course pull the captain bar back up.

gaius: I just joined the white team (as a soldier for now). I'm Dutch 1k and I hope to be 1 dan in the near future - if there is demand for a second captain I could volunteer.

Hmmm, how do you know if someone's active or not ?

unkx80: You guys should also agree on whether a honour system is in place. In the first game, some players followed the honour system while others were constantly looking into the opponents' pages.

thanatos13: is it okay to pick another or to cancel your own pick then pick another? I don't like my decision anymore.

Chew: As a silly thought, it might be amusing to keep (either on the game page or the page for each color, a 'score' for each soldier on the teams. It would be interesting to track how many 'chosen' moves each player suggested. Might be too much work, though. Obviously, I like numbers.

FireclawDrake: I am slightly concerned about the manner in which the moves are placed on the main page. It's a little counter-intuitive, as I noticed when trying to read through the WuRenGo1 game, the diagrams have the newest set of 10 at the top, but the oldest move at the top, beside the diagram. It seems a little.. strange to read it this way and I suggest that we reverse this, so that new moves are inserted at the top of every time.

kanzenryu: The most important thing about the manner in which the moves are placed on the main page is to include a link to a proverb or a sarcastic comment ;-)

FireclawDrake: I am currently making an SGF file that will have everything pertaining to the game, every diagram presented for both teams along with all the commentary for each. I was just wondering how many people would be interested in this, because if it's more than a few, I can keep it up-to-date with each recent move. I find these types of files much easier to read than the wiki format we have here. It just flows easier. Anyway, please comment. 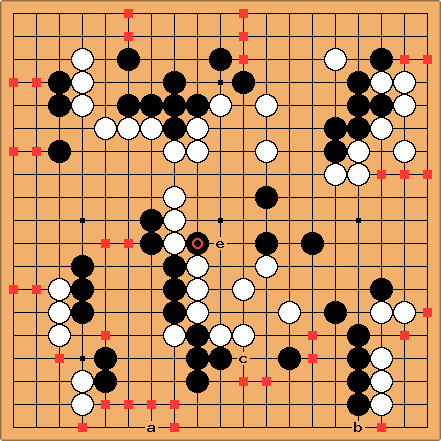 I dropped lines straight down from walls in most places, and I tried to count conservatively: only points that seemed relatively certain for most players:

This is a very rough estimate, and doesn't count whatever points might occur on the left or right sides, reductions along the bottom, or attacks on the center or upper right stones. But roughly I think white needs to make up about 30 points somewhere. So should W resign? Not yet. Black still has a few weak groups and holes, enough that I think white has at least a chance of picking up that 30 points. But we're certainly behind.

Tapir: I don't agree. Just look at a and b, you count 6 points too much for black at a, 2 points too much at b, again at least 2 points at c. You don't count points at all for white in the center. Even the secured ones. And you calculated all black stones to be alive (even

!) and not even allowing for some white profit while black has to connect to make life (and a single stone not to be answered in favor of connection or similar can easily amount to 15 and more points now, look at the top and the right side). It doesn't feel like white is behind to me. I actually prefer White, Black has some way to go to safe all his stones, I am not seeing this yet (the black top is practically dead if they don't concede at least the corner to white).

emeraldemon: Yes, black's groups are weak, and white seems about to pick up some good points in the upper right. I agree that since a is sente, I should have counted it against black, lets say -8 using the proverbial value. I don't count b though, because it could just as easily be black who plays there in sente. c is probably also sente, but only 2 points or so. I didn't count

, because in my opinion it isn't caputured yet (black at e?) Although I certainly could be wrong. Let's allow for its capture plus an additional 5 points in the center (probably we'll get at least 5). I don't want to count points for W in the upper right yet, it's still to uncertain. Still, we get new numbers (edited above):

ThorAvaTahr: I admit, this game is difficult to count, but one who thinks black is ahead is misleading himself. Let's try to add -30 points for each weak, group and you come to a more realistic count (i.e. W+49)

emeraldemon: Someone went above and re-edited my estimate, adding moves that hadn't been played yet and points to the estimates (so they didn't add correctly anymore). I've tried to leave the above estimate as it was, but for fun, I'll put an update, now that we've played 15 more moves. 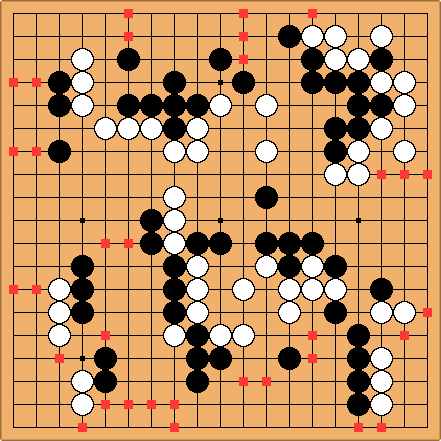 The main difference here is that white picked up big points in the upper right corner. For what it's worth, I'm intentionally not trying to add penalties for weak groups or gains for attacking chances, only to get an idea of what territory is relatively solid for both players. On the left side especially, there are big points that could go either way, but I'm not going to guess who will get it. I'm just leaving it uncounted. In the same way, white picked up 9 points in the corner over this past sequence, but I feel justified in not counting those points as territory in my previous estimate. Black could well have blocked that cut, preventing us from getting any points in the corner. White would gain a big attacking chance on the black group then, but how do you put points on something like that?

Bass: You count ten points for one-eyed weak group for the opponent, and twenty points for an eyeless one. Well, of course you don't, but that's what I do :-)

No need to panic, White 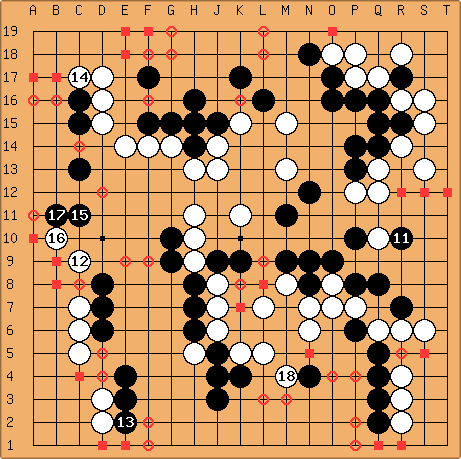 tapir: the obvious difference in estimates may result from where not to count (left center, right edge, smaller black top. getting the very big double sente on the first line along the lower left edge is assumed here - however it is whites turn and i am looking forward that we are using our sente well. 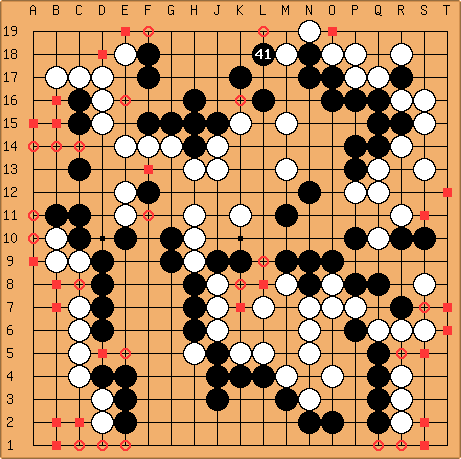 Very close, but Black center looks smaller than 6 points now, Black left edge will hardly get the 5 points counted. White probably keeps sente on the right, play the remaining sente and than the biggest reverse sente and will lead with more than the value of that reverse sente. 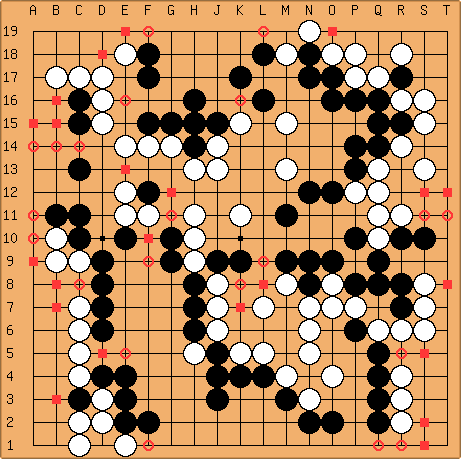