In his ThePowerOfTheStarPoint, Shukaku Takagawa looks at a game between Sugiuchi Masao (white) and Otake Hideo from the 13th Old Meijin league (GoGoD 1974-05-01b). He describes moves 1 and 3 "perfect timing," and "extremely big." 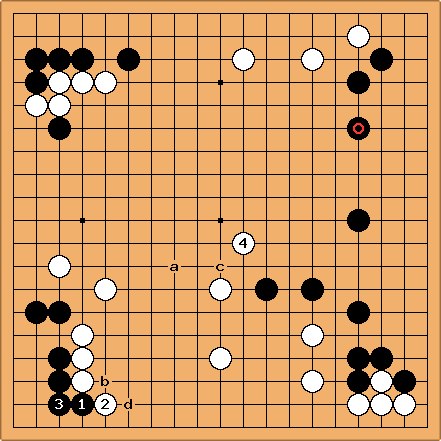 Is it just all about the aji? Taking gote here seems a pretty high price.

Bob McGuigan: I'd say these moves are sente in this situation.

Nick George: Bob, the next move is

. Is that in response?

Bob: Well I'm no pro. But because the upper left lone black stone can be activated and the left side white area is open at the skirt on the lower left it doesn't look like White can make a lot of territory there. So I would want to answer on the lower side, because of the aji left there. But what do I know?

Bill: In a way

is in response to

B a is keshi and a ladder breaker for the cut at b.

Thad: I'm sorry. I see how B a breaks the ladder, but I do not see how

restores the ladder. Can you show a sequence?

does not restore the ladder,[1] but before

, a is a dual purpose move, breaking the ladder and threatening to play c.

removes one of those purposes, so now if B plays a, W can answer at or around b

HermanHiddema: What net? If B plays d, W descends and B cuts, there's a lot of aji. A ladder would certainly solve a lot of that. Breaking the ladder is not the main purpose of

. It is a good move, expanding the W potential in the centre a lot. The ladder is just a detail.

Nick George: heh heh... nevermind... that kind of reading is what keeps me from reaching single digit kyu.

Bob McGuigan: Thinking about it a bit more I think

is almost required. Imagine Black playing in that area. It is a junction of two moyos. 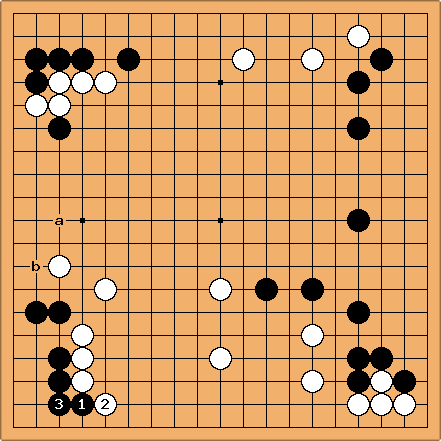 Jared: Perhaps a black play around a is more forceful now. White responding at b would be sente (threatening the corner) without the

zinger: Wow! Can you show the sequence for that? 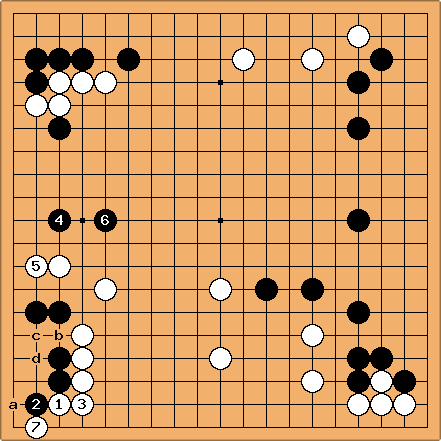 makes the invasion at

is sente. If Black ignores the sente move,

kills. Subsequently, a possible variation is Black a to White d.

HermanHiddema: This sequence switches sente (so assumes that black plays tenuki first). I think zingers question was to show a sequence where black invades immediately at

. After that, there is no realistic sequence to kill the corner really. 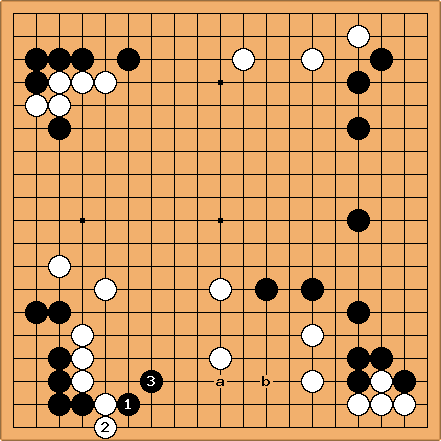 unkx80: There is also the aji at

(sniff, sniff). Together with moves like a and b, White's territory may not be totally secure.

certainly no longer is after

: after his clamp at d, her descent, and his cut at b, she captures his cutting stone by starting a ladder with two (not three) ataris from the right and one from above.

xela: My interpretation of the discussion is that they weren't talking about the

stone (which doesn't break the ladder in any case, because of the white stone a knight's move below

, although as you point out, black can still clamp, and

indirectly prevents that). Bill's slightly cryptic sentence could be interpreted as: if white omits

, and if black plays a, then the ladder is broken -- which seems to imply that with both

and black a on the board, there is still a ladder. Herman says no, black a breaks the ladder even if there is a stone at

. I agree with Herman.

Bill: Sorry for being so cryptic so long ago. How could

be a ladder maker? for a ladder from the bottom left corner broken by a?