This page is in need of attention.
Reason: this page contains possibly false or confusing advice.

This diagram represents the escape aji of the ataried stone.

Bob McGuigan: I think this example is not an example of aji per se. According to the page Aji the potential of aji is latent, i.e. it can't be used immediately, contrary to this ladder situation.

At the moment it cannot escape: it is caught in a ladder that Black can send in one of two directions [1]. Therefore white needs a double ladder breaker, or two separate ladder breakers.

Points which break only the ladder that goes toward the top left are marked with a triange.

Points which break only the ladder that goes toward the lower left are marked with a square. 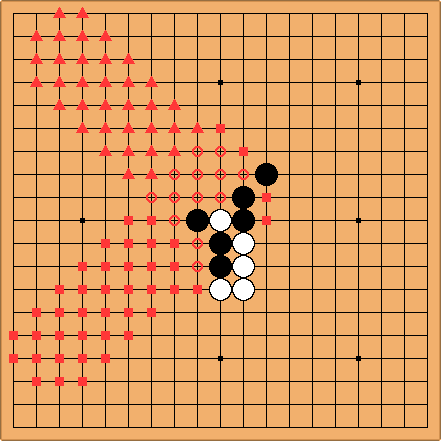 xela: I think the revised version isn't incorrect as such, but it's turning into an exercise in ladder breakers rather than a discussion of aji. I'd still very much prefer to see a position from a real game, giving a clear and specific demonstration of how ladder aji might be used. (I'm sorry I don't have time to search for an example myself right now. Maybe next week, if noone beats me to it.)

anon: I agree its mostly about ladder breakers. Even so, ladder breakers and aji are closely related topics, because a ladder breaker makes use of the aji of a stone caught in a ladder. The first diagram is a kind of blueprint for creating more realistic examples that rely on this particular shape.

Bill: I think that an exposition on ladder breakers at this level would be a wonderful addition to SL. I would like to see one. :) At this point, this page might best be considered as a stub for such an exposition. Once such a page is written, we can talk about how to classify it. :)

xela: OK then, maybe we should keep the content as is but rename the page? Possibly as a subpage of ladder-breaker? 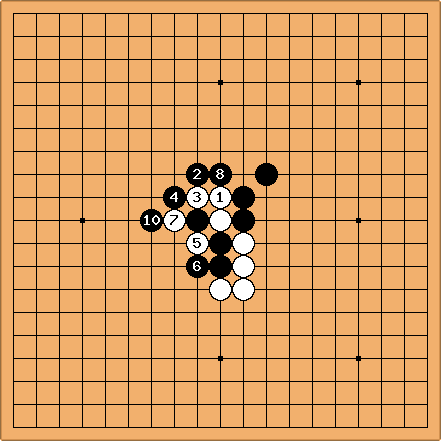