A broken ladder is a ladder in which the inner stones (the ones that form the stairway shape, which are played by the defender) can not be captured because of the presence of a ladder breaker.

Almost an example of a ladder ko (as ko is only very near, but not affecting the ladder liberties itself) played by professionals, but most of all, the ladder is not working:

broken ladder ex. 1 provided by Go4Go.net?.
I don't understand this part of the game. tderz

There is another example of a broken ladder between Feng Yun 9p and JZJ, 9p: broken ladder ex.2
I think to recall that Feng had Black and JZJ a moyo which Feng entered, where by a cutting stone was apparently controlled in a ladder.

Feng won the game because that ladder was broken and so JZJ's strategy.
However the most interesting point for me was, that Feng seemingly waited some moves before pulling out that stone (played some moves into the corner first, as she was seeking for live on the edge). I guess that was for maximising the dammage.
I sent her once an e-mail with that question, but of course Feng is very busy. I wrote already something here here on SL regarding that game. tderz

A broken ladder played out

A game that became famous because a ladder was played out despite it being broken was Lee Sedol - Hong Chang Sik - ladder game.

A ladder that is broken, although there is no ladder breaking stone 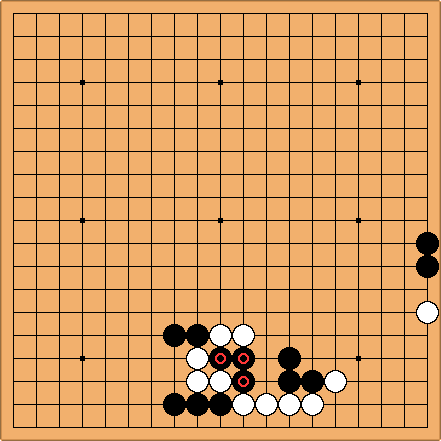 The ladder is broken, so white cannot capture the marked black stones. Can you spot what breaks the ladder? 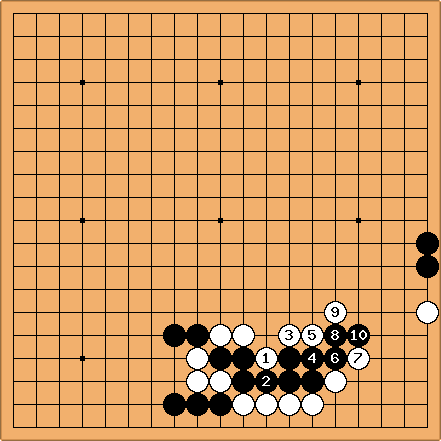 This is the only way white can start the ladder.

Note that black cannot take the single stone in atari, as white could capture the black stones by squeezing from behind. 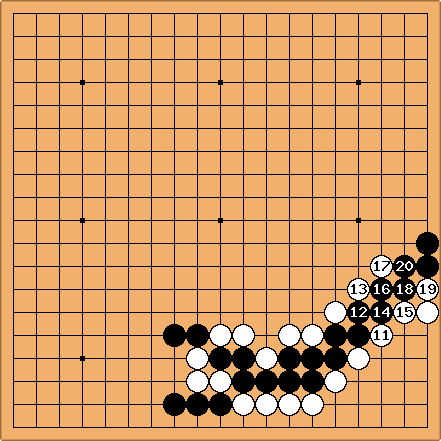 The stones on the side only turn the ladder. 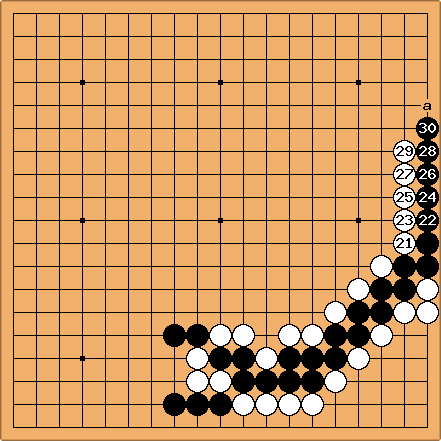 White can not steer the ladder away from its course

EdPoor Is that a joke? I think you mean that Black cannot stop the vertical ladder to the corner, and White will capture all his stones!

fractic: It just means that White has no other ways to play the ladder. i.e. moves like a don't work for White.

Bass: @EdPoor, thank you :-). (It always makes a trap designer happy when his trap catches prey..) I created this problem for the very reason that it is typical for a human player to think "there is no ladder breaking stone, so it must be useless to continue the ladder". As you can see in the next diagram(s), white is unable to capture the black stones. 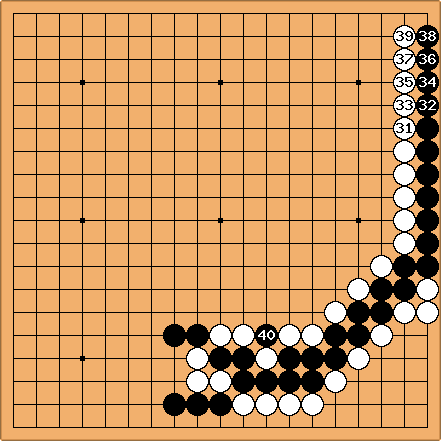 , the corner stops the white squeeze. Black is safe! 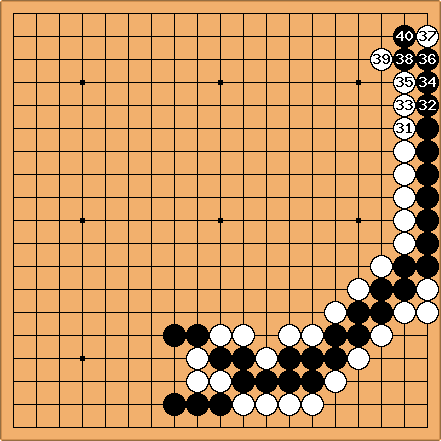 Because white cannot run the ladder into the corner, he has to resort to desperate measures. 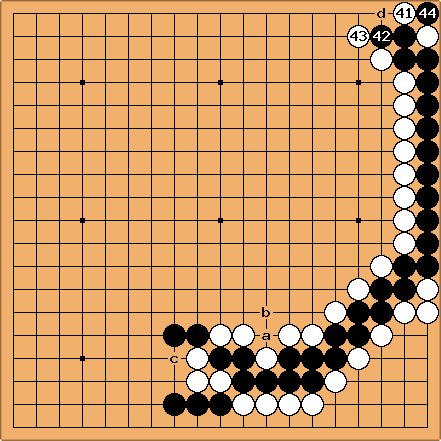 to save a ko threat for later (just in case white _did_ have a million points threat somewhere.)

Black has two local threats (the other at a), but still this ko is losable, if there is some big semeai elsewhere.

anonymous This ko does not exist. Once black plays at 'a' and white answers at 'b', black can play at 'c' instead of making a ko threat.

Bass: That is why white would answer black a at d instead. So the ko does exist, and it is for most of the stones on the board. Black gets to take the ko first and has two local threats. In theory, it is possible for white to win such a ko..