Capture stones caught in a ladder at the earliest opportunity

Ladders are a huge source of aji which should be removed by honte moves, even if it means taking gote.

There are many positions where ladder conditions allow you to capture one or two cutting stones.

The fundamental advice in the proverb is to remove the ladder entirely by completing the capture in it, and as soon as possible. 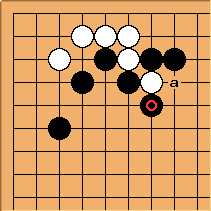 For example if Black plays this joseki, ending with the marked play to capture in a ladder, Black must expect to play once more here at a in the near future.

Large implications exist for ladder-breaker moves far away from the area. Defensive measures must constantly take the ladder into account - yielding suboptimal play locally to maintain the ladder. This is even more important in the fuseki stage - where often a joseki would end with the removal of a ladder.

It may be possible to set up a short-range capture, preventing the ladder having a whole board range. One can find a few examples (in pro games) of professionals doing that - which is fine for them: they know what they are doing. For beginners in particular, removing the ladder with a clean capture is the best course for any ladder that is long enough to run across the board (but not in the case of short ladders running down to the board's edge).

Lynx: Important to remember is that in some joseki, capturing the ladder does *not* mean taking the stone, but rather capturing the stone with a local ladder breaker, such as the keima kakari, keima, attach, underneath hane variation.

Joelr: Are you referring to 4-4 point low approach low extension, contact? I don't see any (non-refuted) ladder variations there. Can someone please embellish? 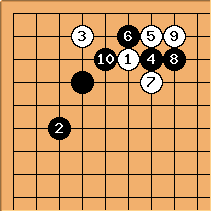 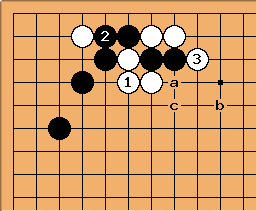 The normal move for white to complete the capture of the 2 stones when black makes a ladder breaker is b and not the capture at a. This move can be understood as having more influence and efficiency than the direct capture. It does leave white some threats such as the peep at c, but the judgement of professionals is clearly that this is drawback is minor. A pro game pattern search of GoGoD 2010 edition has 35 hits for b to a mere 5 for a. In fact a was last played in 2005, and the most recent 10 games all have b. 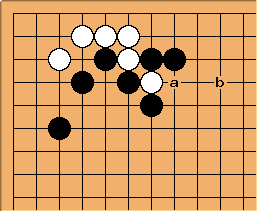 In fact in the example given at the start of this page the most common move for black to resolve the ladder is not the clean capture at a (33 hits, 42% wins) but b (53 hits, 62% wins).

Also, while taking a ladder is honte and may be right in "style" terms, it isn't always 100% needed. Just be very confident in your understanding of the game if you tenuki.