The so called carpenter's square is one of the most complicated of the basic life and death positions. It is said that anyone who completely understands the shape is at least professional shodan. It was misunderstood until the 1300s. It is simple enough as far as its vital point and status are concerned - it almost always results in a ko. However there are endless ways to set up the ko, and even more ways to defend incorrectly and end up dead anyway.

The best way to set up the ko depends to a large extent on the number of outside liberties of the black group. If Black has none, White starts by playing on the vital point. Black attaches on the first line, and White stretches in the other direction. 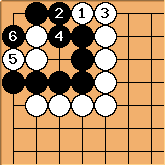 White further reduces the black eye space and after 5, the only way left for Black to live is engage in a ko. 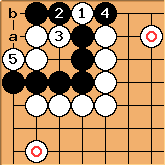 makes a throw-in ko at a or b. White can also make seki at a.

This is not as good for White as the previous Continuation diagram. 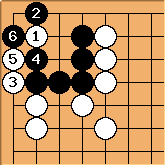 With one outside liberty, White sets up the ko in a different way. 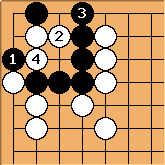 Black 4 in the previous diagram is forced: here's how Black dies by playing atari. 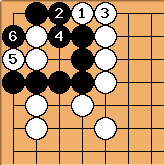 Here's why the basic method fails when there is an outside liberty. Everything goes smoothly for White until 6.

However Black squeezes White for two eyes with 2 after White first captures the ko.

It seems that one as white, one would only need to learn the method that works with 2 outside liberties, as it will also work in 1 and 0 outside liberties. As black, the other variations I suppose have some value in knowing why they don't work (or work as well for white) in the 1 and 2 liberty versions... Or have I missed something?

(Sebastian:) The difference is that the edges have to be better protected. In diagram "Two outside liberties", you need the marked stone

. With 0 liberties, you can do without.

[1] A wooden box used traditionally in Japan to measure one gō unit of volume, which is almost exactly 180 ml. Ichigou masu translates simply to "one gō measuring box".