The Simple 3-3 Invasion Slide Joseki, Attach is one of the most common continuations of the simple 3-3 invasion joseki. It is most frequently played when Black aims to gain strength or build a wall in sente, particularly when the three-stone wall comes under attack. It can also occur as a sequence transposition when Black would like to avoid the flying knife joseki.

In response to the diagonal attachment, White has several options to choose from depending on the (A) their desired direction of play and (B) how much thickness they are willing to concede to Black. 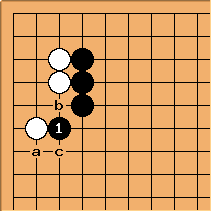 When to play the hane? 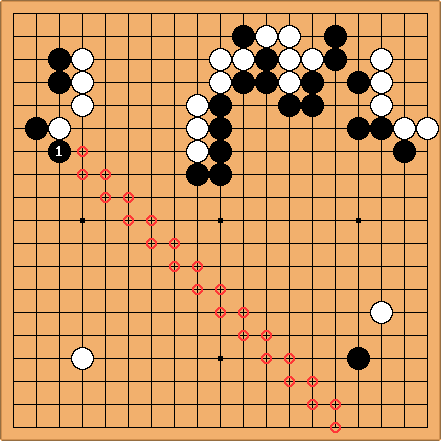 Although it is an uncommon move in professional games, the hane with

is best understood as a move that recognizes and allows White to get thick. An example of this is seen in Choi Cheol-han vs. Paek Hong-seok, whereby Black chose the hane because there is clearly little chance that Black will be able to pincer or attack White's wall in the future.

In this board position, there is not much of a cost to giving White free thickness, and it could be argued that White is a bit overconcentrated, since white will not be able to use their wall effectively to attack any weak groups.

Note that the ladder is good for White, so White does have the option to hane below or to cut inside to claim the corner territory. However, in this board position, the left side is wide open, and Black has declared that that they believe the left side of the board is more valuable than the corner. Do you agree with this assessment? Sometimes it can be difficult to make this judgement.

On a wide open board, strong AI programs typically do not criticize the hane.

Can Black cut on the outside after the hane? 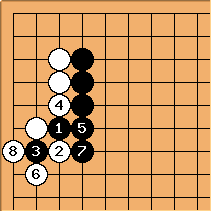 It is possible for Black to cut on the outside with

hane. This reverts to the double hane joseki from the three-stone wall, which Black often plays as a form of kikashi to strengthen themselves in sente.

yuzukitea: However, this move is rarely seen in professional games. It seems that Black has much better methods to obtain a wall than the variation depicted here. Notably, by tewari analysis, here we see that Black did not gain very much compared to the normal joseki with

Why doesn't White block the hane and switch sides? 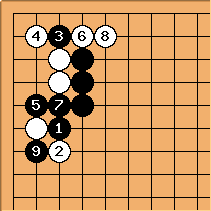 If White blocks the hane with

and Black cuts with

, taking the top side is not very appealing for White. The reason for this is that once White comes out with

atari greatly damages the vitality of White's two stones on the left side, turning them into trash stones.

It would have been much better if White played the extend instead of the hane, so this result is unacceptable for White.

White should choose a joseki more consistent with their goals at the very start. 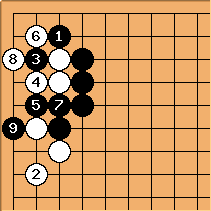 But technically, the corner is not fully captured. If White resists with

, White can take back the corner, but then White loses the left side with the

atari, which also has the potential to turn into a ko. This is inconsistent with White's desire to develop a position on the left side. Clearly, if White wanted the corner, they should have chosen a joseki more amenable to their goals, as white can get a more comfortable corner with a different variation.