There is Death in the Hane

This proverb, "There is death in the hane", refers to the fact that the hane on the first line is a very common method of killing groups. The main purpose of the hane is to reduce the space for making eyes.

Definition: Hane -- A single stone that "reaches around" the outside of an opposing unit diagonally, adjacent but unconnected to an existing unit. ~~ Dr. John C. Dealey

This article assumes that readers know how to prevent escape on the first line. 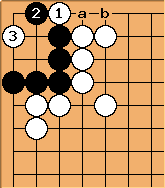 kills the Black group with a bulky five dead shape. If Black tries to capture at a, this does not gain an eye, and White can block Black's escape at b. 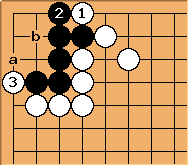 For example, this Black group (an L+1-group) can be killed with the hanes at

. If Black blocks at a, it will turn Black's interior space into a dead bulky five. White can then kill Black with a placement tesuji at b.

Notice that in the above examples, the hane stone is not defended when put into atari. Instead another hane or a placement follows. That is because capturing the hane stone will result in a false eye.