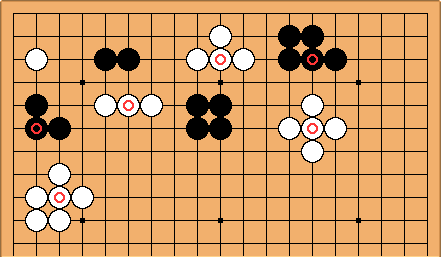 This board gives an overview of the basic killing shapes.

If the eyespace of a group can be almost filled with one of them, it can be held to a single eye. If the surrounding stones are alive, the group is dead.

If the stones are captured, the circled stone indicates where to play next to prevent two eyes (vital point).

Here they are again as spaces of marked points: 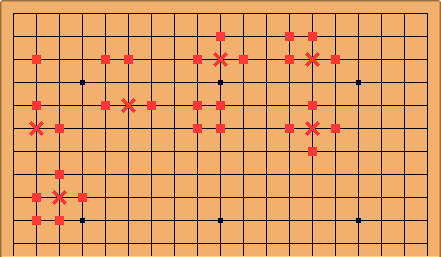 is the vital point that needs to be played to kill to reduce the shape to one eye.

is given the shape is already only one eye. 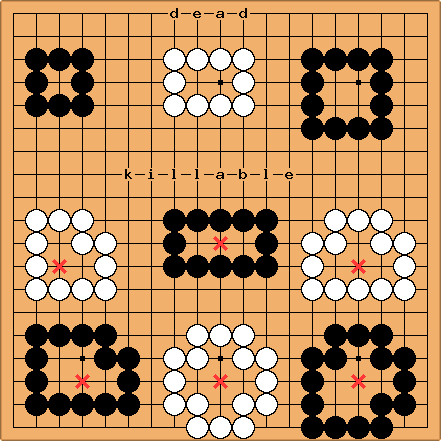 are the vital points.

And this is how they will appear in games with a full border of black or white stones. If the border isn't complete the group has even less chance of life.

These are of course the same patterns three times over. The standard way to look at the shapes might be like this: 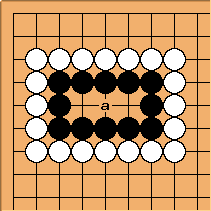 Here it is completely clear what is meant: the vital point is at a and the black group lives or dies according to whether Black can play there first.

The shapes, however, must be visualised in one or other way, to get answers about life and death questions. That may be long before the completed formations are in place on the board

This shape, a Greek cross, is the key killing shape, from which the others may be derived. The killing point to prevent two eyes (when these stones have been captured), is the center point

You can learn more about these killing shapes at their separate pages:

With these killing shapes, you can almost fill a wider range of killable eyeshapes.

One corollary of all this is that a group that forms a single eye outside the corner with no cutting points that has eight or more points is alive unless the opponent can form an eye inside, or a ko. Often this is erroneously stated as an eight point eye is alive.

As per request on CoffeeMachine, I'll add a bit of information here for ease of reading. All of the above mentioned killing shapes have a vital point that can be exploited to kill any chance of two eyes. I will display them here. Many of these play out to be smaller shapes (for example, Five in a Cross often becomes Straight three or Bent three) 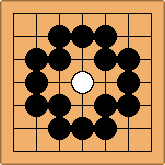 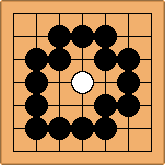 [1] This is almost true of the rabbity six, but you can form a bent four by removing two stones.