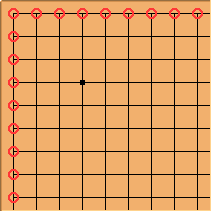 The first line is the entire outside line defining the playing area on the go board.

Plays on the first line become common during endgame, and in life and death