Have fun with some blunders here. 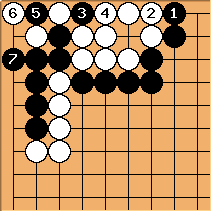 was definitely a mistake here. White had some possibilities for ko too, but some persistence... -- HolIgor 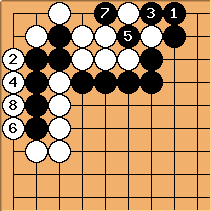 The problem here seems to be that White wants it all. Instead of trying to defend two stones, which are not directly relevant for the capturing race, White should just start reducing Black's liberties straight away. Black will capture the stones but arrive too late to save the corner.
White can of course choose to play the ko (after

), but it is probably not favourable. 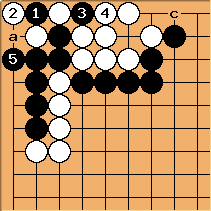 Black can try this to kill White. If White misreads the position, playing

is suicidal. (White can resist with

But of course, White should not respond to

and make the group live. Black will then play a to make two eyes for the black group in gote. Similarly, if Black plays

, White should respond at 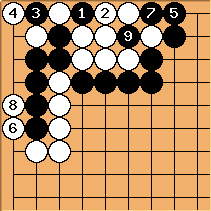 Black does not choose to live gently (i.e. thinking of winning the ko) and then throws in at

. White is now behind in the fight with no internal ko threats. -- Dave Sigaty

Bill: This is a complex and difficult position, with different options for ko, seki, and independent life. Proper play depends upon the rest of the board, not only the ko threat situation, but the sizes of other plays. I think I know correct play when neither player has a ko threat and the other plays on the board are of moderate size. 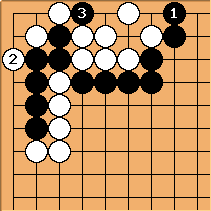 is the vital point, I believe. 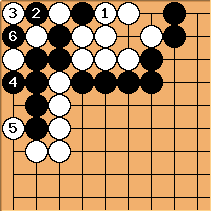 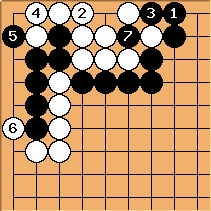 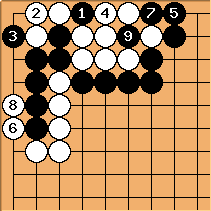 threatens to make a second eye with 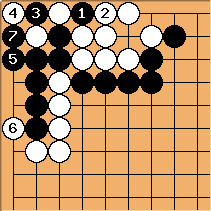 is not so good.

throws in and kills.

happened in one of my games recently. I was so glad. The correct move is to capture at a. -- HolIgor

This happens quite often with weaker players. Black decides to save the marked stone and plays

becomes a totally wasted move. Correct moves are at a or

depending on the situation. Then Black has sente in this corner. -- HolIgor 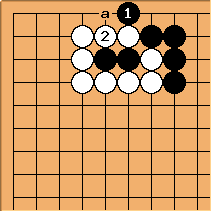 Amazing how often this happens at my level (5k* IGS).

is a mistake. After the correct answer at a

is in atari. It is small: but several small things like this and you've lost the game. -- HolIgor 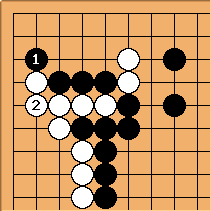 What a silly move 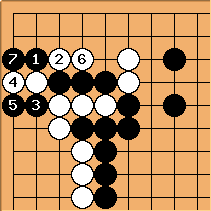 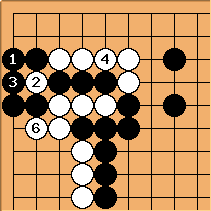 Can White kill or is there a ko in the corner? 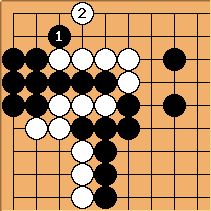 Robert Pauli: I'd say there is no ko. W has no problems to capture. 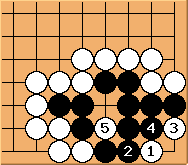 Definitely I'm not Black! I just decided to test Black... 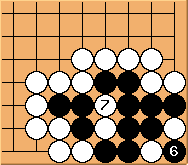 are wrong moves, I guess you can figure out why yourself. :)

solves this problem. As I see it, White cannot kill any stones here without help from Black. ---PokaMyoshu

I've seen this happen often with beginners, and done it myself a couple of times too. White just played

, and Black went at

were one point to the left,

would have been good. -- Bisqwit

Looking through some of my old games I've found this funny ko threat. HolIgor

Robert Pauli: Since in symmetric positions best play "absolutely certainly" is in the center, and a and b doubtless are miai, I left the scene . . .