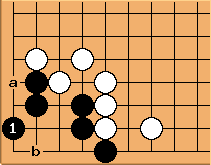 makes miai of a and b to live. 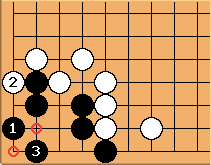 , there are real eyes at the circled points. 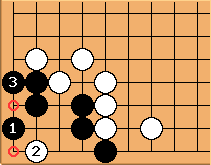 , there are real eyes at the circled points.

Charles I have had an off-line query about this. 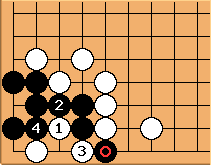 What if we get the plays up to

sets up an oiotoshi. Now if White takes

, Black gets eyes by playing atari at the 1-1 point. 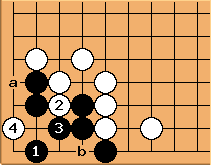 The other 1-2 point is not the solution. White pushes through with

and plays at the vital point

, making miai of a and b for the kill.

The 2-2 point doesn't provide life either.

and creates a situation very similar to problem 1. As in that problem,

is the vital point, and White strikes it to kill Black.

at a is probably even a better way for White to kill.

is OK, but playing

at a is a far better way to kill. It avoids the bent four in the corner by the sequence Black a, White b, Black c, White d altogether. 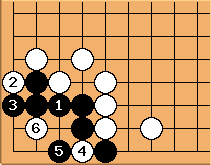 One would think that enlarge the eye space with

suffices, but it doesn't.

White says "There is death in the hane" and plays

. After the eyespace is further reduced with

, Black is left with a bulky five and White strikes at the vital point.

unkx80: After the hane at

, Black effectively has an L-group. 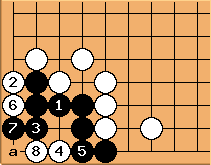 This is just one variation. Note: Playing

would make Black play at

and White at a. This is a bent four in the corner shape and it's dead too, but if you can avoid that shape and kill in a simpler way, it is better to do so.