Born Tsuchiya Heijiro as the second son of Honinbo Shuwa, when the heir to the Hayashi house died Shuei was adopted by Hayashi Hakuei Monnyu to carry on the house. His name became Hayashi Shuei (Shu- from Shuwa and -ei from Hakuei), and a few years later, he succeeded the Hayashi house as its 13th and final head. Following several years, a period of instability in the Honinbo house caused his youngest brother, Honinbo Shugen, to ask Shuei to take over as head of the Honinbo house. He accepted and merged the Hayashi house into the Honinbo house, but soon ceded the position in favor of longtime friend and former Shuwa pupil Murase Shuho. However, Shuho's untimely death just two months later lead Shuei back into the position as head of the Honinbo House. In 1906, he attained the title of Meijin, becoming the ninth person to have done so.[1]

Shuei was noted as a late bloomer, not reaching his peak until 1896 (the age of 44). However, when he did he exceeded his contemporaries by a fairly wide margin. The other best players of this period (e.g. Tamura Yasuhisa, Yasui Sanei) appear to have needed at least the handicap of the black stones to play him. During this time he held a monthly study group at his residence, thus many of his surviving game records show a very large number of handicap games as White. He also engaged in a number of jubango, and one photo shows Shuei in a fine beard (below). His mature style is marked by a preference for simple moves over complex fighting, preferring to win by out-playing the opponent on a global scale. For this latter reason his mature games have often been admired for their flow, superb positional judgement, and lack of 'unnatural' moves. This played into a deeper use of a miai strategy, sometimes revealing itself on a grand-scale, earning him the nickname "Master of Miai." He became an expert of amashi and shinogi, speedy openings, and innovation regarding the importance of the 4-4 point and center value. He is also noted for his interesting predilection of the centre- facing L-shape (see diagram).[2] 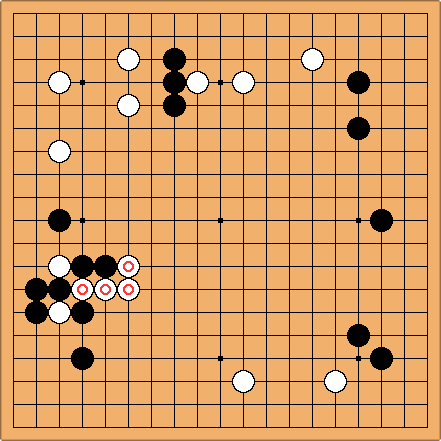 ...[Shuei] was the strongest of the Meijins and Honinbos. There were many strong players, like Shusaku and Shusai, but I definitely think that he was stronger than those two.

He had superb positional judgement. There's nothing unnatural in the flow of his moves... I always have the feeling that I'd be no match for him... I'm far below his level, but I like his go. The brilliance of his play from the fuseki to the middle game is outstanding.

These appear to be Fujisawa's true feelings and not just modesty since after two more questions he also says that no Japanese player is currently a match for him and that his go is on a higher level than that of his potential challengers for the Kisei title.

When editing a collection of Shuei's games in 1976, Takagawa Kaku wrote[3]:

When I was young I often enjoyed playing over the games of Shuei. That was because I liked the image of him winning without doing anything at all unreasonable. But today I wonder: did I really understand Shuei to that extent? In doing the commentaries for this book, I perused his collected games again after a long interval, and again was made to sigh in admiration at his strength. In particular his games as White after he reached 7-dan hide a fathomless strength amidst a serene and well-balanced flow, which we can perhaps describe as flexible on the outside, unbendable on the inside. In brief, the characteristic of Shueis skill at go is not just about local things such as his skill at evaluating positions or his skill in seeing moves, but his mastery of go itself.

Modern professionals have called Shuei "Meijin of Meijins" & "No-power Meijin," and continue to study his games more than other player from the classical period.[4] His Complete Games collection (秀栄全集) published in 1911 was the first collection gathering all games of a particular player. Today, 277 of his games are known.

Spirit For some time now I've been very interested in Shuei's style. Much to my dismay I found that it's very hard to find any of his games records. I've managed to compile about 250 games so far, many from his early career. But he should have played at least 3 or 4 times as many. If anyone knows of a good source - electronic or in paper please let me know.

Bob McGuigan: That book is out of print, unfortunately. I have a copy and it's a wonderful book. A more recent book, published by the Nihon Ki-in as part of a seven volume series of books on great masters of the past, is this one:

流水秀栄―古典名局選集 but it seems not to be available from amazon.co.jp.

Spirit I have a copy too (no. 17) and it's indeed a great book. I've searched on amazon.co.jp. But even with google translate it's not too clear what they are though unfortunately.

hnishy: 250 is fairly near completion; 277 of his games are known today.