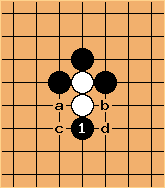 is the nose tesuji, also known as a nose attachment, often overlooked by beginning players.

This tesuji is sometimes incorrectly referred to as a head attachment; this is undesirable, as it fits poorly with Japanese usage and other terms.[1]

takes away one of Whites three liberties, making miai of a and b. White may try to hane at c or d, but a Black atari at a or b is often an effective response. 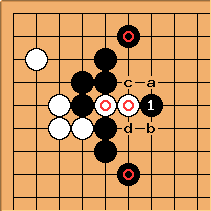 The nose tesuji works in conjunction with the surrounding stones. Consider this contrived example. The

stones make the nose tesuji effective, blocking White whether she tries to escape with c or d. If White a then Black c; if White b then Black d. 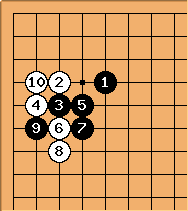 Consider this takamoku joseki (a variant of the 4-5 point 4-3 approach outside contact joseki). 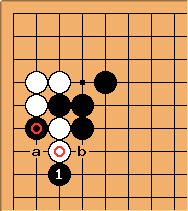 is the nose tesuji. If White a, Black seals her in from the top with b. If White b, Black pulls out

with a and her stones are floating. 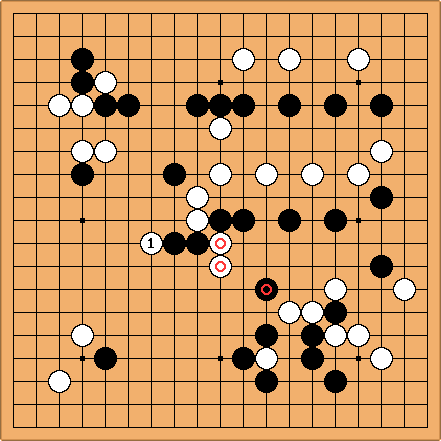 , the nose tesuji, here functions as a kind of inducing move. Blacks (Yamabes) previous play was at

. Having cut in the centre, Whites problem is how to handle the

cutting stones and the large weak group above at the same time. 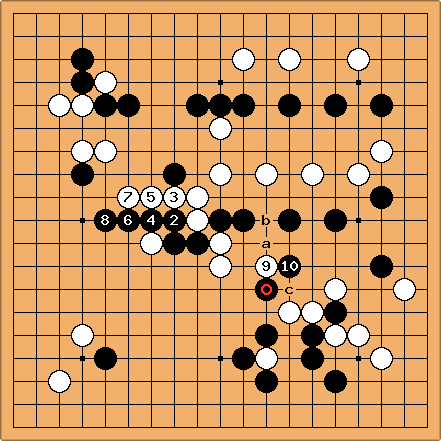 White does succeed in dealing with both areas of immediate concern. After

there followed White a, Black b, White c. At that point White had enough threats against

and the marked black stone to fight on, locally, and had isolated Blacks group on the right side. 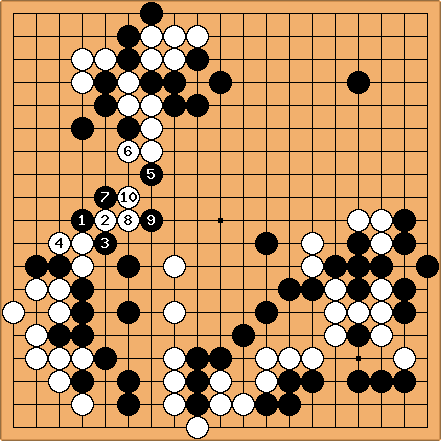 In the second game of the 5th Ing Cup on 2004-12-28, Chang Hao, playing Black, unleashed no fewer than three nose attachments in the course of nine moves ( 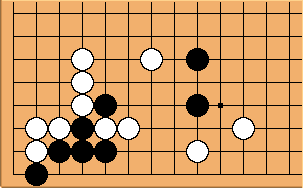 This is the first problem in Golden Opportunities. 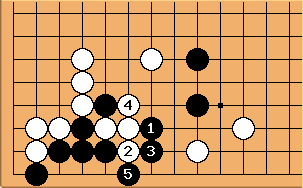 Patrick Traill: What is incorrect about calling this a head attachment?  that is an alias for this page, so it presumably does not mean anything else! Should we perhaps rather say that this usage is deprecated, or that nose attachment is preferred?

Slarty: Given hane at the head of two stones, yeah. However, nose is more descriptive.

Patrick Traill: Is it perhaps incorrect in the sense that it is not a literal translation from the Japanese? If so, is hana here only a homophone of hana=flower as in hanami-ko?

John F.: head attachment may not be at the level of capital offence (Latin pun intended) but should probably be more than just deprecated. Keeping to the correct nose attachment helps translators. There is a variant of the phrase when the string of stones attached to is long, which is attaching on the tengus nose (tengu is a kind of goblin with a long nose). If head attachment became the norm, the poor translator would have to conjure up some unconvincing new phrase for that. And there are other nuances that feed into translation issues. Head in Japanese is used when you poke out of an encirclement. Poking your nose out instead is a bit daft - in English, too: you poke your head out the window, but poke you nose into something. Head/atama thus carries a slightly more forceful nuance, not the sort of thing you play a delicate tesuji against.

Hana = nose is not a true homophone of hana = flower, at least in the standard dialect. The pitch pattern differs. However, hana = snot is a homophone of Hana = nose. Make of that what you will :)