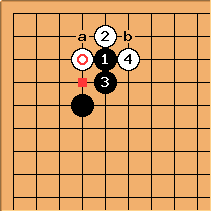 is not so often seen now in pro play, because it relies in one major variation on a ladder. Nowadays, joseki involving ladders may be experiencing a decrease in popularity. See Ladder strategy / Discussion.

Deviations from the sequence up to

are very rare.[1] Tenuki with

, it is expected Black will cut at a or b. White will capture the cutting stone and Black takes either territory or influence. 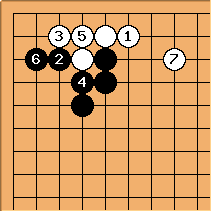 On a few occasions in pro games,

is played. This continuation is typical: White's position is low, and Black has influence on the left side. By playing this way White does limit Black's choice. 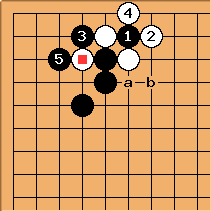 This is by far the most common variation, with Black taking the corner. Since

White a is often played immediately, since White does not want to allow Black the severe play at b. 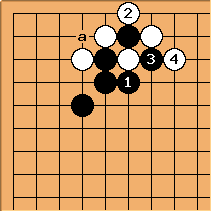 On the other hand Black can still play for influence here, with

instead of the cut at a (previous diagram). After 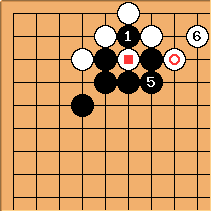 elsewhere as ko threat and reply, and

is acceptable to Black in most cases: 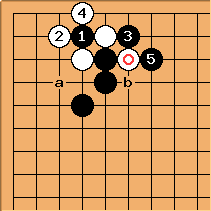 in a ladder aren't seen so much, now. After that Black's ladder capture at b, and attempt to force White at a, are important follow-up plays.

See further discussion at Capture the cutting stones in joseki 1.

is known (Hashimoto Utaro) but in a context where

related to a ladder question.

at the square-marked point, playing into bad shape (see six kyu noseki) has been played by Sakata.

is known in a game of Go Seigen, and as played by Cho Tae-hyeon. 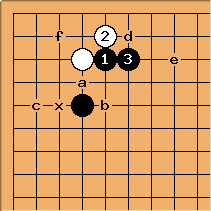 But then, how would you answer to Cho Tae-hyeon's variation? I've thought about this a lot and haven't come up with any good sequence for white.

xela: The key point is a, by analogy with a well-known joseki. Black will reply at b, then white can play c to make life in the corner. White can also force at d before playing c, expecting black e, but black can reply at f instead to make things more interesting :-)

(Why is c the correct shape to make life? There must be some interesting variations behind that choice, but I don't know, I'm just copying what I see in pro games... Perhaps white x instead allows black to seal white in with sente?)

Which one is better for black of 2 follow ups below?

The answer is obviously the second one. So, white chooses the first follow up, so it's joseki sequence. 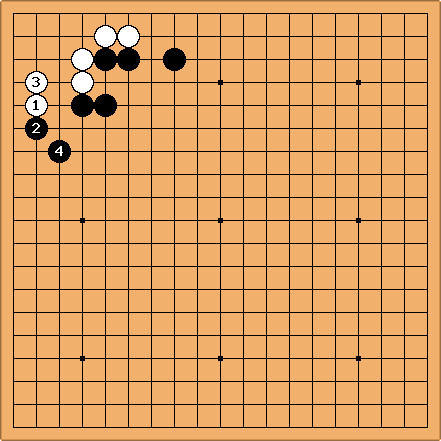 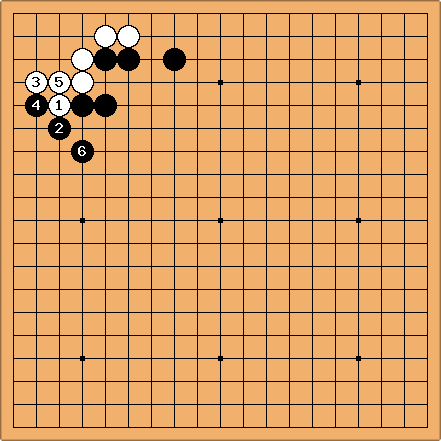 Question follow-up: But according to this Six Kyu Noseki, black could set up a double-hane like this, if white plays as xela suggested: 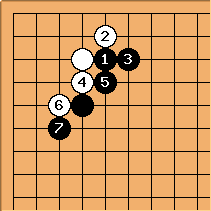 And then there's no good continuation for white?