The second line connection is a special case of what is known in Japanese as watari (connection underneath or near the edge).

stone connects her two strings of stones on the second line. In this diagram, there is no way that Black can cut them apart. If Black cuts at the circled points, he is caught in a ladder, a chapel in particular. 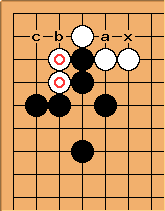 However, the connection on the second line is dangerous because the opponent can cut on one side to be able to cut on the other side in sente.

stones are in danger. If Black cuts at a and White plays x without thinking, Black can cut at b in sente which allows him to play c and capture the two white stones. In a case like this, where the cut at a does not threaten anything in itself, White should answer the cut by connecting at b herself, and Black will have lost his stone at a. (In addition, White will say 'thank you for removing my weakness' because a black play directly at c would have been a big endgame play, but now is no longer possible.) 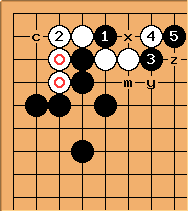 White cannot cut/capture at z, because of Black x-m) 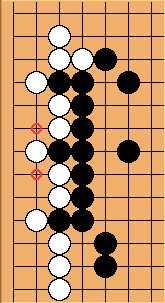 Some connections on the second line just do not work, even if you reply 'correctly' to the cuts. In this example, Black's cuts at either of the circled points will work.

Even with a larger distance, the connection does not secure all stones. Black can play at the circled point.