Chinese: 大猪嘴 (da4 zhu1 zui3) (only the basic J group and not the straight J group)
Japanese: (no name)
Korean: - 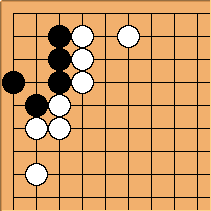 The black shape in the diagram is the basic J group. It has the same status as an L+1 group: it lives or dies according to who has sente. This basic shape is known in China as the Big Pig's Snout. 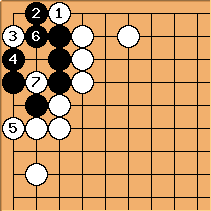 The correct way for White to kill this shape looks like a complete display of the principal killing techniques: reducing the eye space with a hane at

, followed by a placement on the vital point at

, followed by a descent at

and a throw-in at

The best way for Black to live is by playing at

, giving him six points of territory.

The escape with one missing white stone 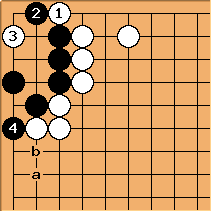 There is one caveat to the above discussion on the J group though. Without a white stone at a, Black can play at

, aiming to escape at b. 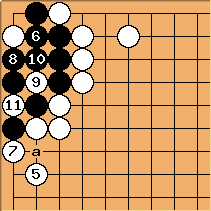 White has to respond at

(if White responds at

instead, Black can start a ko at a), and the result is a ko.

will finish the black group off. 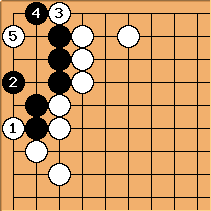 This version of the J group is definitely dead after

. There is no chance for a ko.

The J group with an extra hane 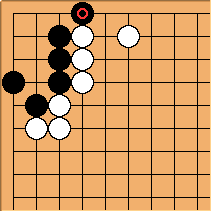 With the marked hane, Black is alive. There is no ko. 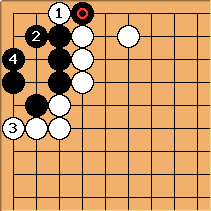 For example, if White plays

. Other details are left for the pleasure of the reader.

work too. But Black should not play

to the left of

- Black dies in a similar way to the J group without hane. -Han 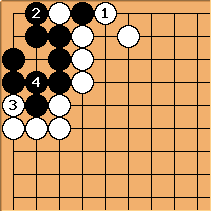 White can make an endgame gain with the given sequence. -Han 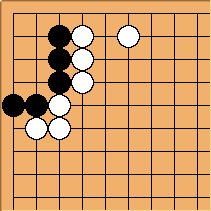 Black can improve on the status of his corner by descending to the edge instead of making a hanging connection. The best White can do now is turn the corner to ko (though White also has the option to unconditionally snip off the two lower black stones leaving the main Black group alive, which might be better in rare cases). 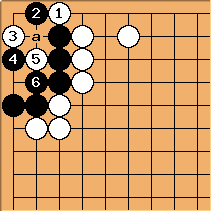 There are several good ways to produce a ko and one less good way. A representative good variation is shown. 1 can be at a, or with 1 as shown, 3 can be at 5 or a, each giving a more-or-less equally good result with White getting to make the first ko capture. 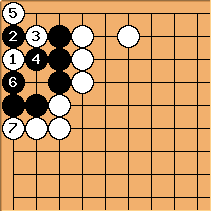 This way of setting up a ko is less good. It only works when the black group has no external liberties and Black gets to make the first ko capture (though if White wins the ko, she removes a part of the black group from the board). 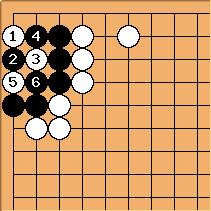 Failure to make a hane before making a placement at

Straight J group with an outside liberty 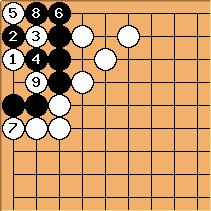 [100] If Black has an outside liberty, the second ko doesn't work because he can live by answering

this way. He sacrifices two stones and plays 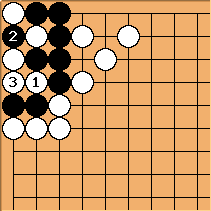 Black is alive in sente for an average gote endgame by white. This result is very favourable for black over being killed straight. If Black had expected 6 points in the corner - he needed to defend the two stones and against the hane - he now has 4 points (B = -2). White on the other hand made 4 points by the two-stone capture (W = +2). As a net loss of six points (B = -2 -4), Black gains hugely in this exchange for not playing gote twice. White might think in terms of "I made 6 points", but she has to realize that she lost around 13 (approx. 19 for capturing the group minus 6 points) points by starting with the wrong move. 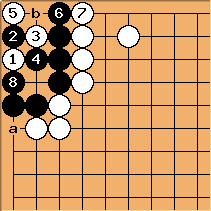 When there is no extra outside liberty, as here,

instead of a keeps Black short of liberties. Black can't play at b now and must play 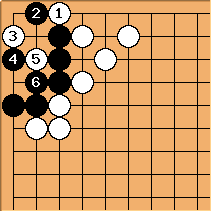 All 'good' variations of the first ko from the previous section still work with the extra outside liberty. 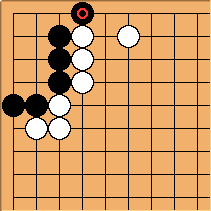 If White plays first, the status of the Black group depends on the number of outside liberties. 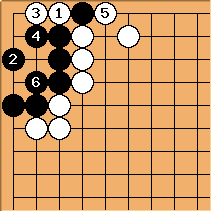 is a wrong way to kill.

is a tesuji that ensures life. 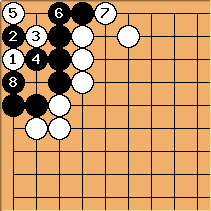 kills the Black group in a ko when Black has no outside liberties. 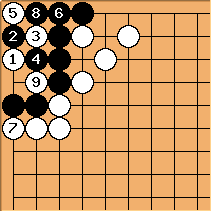 The straight J group with extra hane is unconditionally alive when Black has a outside liberty. However, White can capture two Black stones via the sequence from 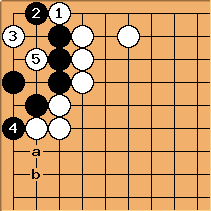 Life and death evaluation of shapes is normally done without the ability to escape. Look at the funny white 'wings' on the outside of the L-group in the first diagram of L Group. Even the L-group is alive in sente if descending to either edge is a threat to escape.

The present shape would normally be studied/evaluated with a white stone at b to prevent such an escape. In such a case (no escape)

finishes off Black. In studying life and death, then, we need to learn the basic techniques. Next, memorization of the fundamental cases can be a powerful tool to improve play in real games.

However, as much as the vital points and main continuations, we need to thoroughly understand the various conditions such as no escape, no/limited outside liberties, relationship to the corner, etc. that may apply to each case. Small differences in game situations can turn around any of the proverbs/rules of thumb that we have studied so hard!

That's why I try to teach fellow beginners the merit of a net above a ladder. The ladder is a non-local move versus a local move: you need to look at more parts of the goban. Ladders may be easier to pattern-match; sure - but a ladder's status changes more rapidly than a net's.

I totally agree with DaveSigaty and JanDeWit on their views. Actually, I have wanted to add the part provided by DaveSigaty after I made the changes but I was unable to get onto this site then.

fw280?: We make J group instead of straight J, when we have hane. Because J group with hane is better than straight J.