This is a quite special endgame technique.

exchange has just been played: so that

is the hane play in the title.

In this case the descent

is the best available defence for the

stone. If Black played at a White might at some later point gain by playing at

Since b is a neutral point, White will have no reason to play there except as a ko threat.

Certainly White should start at

. Then there are three threats. If

, White has only one threat.

could seemingly improve on

of the previous diagram. There is no real difference to White's threats.

But now Black has no threat at a. With the given configuration White has two threats, net, here.

Fhayashi: For my own clarification, the alternative to the above, playing at

, allows White a, Black b, which is one point worse than the above, but offers White no ko threat, right?

Charles Correct. Or, being pedantic, White a is likely to be 2/3 point in sente.

By the way, there is no 'exchange rate' in the endgame between points of territory and ko threats. I think this might be added to the assumptions of yose problems page.

In real life there might for example be a large approach ko left on the board, meaning that one would trade-off points against ko threats to some limited extent.

unkx80: May I also mention in passing that hane-descent is also commonly used in life and death, as in the example below. 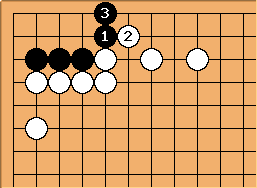 is the only possible way to make life. 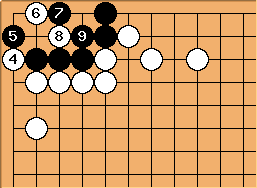 The result is a ko.

Charles It's obviously a day for nit-picking: 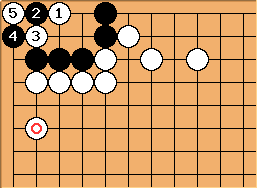 is usual in pro games. Still a ko, but in realistic position (

not necessarily present) this might lose fewer points if White loses, and certainly is more solid for White if she wins by capturing

I see this is discussed on the J groups page; but I seem to be disagreeing with the detail of what is said under straight J groups.