Stick to Your Strategy

It is a common mistake to change your mind halfway through a game or once you see that the results of your initial play were not as expected. In the opening, this often translates to defending a 'territory' based on the fourth line (open skirt), attacking a weak group in such a way that you end up with no gain and/or a weak group yourself, etc.

Often this means that you find yourself responding to your opponent's play more than you play what you want to play.

During the opening the rest of the game is outlined, and you should spend more effort defining a clear strategy than actually defining territory. Hence, you should expect a certain kind of response from your opponent to your plays. If that is not the kind of response you want, then you should not play that way.

This may sound obvious to some or quite harsh to others, but in Go you cannot 'have your cake and eat it'. You must assume that your opponent will exploit your position just like you would his.

You should therefore choose your position carefully, in the knowledge of the implications of it. (Relying on trick plays is one of the bad habits.)

However, as with so many snippets of Go 'knowledge', this should not be taken as eternally rigorous. Any good plan is also flexible enough to cope with unexpected responses and situations. Some would even go so far as to say that you should have No Plan In The Opening.

I often phrase this as "It's better to make one error consistently than a different one on each move." - Andre Engels

Dave I have always liked Jane Austen's view on this, expressed in the 19th century British novel Pride and Prejudice,

"Would Mr Darcy then consider the rashness of your original intention as atoned for by your obstinacy in adhering to it?" (Elizabeth to Bingley)

Imagist I think there's basis in pro games for changing strategies midway through a game, in Takemiya's games, in particular. Because people are familiar with his style, people often are very careful to keep him from building a central moyo, and in such cases he is frighteningly good at attacking to reduce once his moyo is spoiled. I think the problem comes more when players try to, say, build a moyo out of a low position or try to attack when they have focused on territory and given their opponent lots of thickness for counterattacking.

aokun I'm not sure what I think of this idea. Good opponents can frustrate your battle plan and you have to be flexible when that happens. Does the principle of "sunk costs" not apply? You are trying to win the game from the position you have, not justify in retrospect the moves you already made.

I also think the value of a strategy depends somewhat on whether it has been divined by your opponent. Over the short run, during the ordinary leaning attack, perhaps, the opponent knows just what you are doing but can only defend one side at a time. But any longer term plan, if your opponent knows about it, can be broken up by superior timing. We've all had the experience of waiting one move too long to play key moves. There seems to be much less justification for not altering a game plan if the opponent is clearly aware of it.

In fact, I have my own little proverb that relies on your opponent's fidelity to a game plan as a weakness: "Attack your opponent's theme." When making attacking, reducing and endgame moves, the biggest question of all is whether your opponent will react locally and as expected, meaning you can get your valuable moves and keep sente. I find that if I can identify the opponent's "big idea" and play moves that threaten its value, the opponent is much more likely to be compliant.

xela: I think it's important to consider the meaning of "strategy" as "making your stones work well together." There are games in which "strategy" can mean "having a secret plan that would be spoiled if the opponent figured it out too soon," but go is not that sort of game.

Example: if, say, you build a thick position, then "sticking to your strategy" means using your thickness by starting a fight, not by trying to make territory. Your opponent should be aware of this, and should be looking for a strategy which neutralises your thickness. The clash of strategies is one of the things that makes the game interesting. It's silly to hope that your opponent won't notice that you've built thickness, or won't know what it means.

Compare this attitude with the idea of trick plays.

Mef: I think the best example I can think of this a common mistake beginners will make shortly after learning about the 3-3 invasion. They know the 4-4 is a good opening move, but they don't want to lose their corner, leading to play like this: 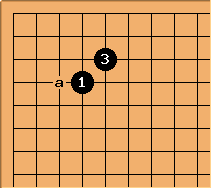 This sort of play completely ignores the strategy of

. A 4-4 stone is meant to finish the corner in 1 move, and allow for rapid development down the side. If black really intends to spend a second move to enclose the corner a better choice for

would be the 4-3. This is not to say there is never a time when closing the corner with

is good, just that in general it is better to stick to original intent of the moves.