lavalyn: Supposing from an aside that the 3-3 invasion is unappealing (think 3 stone handicap game), I will eventually have to make an invasion into this region. This usually starts with White at 1, playing high to retain influence. Sometimes Black answers with 2, in which case I normally choose between a or b. When this situation came up, though, a 5d player suggested 3. My initial thought is, heavy and inconsistent. But I'm not all that good - so what exactly is the logic in this move? 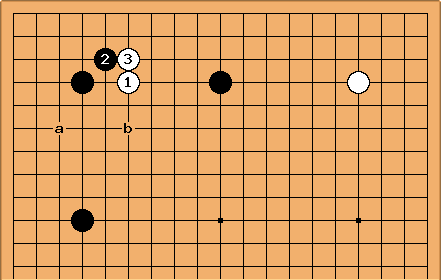 Dieter: As this reverts to White 1 @ 3, Black 2, White 3 @ 1, the question reverts to "Is White 1 @ 3 bad". The fact that Black 2 is a good, aggressive answer, does not mean that White 1 is wrong. Invading the star points with a keima kakari is normal, though one has to be prepared for Black's attachment. 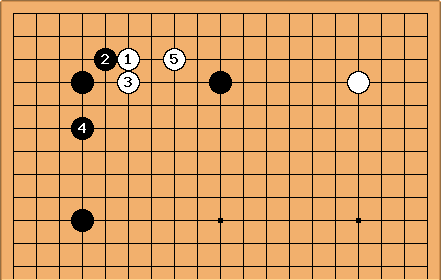 lavalyn: So, is White 3 here any good? The same heaviness complaint applies and I've now lost the original influence intent above. This is the type of play I'd make in 9 stone, not 3. 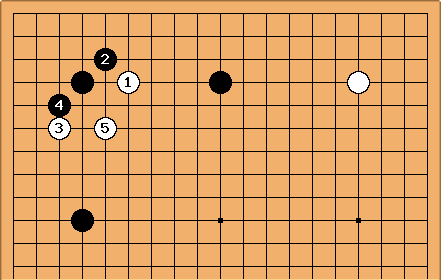 To contrast, is Black 2 in a good position now? I have much fewer reservations to the Black 4 kick after White 1. 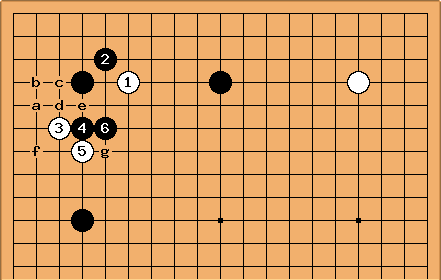 unkx80: How about playing Black 4 and 6 to divide the White groups?

Charles Matthews I think White now at a is good shape, because Black b allows White c which is pleasant for White.

unkx80: Got your point, thanks.

DaveSigaty: I think that exchanging b for c is too good to expect. I think that Black can simply play c to secure the corner, leaving White split in two with the original White stone looking particularly lonely.[1]

Alternatively Black can play "d". If next W "c", B "e", W "f", Black captures the corner with "b". If instead White plays "b" to take the corner, Black can cut off 5 by playing atari against 3 and take the outside. In this case the exchange of 1 for 2 looks bad because it limits White's corner.

I think that White has to play at "d" after 5 in order to get full value for 1. If Black connects against the cut, White slides into the corner. If Black blocks in the corner, it looks like White can push at "g". 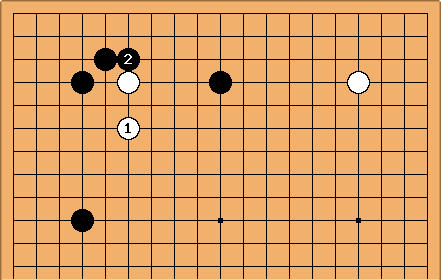 dnerra: I agree with the advice you got. Imagine you continue lightly with White 1 as in one of your suggested followups. Black 2 is a thick move. It pretty much secures the corner, and leaves the white stones without a base. This exchange is a clear loss for white in my eyes. 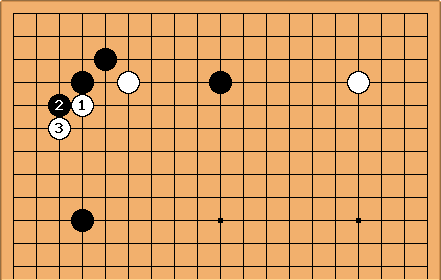 Charles Matthews In a handicap game as White I think I'd try this technique. 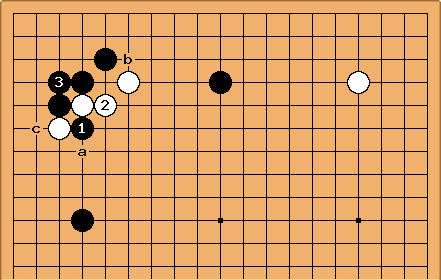 Andrew Walkingshaw: If the ladder at a is broken, is this exchange not reasonably good for Black? The corner's taken solidly on quite a large scale, and there's big yose moves at b and c (the purpose of cutting being to enhance the value of the latter...)

Charles As a comment about handicap play, White accepts this sort of position because there are several possible ideas to follow.

Idea 1. Play a ladder-making move in the lower right. 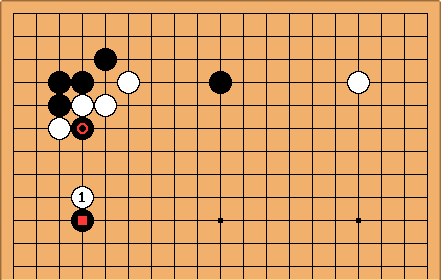 Idea 2. 'Fly off at ninety degrees'. By attaching with White 1 here, White aims at the circle-marked black stone while starting a separate fight in which the square-marked stone will be damaged if White gets in two plays in a row. 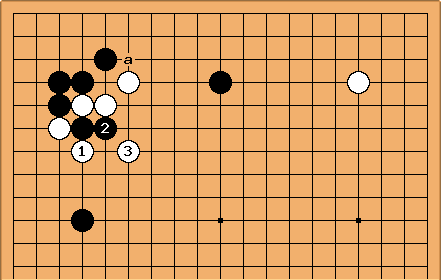 Idea 3. Even with a bad ladder, one can aim for a net, and even if the net doesn't work, one can squeeze. This doesn't yet work well, but if White gets a stone at a it becomes more attractive.

Anyway White's ideas here can be called typical. They show both flexibility and a broader vision, while Black is clinging to corner territory and hoping for the best on the outside.

DaveSigaty: Although everyone's first reaction (including mine) is that we are looking at a relatively normal situation/question, from the pro point of view we are not. If we search GoGoD CD we find that when White plays next in the pattern below... 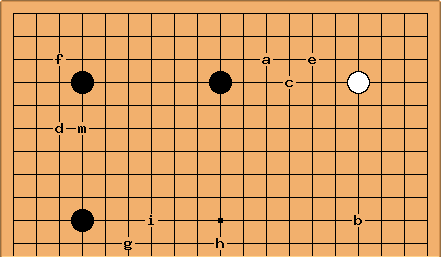 The pros never approach the upper left from the top.[2] It is not a question of the knight's move approach versus the 1-space high approach, they don't approach at all! Here I listed only the top ten continuations but in fact there is no example in the data base of an approach to the corner along the top as the next play within the search area. Rather they play toward the open skirt of Black's top position or take the big point in the open right side. If White approaches the upper left, she does so from the left side. This is presumably the side that offers Black the most potential so it is where White starts her reducing plays.

Charles Matthews Well, let's look at a result. I might evaluate it rather differently. 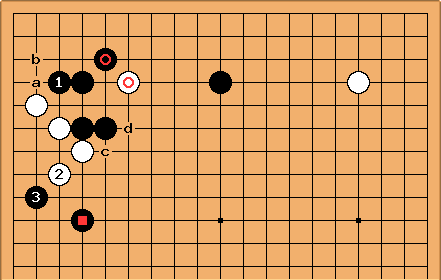 Suppose this happens, with White playing the modest (shibui) 2 stone for eye shape. White has the exchange White a, Black b in the corner in reserve; she prefers not to play it yet, because White at b is big in endgame terms.

So, what has happened here? White is close to being settled on the left, and the square-marked black stone is correspondingly weakened. White has avoided the exchange White c, Black d that would weaken the marked white stone. Black's circle-marked stone - the original black reply - might now look a bit submissive.

Dave: I would tend to agree that the marked Black stone at the top might look submissive, but only if White can do something with the original approach move. It seems to have very little opportunity to develop from here in any logical way (i.e. in any way that threatens Black). If Black continues at 3, can White settle herself without strengthening Black on the left at the same time (of course we do not know the position in the bottom left so it is a little hard to judge)? Even if she can, the upper side stone stil seems to have no meaning. 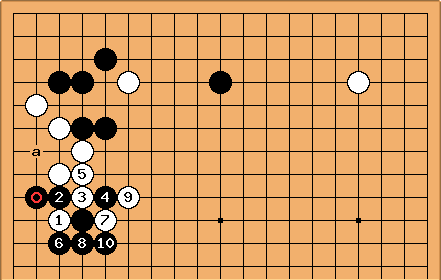 Charles Yes, Black's attack with the footsweep (marked stone) is one obvious try to look at. How worried should White be? Black's really serious attempt to kill would be at a, instead.

White 1 strikes at the waist of the knight's move; and then up to 7 is natural? Black 8 would capture White 1 if Black really believes in the attack. But White 9 is surely good.

Dave: I would add 10 and then be satisfied no matter what White chose. Again it would depend a great deal on who holds the lower left but I think that Black can hardly get into trouble on the left side. Maybe our styles are too different to ever agree here :-)

Charles I rarely play Black in a handicap game, and know much more about White's type of plans (light play, amashi, leave aji, enjoy it if Black gets overconcentrated, use temptation to lead Black into amarigatachi). Of course if Black plays as well as White, no advantage will accrue to White.

I can't see that Black giving White a ponnuki in the centre is bad for White, even if Black gets a new framework lower left. I would then see White as having dealt quite adequately with the upper left, and Black's plays to take the corner as ineffective because Black has played close to the 4-4 point and yet White can still jump in the open skirt.

Charles Matthews I think this kind of remark - which I'd called a 'blocked configuration' - is one of the potentially most interesting products of database search. One can often use it to delineate quite clearly the difference between pro thinking and good amateur ideas. In this case I'm sure many players around my level would feel that the approach on the top side to the upper left star-point stone is likely to cause an running fight; and would find it attractive for that reason.

I repeated Dave's search with a 19x10 window, and found a few examples of the approach from the top; showing the sensitivity of the data.