Lessons in the Fundamentals of Go / Discussion

Dieter: Lessons in the Fundamentals of Go is the best selling Go book in Europe - according to "Het Paard". It is many a player's favourite. So in order to provide some counterweight, I state here and now that, although I like(d) it a lot, I find it heavily overestimated and even disappointing in retrospect. It is possible that I have forgotten what it taught me. "Stank voor dank" as we say in Dutch. Here is my criticism.

In summary, it is a wonderful book, more because of its wit than because of its useful advice. It reminds you there are things which are not explained elsewhere, but neither are they in this book.

HolIgor: Getting ahead is a great fundamental principle. The more I play the more I appreciate it. The difference between a black or white stone in a certain place is usually very large and we have to learn to appreciate it.

Another great principle in the book is a lesson to use influence for fighting and not for territory. This is not an obvious thing: it has to be learned.

RobertJasiek: I disagree; the principle is not great. Influence can be used fighting, for building new influence elsewhere, for making territory or other things. Kageyama should better have said something like "Usually, influence is used for fighting." or "Consider using influence for fighting before using it for [local] territory.".

And I remember one more great piece of advice from Kageyama's book. Don't count your spheres of influence as territory. For example, a small low enclosure is not a territory (yet); and should not be counted as such in the middle of the game. When you learn to apply this rule you won't feel frustrated when you lose it, moreover you will not feel obliged to defend what seems obviously yours. From the psychological point of view the game becomes much easier, you see the board better. When your opponent make a standard second line probe in your small low enclosure, you really do have a choice.

About the ladder. Kageyama's main advice is to learn to read it out. Stone by stone. It is amazing that at the level of IGS 5k* from time to time my opponents make mistakes in reading the ladders.

unkx80: About ladders, um... yes. Have fun with a problem I posted at

http://www.goproblems.com/prob.php3?id=1212, which is a game between two professional 9-Dans.

Scartol: I just finished the book, and enjoyed it immensely. I felt like I was being lectured by an elderly gentleman with a very strict sense of tradition and his own skill. Every time I read a phrase like "Anyone who misses this question has no future with the game," I would immediately get the problem wrong and feel very stupid.

But then I'd remember that practice is the only thing that makes anyone better at anything, and that lots of cranky old men use belittling tactics to get students to think more before trying. I prefer (to hear and to use in my classroom) a more gentle approach, but if nothing else, Kageyama's style made me feel great when I got a problem right (both times).

Ultimately, though, I think the book is very useful for the same reason that teachers like Kageyama are so cranky -- because mid-level students (of all kinds) get very high on their minor successes, lapse into laziness and pride, forget the basics,start to fail, and give up. His insistence on knowing the fundamentals (even when he doesn't explain them very well -- I agree with Dieter on this) really made an impression on me. It's the same thing for reading or basketball or succeeding in business. There are no shortcuts, crawl before you walk, always know what you're doing and why.

Now who knows where I can find a copy of Lessons in the Fundamentals of Not Playing Go on IGS until 5:00 AM Causing One to Avoid Work and Skip Meals and Not Bathe?

wysi: I had an interesting encounter with Kageyama's advice recently. Playing in my first tournament (I'm now 18k but was 20k at the time), I was having a teaching game with a 2 dan player, and we were joined in discussion by a 3 dan player (who won his division with a perfect record). We were discussing various possible fuseki moves when the 3 dan pointed out 'Kageyama says that go is all about connecting and cutting. Given that, what do you think is the best move?' Since then my thinking about the game has changed, and I think a lot about cutting and connecting, and I sense a real improvement in my play.

I guess this is probably a common experience...

MatthewPeters: I share Dieter's criticism, I wish there were more fundamentals to get hold of. However I have the following to say: I have just re-read Chapter 1 for the third time, and first there is a position where you can capture a stone in a ladder or a net and he prefers the net because it is firmer, i.e. the consequences are clearer. Then there is a problem where you capture a stone but you have to read for 20 moves but they're all pretty much forced. And then in the text he stresses the importance of reading, So it seems to me that he is saying; above all you need to read accurately, and why not play moves that branch less and thereby help you read, and that's a fundamental. I think that's quite a subtle point but by the way you don't have to listen to me - I'm a only a 9 kyu on our club ladder. Nonetheless I like this book above all others because his voice sounds through. I was sad when I realised he had died.

Hu-of-KGS: Kageyama's "Lessons in the Fundamentals of Go" is chock full of fundamentals. Here are some from only the first chapter of the book (22 pages).

The first chapter is typical of the others in terms of the fundamentals that can be read and extracted. Many fundamentals are considered by many players to be so simple that they are beneath their high level of consciousness. That is exactly one of Kageyama's main points.

Darak?: Kageyama's book is one of my favorites. Why ? Simply because it is easy to read through and it reminds you of the essentials of go.

I don't expect a book to give me the fundamentals in a long list of dos and don'ts, that would prove of no use since I would not go past the first ten pages. However with Kageyama it is just the contrary, dos and don'ts are written within the text, sometimes in an unclear way I agree, thus forcing you to go through this book at your own pace to get the most of it.

On page 210, he claims he made a boner in the problem since Black can't capture the four top stones if White moves at 2 then Black follows with 3, but what if 3 is at 4? 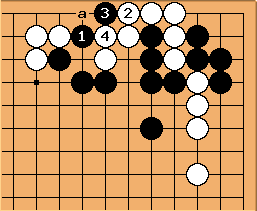 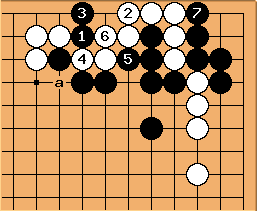 ethanb?: Because white a connects out and captures 1 and 3. 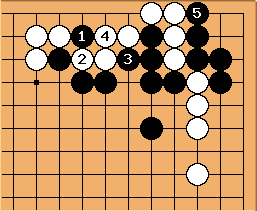 Iron Chef Sakai: Five star customer rating on Amazon.com. Although it is mainly helpful to readers better than 10 kyu, there is something in it for everyone.

Fwiffo: This book is awesome. I recommend it to everyone who a) plays Go, and b) has the capacity to read books. Not only is it an excellent resource for getting stronger at Go (for players of many levels), but it's written in a highly entertaining and compelling style. I find myself thinking about Kageyama's writing even when I'm doing all sorts of things that aren't Go. Heck, it might be a good book even for people who don't play at all.

Gul : This book is great! I love the scolding you receive from Kageyama when you get a problem wrong. I love sentences like:

"If you do not love whites wall, lay this position on the goban each morning after you wake up and chant: white's thickness is superior"

TheBigH : I think it is strange how little attention is given to ko.

RobertJasiek: The book is selective in its presentation of topics; this may explain it. Depending on which readership the author envisioned, there can, however, be also another reason: Nowadays, beginners (i.e., real words double digit kyus in most countries) make only very few systematic important mistakes related to ko; they know the basics of how a ko fight works. I have identified two such kinds of mistakes in beginners' games. When Lessons in the Fundamentals was written, there was another systematic mistake: A fear to play ko fights at all. It is my impression that this fear has almost disappeared. Anyway, including it amounts to only three notworthy kinds of mistakes. Maybe Kageyama was aware of that, had beginners as the intended major readership and so thought that ko would not need an extensive treatment in the book?

Dieter: Really? To me the rare virtue of preferring a ko to a farmer's hat in response to an atari is a sign of a looming dan grade.

tapir: For me, as an almost-dan-player Ko isn't part of the fundamentals but a highly complicated easily misunderstood topic that I often do not understand let alone beginners. And among the many writers about go i see that most clearly avoid the topic or write a lot of complicated stuff that isn't at all useful to actual gameplay. + But how about a page: Lessons in the fundamentals of Ko? :) This would leave more stylistical freedom than our other attempts to produce beginner material about ko.

here. - I agree that too many authors (of books for intermediate / advanced players) avoid the topic.

tapir: As I said: "Complicated stuff that isn't at all useful to actual gameplay."

lokori?: Do not underestimate this book! It's value is not in the advice and tips per se, but rather on the meta level. The book tells you how you should study go to become really strong, which is extremely valuable and fundamental.

One of the best parts is explaining common traits of gurus, attitude and the learning methods that apply to any skill or craft. The way in which a master level football player, pianist, programmer or go player approach their art is fundamentally the same. They all know thoroughly and deeply the fundamentals and yet they continue to practice them every week. And the practice is deliberate, result-oriented and focused.

Kageyama explains through his examples that this way of working is the only way to reach mastery. And he says it takes a lot of work. And then there are practical exercises for the reader to get started.

There is a tremendous amount of psychological research to back up his thoughts though Kageyama does no refer to it and perhaps didn't even know about it. But psychology has pretty much verified in the scientific sense that he is spot on with his thoughts.

This deep theme is what makes the book great and timeless. Not the "tips and tricks" about any particular joseki or situation.