The Problem of the Upper Right 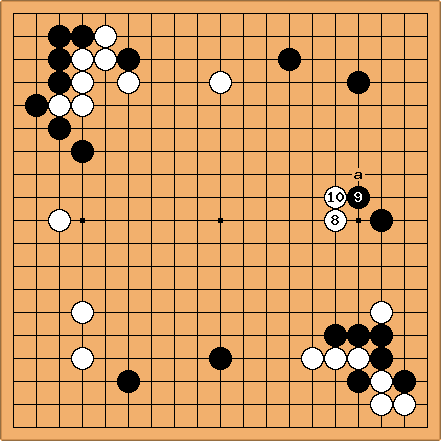 Bill Spight: Black 9 looks inefficient. Better keima at a or tsuke at 10.

AndreEngels: White 10 is likely to strengthen Black here, but White does not mind because she can still invade the corner. 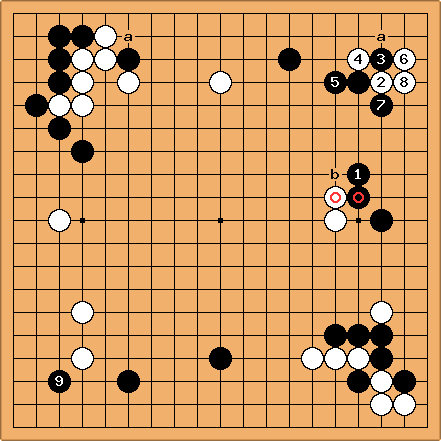 Bill Spight: Black 1 is inconsistent. Right or wrong, play hane at b. Suppose that Black had played the keima at 1 to start with. Then the exchange of the marked stones would favor White.

DaveSigaty: Black answers 4 calmly at 5. If White has to struggle for life on the edge there is the danger that her two stones in the middle of the right side will come under attack. Once White had exchanged 40 for 41 should 42 (2 in this diagram) have been at 3?

Meanwhile as Black's upper right stones become stronger the threat of starting something on the upper side with a grows.

MortenPahle: I asked myself a similar question: after White has exchanged territory for center influence with 40/41, it seems like a change of heart to go for a 'difficult' invasion with 42, giving Black outside power for some territory. I cannot see the benefit of 42 over 43. I suppose this is why rengo is fun! You never know why certain moves are played :-) Maybe the authors of moves 42 and 44 could enlighten me?

I added 6, 7 (which were shown above but not in the numbered diagram). I believe 8 for White is best as he can capture Black if Black plays a and avoid the ko with Black playing at 8. --Jonathan Cano

Variation: pulling out Black 43 with 47

The change in numbering in "A possibility for Black. White has problems with life" confused me the first time I looked at it.

For the benefit of others, here is the same variation with numbering that matches the game numbers: --Jonathan Cano 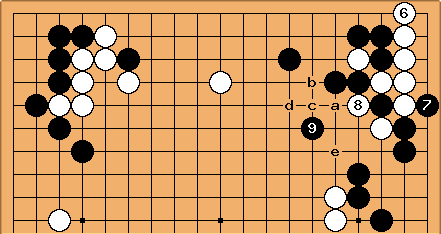 continuing the variation above...

DaveSigaty: Pulling out the black stone in the corner is the better approach. In the game Black 47 (7 in the main diagram) is too close to 1. Black should be aiming to use 1 to attack White as shown in the analysis above. There are no obvious alternatives for White that avoid trouble. However, after 9 in the last diagram note that White can play e to escape into the center with the help of the two white stones played earlier. Black can cut off the two stones and White's upper side is thin so there may be the opportunity for a splitting attack. 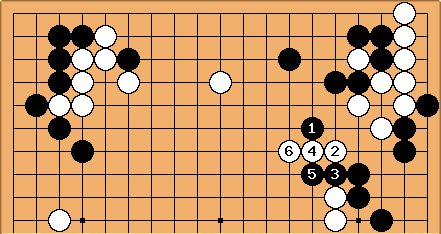