Here is a position to discuss 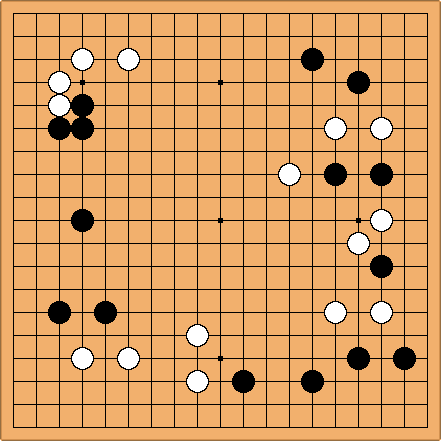 If this helps you may look at the final position of the game: Move31game1Final

JoanPonsISemelis: If there's a clear relationship between a position and the end of the game, then only yose moves have been played in between.

Let's have a look at the current position and try to determine secure territories, moyos, influence, strong and weak groups. 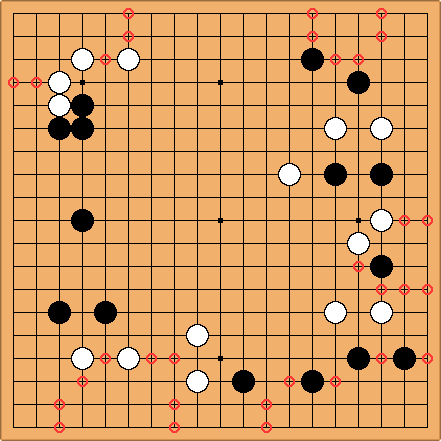 The territory boundaries are marked with a circle.

JoanPonsISemelis: I completely disagree about counting 7 points for White on the right side and not even one for Black at the left. Right now, the right side is more under dispute than the left.

That means if he can make 15 points on the left side (where he has this large framework, which is not 100% secure territory yet) he is even. 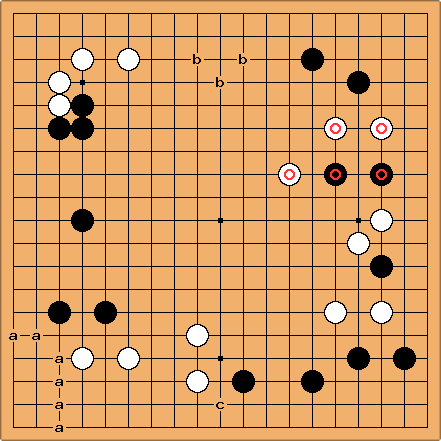 Having a look at the strong and weak groups and room for expansion, we can identify the following groups and areas:

Room for expansion is primarily the area at a. Playing here is very large for both sides. Note that there are follow-up plays as well, which threaten the territory and moyos of each side.

Plays around b are big as well, but not as urgent. Both sides have stones on the third line, so this area is secure for the time being, a play there being a gote play for whoever plays there.

Finally, the double sente play at c. Which again threatens the territories of both sides.

DaveSigaty: I agree the area around a is both big and urgent. We should also take into consideration its relationship with c. After White plays first in the a area, c becomes a normal double sente move threatening both territories equally. If Black plays first in the lower left, a Black play at c begins to threaten White's eye space. This is part of the urgency in this area.

Bill Spight: AARRGGHH! If c were really double sente, it should have been played a long time ago. Right?

Dave: Welllll... maybe! I do think that it is convenient to think of c as a double sente play but of course all claims to sente depend on the size of the alternatives available. Move31Game2 certainly has some rather breath-taking tenukis that illustrate this, no? :-)

So where does this leave us?

As it is Black's turn to play he could sacrifice his weak stones on the right (giving White an extra 15 points) expanding his corner territory in the process (maybe by 8 points). White would gain about 8 points in the process, but Black keeps sente.

Then Black should immediately play in the area around a expanding his moyo (and turning part of it into secure territory), while denying White the possibility to expand her bottom territory.

The question is of course: what's more urgent? Defending the weak stones, or expanding along the border of two moyos?

Bill: I was curious about the results, which were something of a surprise. ;-) However, it did bolster my belief that the right side is urgent. Where to play is another question! ;-) Difficult. 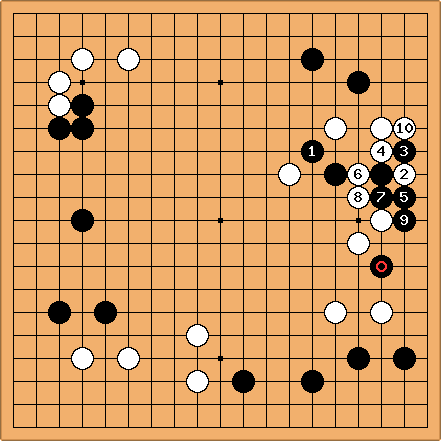 DaveSigaty: I also think the right side is urgent. Black would like to cut off the two top stones but can not do so immediately. After 2, White connects whether Black continues at 3 or 5. Black can connect to the marked stone but his top right corner is exposed and his initial play at 1 has been wasted. 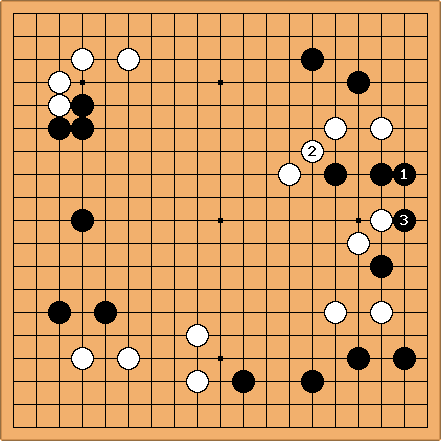 How about this 1? Strategically the goal is to block White's connection, aiming to cut through at 2. At the same time, it threatens to connect underneath to the marked stone. I think that White pretty much has to answer around 2 so Black gets to play 3. How should White respond?

Bill: I also thought about pushing through with Black 1 (next). 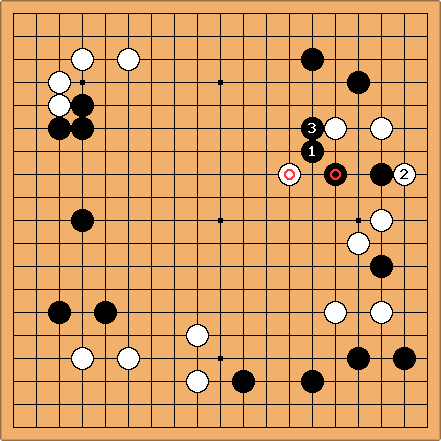 If White 2 connects, then Black 3, I think. :-) Capturing White 2, as above, is premature. As Dave points out, it weakens the marked black stone and Black 1.
White 2 is inconsistent with the attacking stone (marked). I think that Black can be satisfied to consider it as kikasare and play thickly. After Black 3 the marked white stone needs shoring up.

Dave: I think this is much better than my line above. The way of thinking about the marked stones in definitely worth trying to apply to one's own games. White still has not stabilized the right side. Meanwhile White's weakness in the center will make it difficult for her to try something on the left side.

After Black 1, a possibility is that White will lean on Black's corner group. 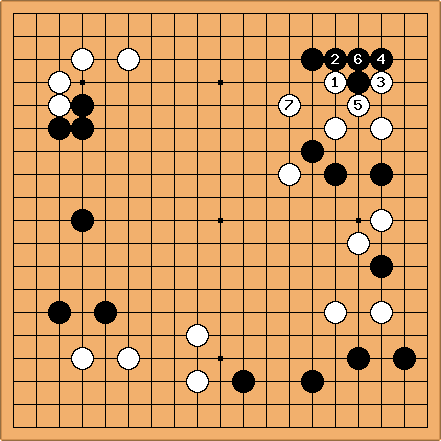 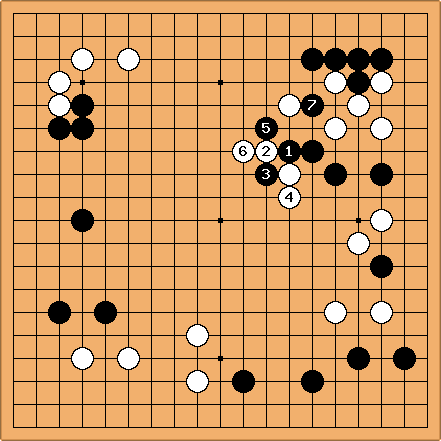 But Black still comes out OK, it seems. 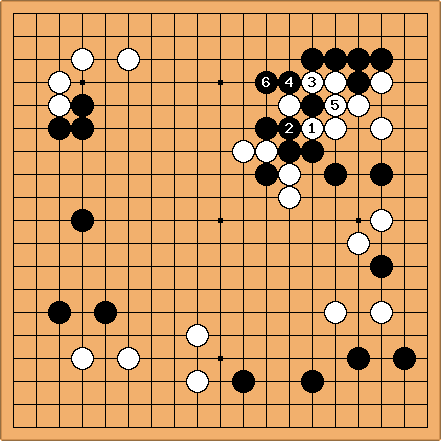 This is plainly bad for White. So, backing up: 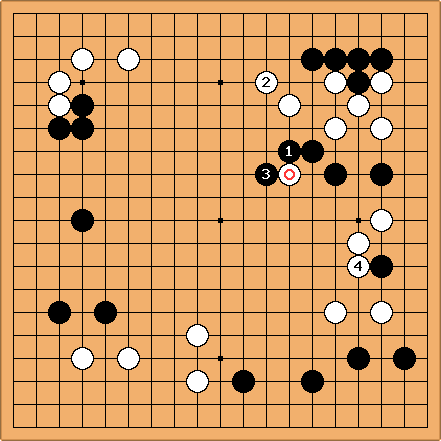 White 2 escapes at the expense of the marked stone. After Black 3 maybe White needs to protect with White 4. 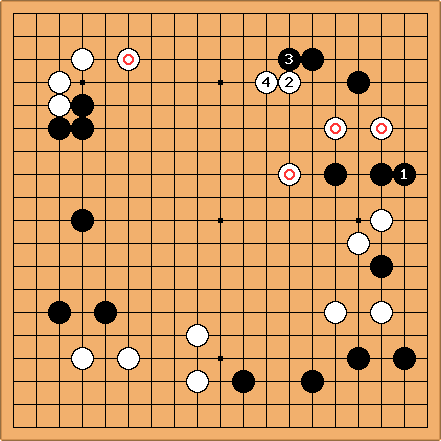 Black 1 is interesting. :-) But now, as White, I think I would shift to the shoulder blow of White 2, hoping that in the subsequent fight on the right I can make Black 1 inefficient. White 2 and 4 work with the marked white stones.