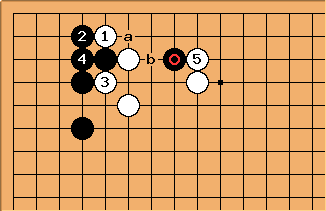 Does White gain anything in compensation? It seems not. Black can play a and White will have to protect at b eventually. 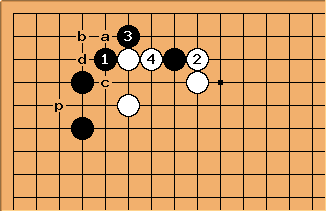 This is the usual joseki. (See 44PointOneSpaceLowPincerOnePointJump).

, the corner seems protected now. By not exchanging a for b and c for d before

(as in the previous diagram), does White leave some aji in the corner? What, exactly is the aji? Can White live or create a ko directly? Or is some additional preparation needed?

Charles I'd say that White's giving up the chance to peep at p here was quite serious as a loss. 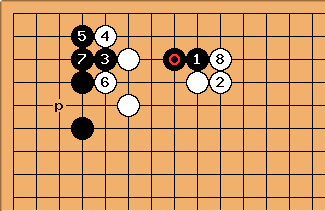 I've also seen this sequence in books, though I may be confusing it with a similar 3-4 point pattern.

In any case, the push at

followed by the attachment at

is bad for black as the

stone becomes a wasted move. But, is the exchange of 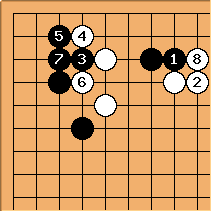 This sequence is discussed in Ishida's Joseki Dictionary. Again, the push at

If Black wishes to play

, he should do so immediately. Permitting

is a loss for Black. When this sequence is discussed, however, the exchange of

is considered good for White. Why? Was there no significant corner aji anyway?

Charles Here, Black is simply inconsistent and ends up having made a bad exchange

SnotNose So the sequence in either Fig. 3 or Fig. 4 is okay for white? Or, is white still better off not helping black secure the corner and leaving the aji of p in Fig. 3? That is... 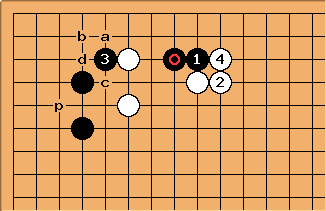 In Fig. 5, Black plays inconsistently with

. White does not make the a/b and c/d exchanges so as to leave the aji of the peep of p for later. Note the difference between Fig. 5 and Fig 4. When the joseki is played out from a 3-4 point beginning, White plays differently. 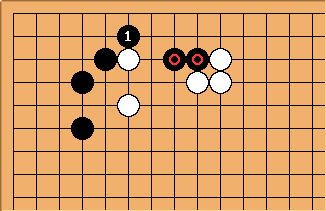 is a connection to the

stones (with only a slight amount of aji remaining for White), I don't think White should permit it.

Trying not to lie with tewari, I do think Black has made a mistake here (Fig.3), and White need not regard any aji keshi to take advantage with regret.

SnotNose I have noticed that there is a lot of confusion about the correct order of play in these types of joseki, which one might lump together under the general title 34Or44LowApproachOnceSpaceLowPincerJumpPress? or some such. 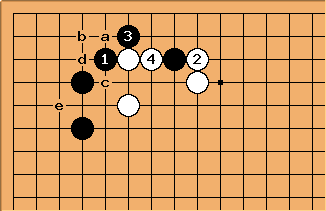 came in a club game, wand we discussed this variation. If White replies at

instead, she becomes heavy and the cut is bothersome. However, we found it difficult to evaluate this position. 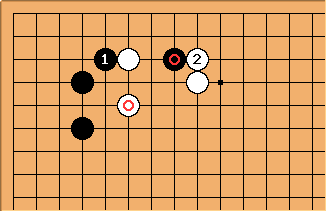 If we analyse it from a global point of view, we could argue that

declared the top to be important. Hence, the 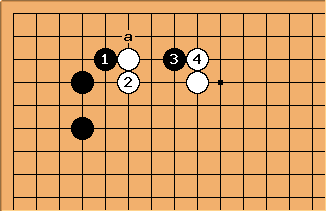 If we compare to this variation, where

prevents the connection underneath at a. 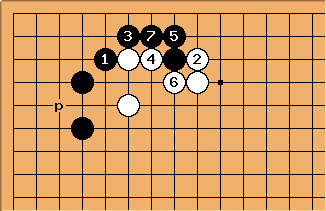 I was wary of

. I guess White can avoid all trouble and play

. Black is now very low, White has sente and influence towards top side and centre.

Still, one could regard Black's corner as big. That's the point I'd want to investigate further : how invasion-prone is the corner ? What's the value of the peep at p ? 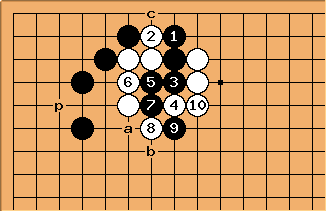