I (anonymous) have just started playing Go for about a couple months and one of the mistakes I was making early on and didn't find out till later was I was playing too thick. After making the correction I noticed that almost all beginners were doing this so I thought I would post about it here.

Bill Spight: Hmmm. And here I thought beginners did not play thickly enough. :-)

20+k loser: Agreed, Bill, my problem is that I play too loose, nearly throwing the stones down and hoping they land somewhere nice.

Alex Weldon: So perhaps the page title is correct, and only the content is wrong. ;-) Maybe the biggest problem for beginners is telling the difference between thickness and overconcentration.

Bob McGuigan: I think thickness is a difficult topic for players at any level. I recall that Kobayashi Koichi used to be criticized for making moves which top pro commentators thought were slow but which Kobayashi thought were thick.

The reason for this is simple: beginners read that they should stay connected and that thickness means strength and influence. Which of course sounds great. So they start out in the corners like they were told maybe, or even at the edges too. But after that they just link stones right up next to each other building their walls right away. They're afraid to spread out because they've learned that separated stones are easily attacked and captured. And who doesn't want strength?

One of the first things I learned as a beginner was if I wanted to have any territory I would have to play looser and take chances. 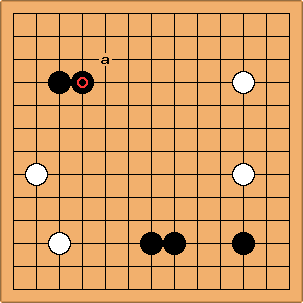 Bill: This is not really what thickness means. Black is overconcentrated. And the top left corner is not so bad. A stone at a would be better than the marked stone. I made the same kind of mistake when I started out. :-)

Another Go player also mentioned to me that what I was referring to was overconcentration. Oh well thanks for correcting me. I will leave it as it is for now, unless someone else wants to take the time to go and change all the words "thick" to "over-concentration". Thanks for fixing my page Bill or whoever it was. (Whoever I am) I knew it didn't look right.

Kris Rhodes: Would this be better referred to as playing "too heavy"? Or is that something else?

Bill: Heaviness is a form of overconcentration, but it involves weakness and lack of flexibility. I wouldn't call Black's stones heavy, here. :-)

| kb: I have to disagree with you here, Bill. Being heavy doesn't imply that there are too many stones in one area, it just implies that they're not very flexible or that they're a burden. Overconcentration just means that strength is overlapping, usually because there are too many strong stones in one area. I'd find it very hard to call an invading group my opponent made heavy overconcentrated, especially if the invasion region is the right direction of play. Heavy, light, thick, thin, and overconcentrated are very hard words to define and differentiate (on paper)!

Bill: Oh, I do think that heaviness implies too many stones in an area. If you have too few stones you may be thin. And if you have just the right number of stones, . . . ;)

argybarg: Couldn't we also say that these moves are small? The real fault here might be in mis-measuring the value of moves against the opportunity in the whole board. This is something that beginners (understandably) struggle with.

A few other mistakes I see from TRUE beginners are:

Karl Knechtel: Disturbingly, I see these mistakes, or similar ones, from players at my ("kyu-counted-on-one-hand") level too. Well, the first two anyway.

Rich: I sometimes get the second symptom at the end of tournaments, when I have played too much. It's when I know it's time to take a rest. :P

Andy Pierce: I think this is part of falling in love with your stones. If you try to save every stone you put on the board you wind up either overconcentrated or, even worse, heavy. Mentally, beginners justify this kind of play as thick when it's not. Remember that thickness needs to be useful, where useful does not simply mean "doesn't get killed". Make your stones work for you. This includes working to force your opponent to kill them so that your other stones can benefit even more. My $0.02 anyway.

Erikpan: - Ok then, here's a question from a mid-level beginner: I don't play too closely myself, i tend to strike out into the board quite a lot, but I find myself playing a lot of people who do play too closely, and I seem obliged to spend ages playing battles i know to be winnable by me but that seem to need to be answered stone after stone until it's painful; especially when it's near the edge and i risk losing a corner by not answering. It generally leads to lots of snatched moves elsewhere in the board from which I win later but at the time i can't help but feel there's better strategies for play than that. What am i doing wrong? How do i avoid getting sucked into a long, drawn out and foregone battle like that? Any ideas welcome :)

Calvin: If you are winning these games, it would be hard to recommend a better strategy. Play stronger opponents and this will become less of a problem. :-)

unkx80: A teacher told me many years ago used this example. He said that the Black group is extremely thick and can never be attacked at all, but Black has only two points for all this thickness.

Dieter: Clearly in the teachers' world there is no consensus. My teacher Minue, when asked if a group's thickness means strength of group said it doesn't, and when consequently asked if it involved influence said it did, but there was more to it. Then he also told me it is definitely not the same as solid and went on to show examples of thickness which we all know, such as full triangles with extra legs, or mouth shapes, facing the centre.

I gave up some time ago to fully understand what oriental players and teachers (please don't take this badly) mean when they use the term. For my own conceptual understanding of the game I suffice with locally strong groups (an attempt to cover atsumi), global lack of defects (an attempt to cover atsusa) and plays leading to them, and influence. Which is also why I avoid using the term thick(ness) in any of my current writings or game reviews.

unkx80: No problems. =) I don't think I really understood these terms myself too, at least not in the English speaking world.