Alex Weldon: I was playing the Manchurian Fuseki on IGS, as I usually do with Black, but instead of playing under my 5-4 stone, White jumped into my moyo on the other side. I wasn't quite sure how to answer, since there are (AFAIK) no joseki for a 7-3 approach to a 5-4 stone. 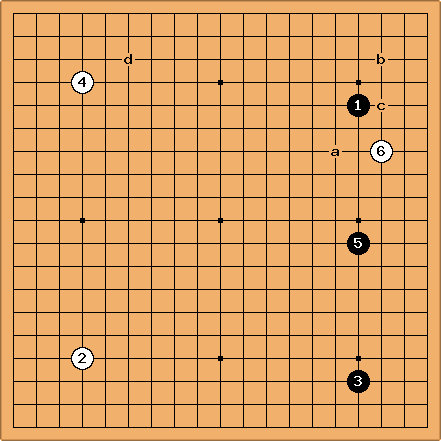 This move doesn't seem particularly good to me. It's a moyo invasion, but it seems too early, and one is generally supposed to play at the 3-4 point under a 5-4 stone. If he wanted to invade so soon, surely he should have played at the point of symmetry one line lower.

However, I wasn't quite sure what the best thing to do was. The moves I considered were a, b and c. The thinking was as follows:

Anyway, this is a classic case of "opponent plays a move that is probably bad, but it's weird enough that you're not quite sure what to do about it." What would you do? 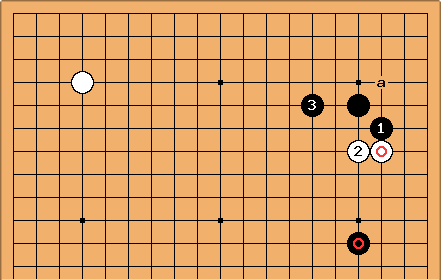 Charles Matthews This diagonal attachment Black 1 really ought to be the first pattern to consider. One can't conclude it's necessarily correct, because of the remaining aji at a. But what it does is to make the marked black stone into an attacking stone immediately: it's consistent. 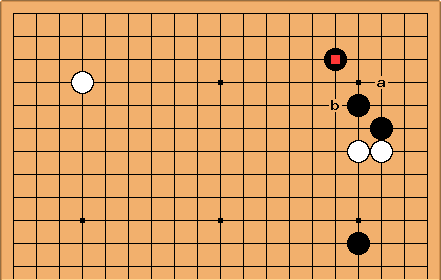 From the point of view of taking the corner, and nothing else, playing the square-marked black stone would be better. That would make it much easier to kill the invasion at a or the 3-3 point. This is a kind of good-shape play, therefore. But now White at b is pretty much kikashi for White, and Black's attack on the outside is not going to be anything like as strong.

This way of playing goes back to Shusaku - of course that doesn't mean it's best here.

Bill: One thing to keep in mind, whether faced with an unusual situation or not, is how well your proposed play cooperates with the stones you have already played. If a play would make one or more of your current stones misplaced, that's a strike against it. In the opening in particular, it's almost the kiss of death. (An exception is a kikashi that leaves the opponent with a misplaced stone or stones, as well.) 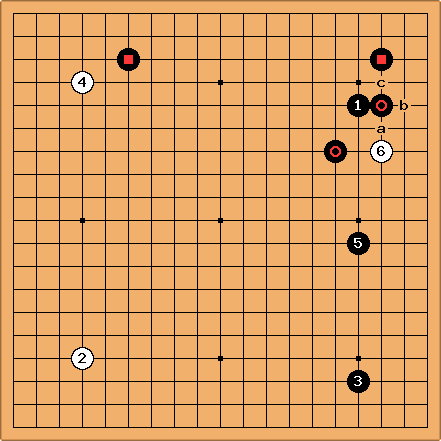 If you already had one of the

stones on the board, and White played

, would you respond with

? No. Therefore, these plays are dubious, the 3-3 particularly so. Any tenuki is questionable, here.
OTOH, if you already had one of the

stones on the board,

would be a reasonable reply to

, and the other Black stones look OK, too. B a (as Charles points out) and B b are possible, too, but leave a weakness at c.
I like the iron pillar (c in your diagram). It makes territory while attacking. (Well, not quite territory, but close enough. ;-))
Also: 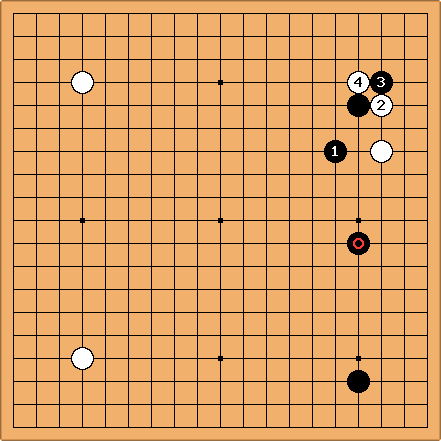 If Black plays the cap at

, White may attach and crosscut with

. The fact that the corner is so large makes this difficult for Black. It is hard to trade the corner for the side.
If Black plays at 4 instead of 3, White plays at 3, and

Alex Weldon: Thanks to both of you for the help. Bill's comment in particular about imagining reversing the order of moves is something that I'm aware of, but almost always forget to apply in the context of a game. I suspect that trying to remember to think about such things will improve my game significantly.

rubilia: I am far less confident about go than Bill, but, from a logical point of view, I´d like to remark that the "reverse-best" move doesn´t HAVE TO be the best move in the actual game. (However, in many cases probably it is).