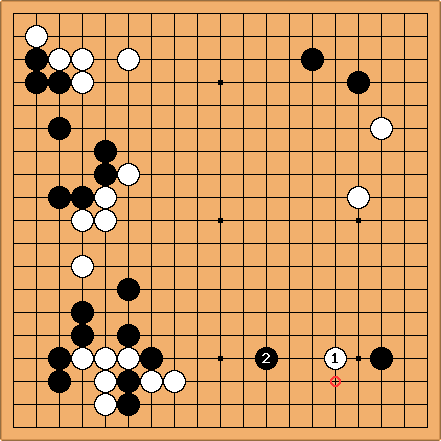 Stefan: White 1 is move 40 in a game in which I held the black stones. I was looking for something slightly better than the inside attachment at the marked point. I reckoned that after the usual continuation, White would have sente to develop a nice position on the lower side or play tenuki. At the same time, he has played ladder breakers for the cut in his position in the middle on the left, which may not be so weak but it's floating. I played 2, in order to break the same ladder, limit whatever White could get at the bottom, take a piece of the corner and preferably a piece of the right side as well. The first question is: can Sensei comment on the soundness of this plan? 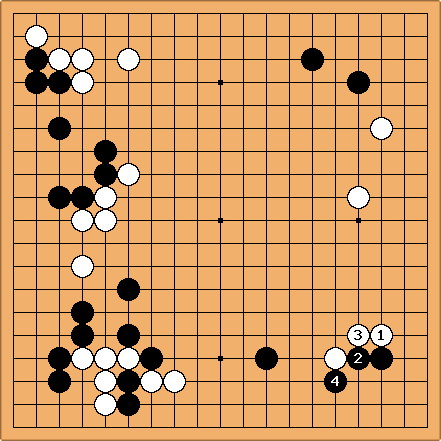 White was careful about his response and played the outside attachment, a move I hadn't really considered in my analysis. I rejected the usual continuation, because I expected it to revert to the situation I wanted to avoid (i.e. White ending with sente to play a good developing move on the lower side, which also protects the cut from a distance and threatens to swallow up my pincer).

I know the continuation shown - bluntly butting into the stone with 2 - can't be joseki, but it was the best I could come up with. Would Sensei have done anything different? 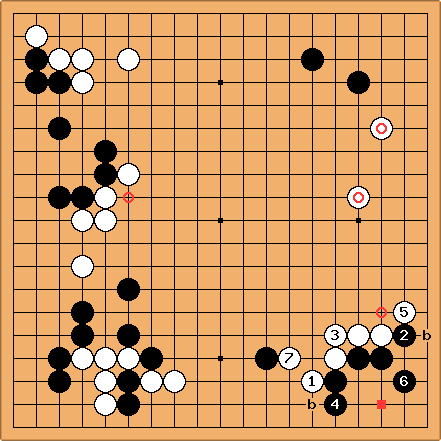 This is how the sequence ended. I felt this was OK, since I had the corner and the aji of the two marked cuts to work with. Does Sensei agrees this is an acceptable result from a local and a global point of view?

Hmmm, I wouldn't feel OK with White. I think that the sequence in the game is terrible for Black and certainly not better than the normal joseki. In your sequence, the wall White builds is working very well with the two marked stones on the left side and your pincer stone is wasted. As to the cut at the marked point, I don't think it is very important since White can easily sacrifice one stone. In the normal joseki, if Black plays at a next, he has almost as much territory as in your variation and the two marked stones certainly won't make a lot of territory. There might be other possibilities for White, but if I had to choose between the two diagrams with Black, I wouldn't hesitate a second!

P.S. In your sequence, if White plays at the b points (I suppose you connect when White plays atari), I think that the aji at the marked point in the corner is bad. 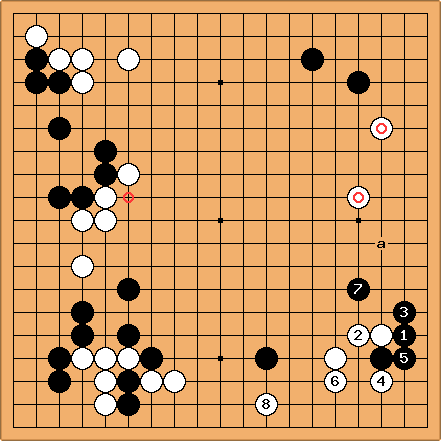 The move that I don't quite understand is Black 2 in "So how am I doing". Once you start with the invitation for the hane on the head, consistency forces you to play the brutal moves in the following diagram. Next Black will attack the four white stones. 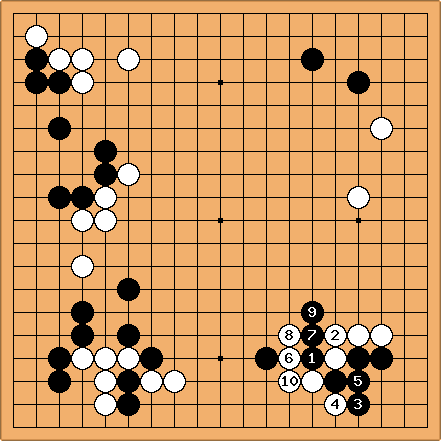 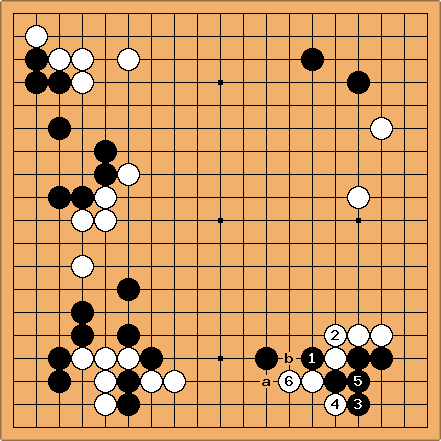 Alain: I must confess that I just looked at the result of Stefan's variation and I agree with Dieter that Stefan's move at 2 in "So how am I doing" is a bit strange. But I wouldn't want to play the ataris at 6 and 8 in Dieter's variation without being forced to (if Black blocks at a).

I think that if Black plays b next, White can handle the fight and play at a.

--Stefan: But even in these variations, technically better than the nonsense I played, are still not good for Black, right? I mean, the overriding element is still that White's wall on the right side works too well with his stones at the top, no?

--Dieter: I think the main issue in this game is not whether the White position resulting from the lower right corner exchange will work well or not with his stones at the top right or at the bottom. The focus in this game to me seems to be the White group on the left. I think White's kakari is somewhat premature. His group is far from stable and quite heavy in the sense that the gains made by Black capturing it are big.