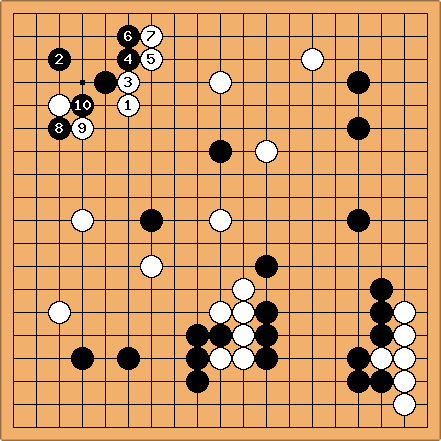 Dave For now let's start at White 41. Where to play Black 40 is a separate but also very interesting question. 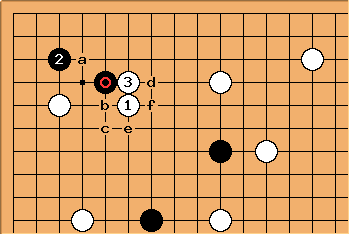 What is White trying to do with 41?

The joseki that we see most commonly, when Black plays

against the 3-5 point, starts with a.

In this case that would allow Black to play towards the two stones inside White's framework, most likely connecting to them and living in the middle of White's largest prospective area. Compared to this, the ten or so points that White can seize in the corner is of no interest at all.

When I play at

instead, I have decided to try to keep

separated from the other two and I am willing to give up the corner to do so. Playing b instead of

is a joseki move for when White values the left side strongly. However, I thought that if Black simply answered with the hane at

, it would be difficult to prevent him from making some kind of shape with the center stones.

In reply to 41, Black 42 was probably too quick to move into the corner. Black is co-operating with White's idea. Black should first think about resisting White's plan. The obvious choices would first of all be pushing at either one of 43 or b:

As soon as that happens, a black play at 42 to secure his stones also becomes a threat to capture White's original 3-5 point stone. This would make 42 nearly sente - White might decide to ignore it but if so Black may end up with a very large corner. (See the next diagram.) 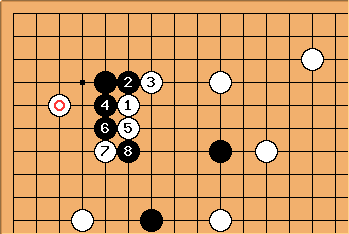 here, what can White do?

. The two black stones in the center are well placed to lend support and White has weaknesses everywhere.

, Black will push again at

immediately. This still threatens to play Hane at the head of three stones stones. At the same time it threatens to play into the corner, nearly forcing White to save the marked stone on the side. By now White's center is too small for White to expect to overcome the komi. 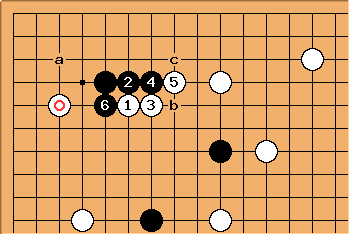 . Now what if Black pushes again? Each push expands the size of the corner if/when Black decides to secure it with a play at a. Can White play into the corner first in order to cut away Black's base? It does not look like it, right now. If Black plays hane at b after White a, what can White do next?

If White plays hane at

. Not only does this threaten to break into White's franework, but it weakens White's cutting point at b. Meanwhile, Black still has the hane at c and the slide to a as defensive resources. White should be more worried than Black. 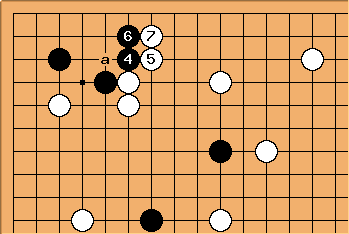 I think that playing 44 is natural here as is White's answer at 45. As mentioned in the game notes, I think that 46 could be better.

White 47 is an all-out move that expects to handle the various cutting points by fighting. The weakness at a in Black's position is an important point when White plans to keep Black confined in the corner. 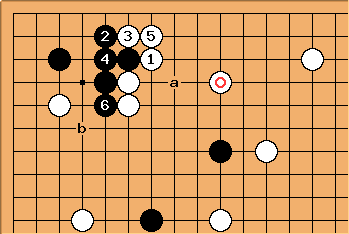 Playing the hanging connection at

more or less forces White to answer at

in order to enclose the top at

, Black would immediately play the huge move at

White could not resist, so Black could expand the corner in sente, reducing White's center at the same time. This would give an easy game for Black.

If White connects at

(a connection at a, often seen in this kind of shape in games, is overconcentrated taking into account

in this case), White can consider whether to push through at 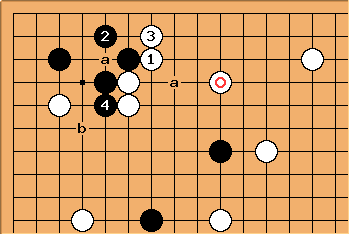 If White simply descends toward the edge with

protects the cutting point at a. This limits White's potential in the corner and makes it more difficult to resist something like 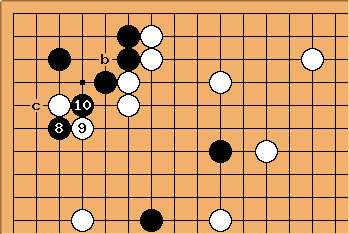 I was really surprised by 48. I thought it was a great idea!

Black would much prefer to break out into the center, rather than live safely in the corner. It is not immediately obvious how (even whether) White can prevent this after 48 without allowing Black to build an unexpectedly large corner. Worse yet, Black might now live on a respectable scale in the corner in sente. This would be a disaster for White.

I played 49 hoping that Black would cut at 50, which I planned to handle using the aji of b. But I did not know how I would handle Black c which seems like the consistent follow up to 48. 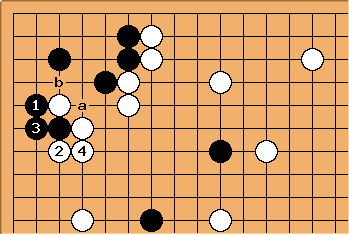 to keep Black confined in the corner. However, when Black calmly connects White has no good move next.

, Black can safely leave the corner and play in the center, either to escape with his stones there, or to establish a boundary that does not leave White with enough potential territory to win. If White connects at a instead of

, I think that Black can quietly play at b. This secures at least 10 points in the corner and the aji of a cut at

remains, together with the open skirt on the left. 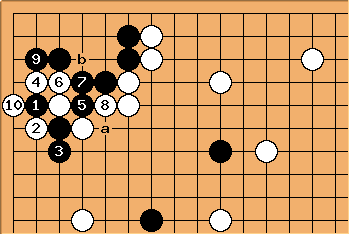 If White tries the violent approach of

creates a dilemma for White. Black threatens to capture one white stone in a ladder with a.

If White plays around

not only stops the ladder capture with a but also threatens to capture some black stones with b) to prevent this, Black plays

and continues as shown in the next diagram... 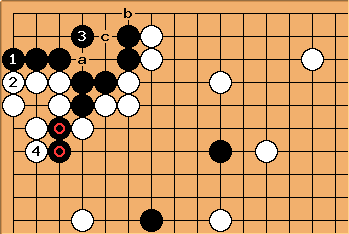 threatens to play atari at

and capture White - so White has no time to cut at a.

stops the cut and threatens to play

, Black can play in the center. White can exchange b for c but this still leaves Black with eight or nine points in the corner. The

stones still have useful aji: for center fighting or for making ko threats. 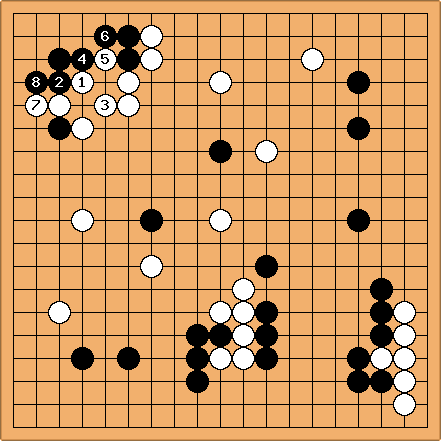 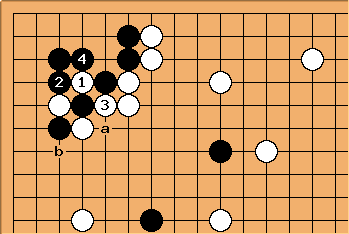 White 51 is an attempt to close off the side in sente. If Black connected at

, I planned to play atari at a and then a second atari at b. White is left with cutting points that will make the later fighting tough, though.

As in the previous analysis Black 52 should probably have been at 57 to connect underneath. 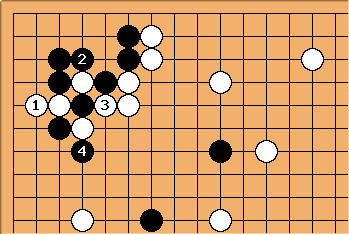 White 53 could have been at

here. This ko is very big but the corner is only worth about 30 points.

If Black erases White's center in exchange for the corner, probably he will still be ahead - especially if he also threatens White's stones in the lower center. At the same time, White has no good external (non-local) ko threats. I wasn't confident that this would turn out well for me.

Instead I offered Black a chance to travel down the wrong path. Black's play with 52 and 54 showed too much concern with the corner. 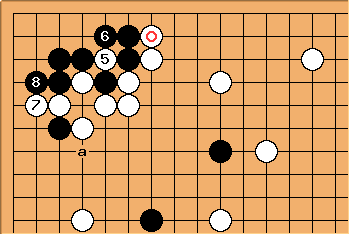 Similarly the correct play for Black was 56 at 57. With 56, Black saves two stones that have already been shut in the corner when White played

. If Black played 57 instead, White 56 would be far too small. Imagine Black played a in answer to White at 56, there is no way that White could win the ko (White has no ko threats) so Black has successfully broken out on the side. 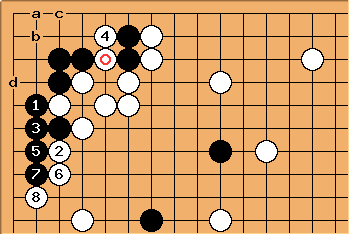 Instead, when Black plays

, White will answer with

it looks like Black can play tenuki with a move in the center. If later White slides in to a, the combination of b and d is left for Black. Therefore White has nothing better than to block at

. Black can play tenuki immediately and live in the corner, if White plays