A pincer leads to an early battle 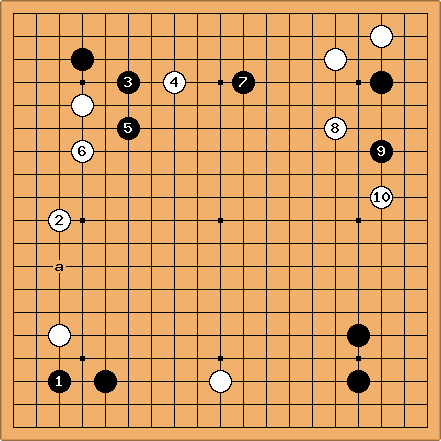 Dieter I'll try to stick with the white side this game (must be my feminine side #:-7). Black splitting White's stones on the left would be too severe, therefore White 12. I feel we have miai extensions at the lower side. Katatsuki in the upper right corner would still be a good move for us.

HolIgor, comment on White 12: this move contradicts my present theory of preparation for the opponent's invasion. The theory registered in ControversialStatements claims that the edges of the invasion area should be thick. I'd play at a. White 12 makes everything thin, helps both groups but does not co-operate well with either. In the future, Black's invasion at a will make something in White's camp weak. Of course, this is a controversial statement, but I want a discussion on that topic.

HolIgor 14: Since White is thin on the left I want Black to force another white move there.

HolIgor 16: Welcome. White defends and looks forward to converting the top and right into no-man's-land. White has a reason to worry though. At moves 2, 4 and 6 White had chance to make a first move at least in one corner but has chosen otherwise. Up to White 10 all white moves were low, too. I think Black is ahead now. 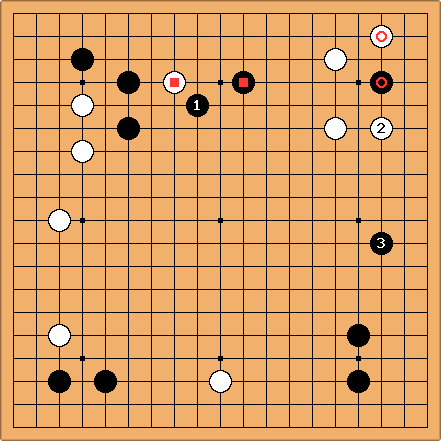 Since the circled white stone is kikasare, Black should regard the circled black stone lightly. Shouldn't Black press an attack against the squared white stone, say with Black 1? If instead White runs with it, Black's squared stone is weakened.

If White later encloses Black's circled stone with White 2, Black 3 is a good play. Black still has aji in the top right corner.

HolIgor: Any suggestions how White could use White 6?

But if Black extends further along the right side, Black 1 becomes less important, and White 6 correspondingly less effective.
The following would be premature, but is one thought. 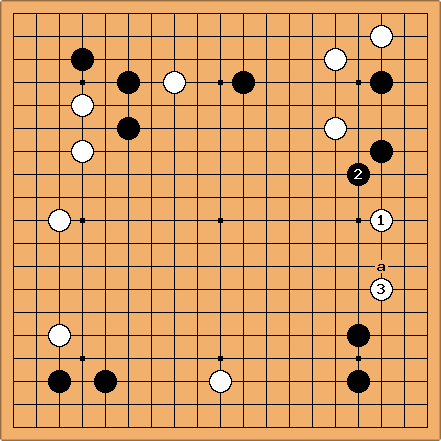 Another idea is to play at 2 right away. 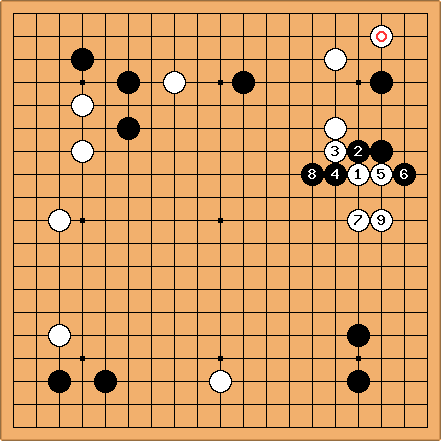 The marked white stone allows White to play at 9. This is a difficult fight. At first, I thought that it favored White, but now it seems about even to me. However, even this is an improvement for White! :-) (White should not try too hard to hang onto the marked stone, and may even sacrifice both stones in the top right for thickness.)

And this attack is still a bit premature, I think. :-)

HolIgor 20: By attacking the black group, White will try to reduce the right side and become thick in the center? Is the task unrealistic? 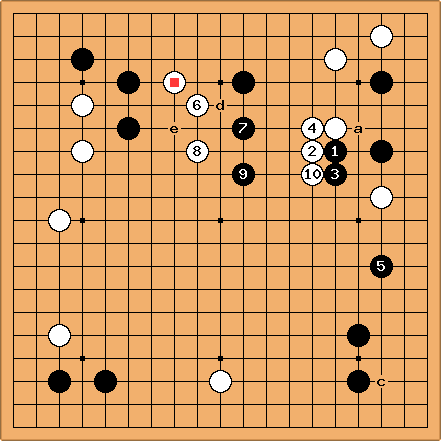 Alain : Black 21 : I think that White wants too much with 20. Black should not allow White to surround him.

HolIgor 22: It seems that you are right. My fuseki is bad again. White 22 aims at some influence in the center. I think that White should at least separate the black groups.

HolIgor 26: It seems that I waited long enough for somebody else to make a move. A white play at a seems to take a good shape point but at the same time it is such ajikeshi. Other options were 7 or c.

BillSpight: White 26 looks heavy. It makes it hard to throw the marked stone away. Another option was d.

HolIgor 26: I thought about d. It is not thick enough. It allows the black groups to connect on top.

HolIgor: No, it does not. I misread and chose a less effective move.

HolIgor 28: I think that White's task now is to keep the black stones separated.

Bill: I am wondering about the point of White 20 - White 26 (forget the question of overplay), as opposed to a simple one-space jump to e.

HolIgor: e did not even occur to me.

Bill: In general it pays to be consistent. If White's aim was to keep Black's stones separated, building up thickness was not necessary. Having built up thickness (at some cost), White needs to utilize it. If it was the wrong plan, let the opponent prove it wrong. My inclination is to play White 26 at d, to make use of the thickness on the right. Right or wrong, the die is cast. 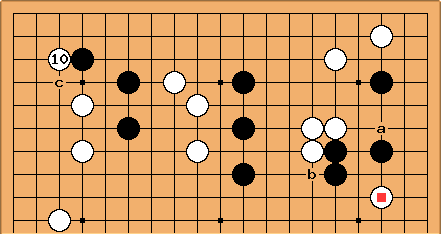 Dieter 1k : I first thought of playing 30 here. Although b connects all the black stones, I felt that playing b for White is kind of slack. Moreover, there is some aji in the marked stone, which makes White a in the very near future an interesting point. Playing b destroys that aji.

Also, the white group in the center is weak, but simply running out seems slack too. White 30 deprives the black group of a corner base, and thus strengthens the top white group - although tsuke strengthens the opponent. But, if Black strengthens himself first in sente, and then connects at b, White is probably badly off. In any case, Black c seems very big, in every respect.

So I obeyed the 'cut and connect' principles, but I feel White is falling seriously behind.