Bent four in the corner is dead

Topic diagrams 1 and 2 show a fully surrounded white group whose eyeshape can be reduced to the L-shaped bent four in the corner shown in the reference diagram. Such a surrounded group is referred to as bent four in the corner. Note that in the topic diagrams, White cannot play inside the eye, otherwise she will be dead with a three-space dead shape. If White has no unremovable ko threats, then it can be proven that the White group is dead.

Under the Japanese rules, the bent four in the corner is always dead as a rule. This is because the determination of life-and-death at the end of the game effectively assumes that the player of the surrounded group has no unremovable ko threats.

In the proverb, bent four does not refer to the actual bent four shape but every other shape that is reducible to it; in other contexts it may well refer to the shape.

We show that without unremovable ko threats bent four in the corner is dead, in the sense that any group can be killed whatever the defender (here: White) does if (i) it has the eyespace shown in Topic Dia. 1 or 2, (ii) it cannot connect to the outside, (iii) none of the surrounding stones can be captured and (iv) the defender has no unremovable ko threats. It may, however, occasionally be unprofitable to do so under territory scoring, while under area scoring it is always profitable.

Note first that White can do nothing to save her group: by assumption she cannot connect to the outside or capture surrounding stones, but if the plays in her eyespace she will reduce it to a killable shape. Hence, White has to wait for Black to attack it if he so wishes.

When there are no unremovable ko threats, Black can wait until the end of the game, and proceed to fill up all outside liberties and remove all Whites ko threats (Dia. 1.1). Next, Black turns it into the L-shaped bent four with

will capture the entire White group with a, hence White dies.

Not that under territory scoring removing ko threats can cost points; it is conceivable that this means it is not worth killing the bent four even though the above procedure would work.

For the other common kind of bent four in the corner, the procedure is essentially the same.

When bent four in the corner can live

Note that having an existing

stone, or making the mistake of playing the

stone while White still has at least two outside liberties, actually allows White to live unconditionally. The reason is that White can capture the black stones with

, and then live via oshitsubushi with

If White has only one outside liberty, she can no longer live unconditionally with oshitsubushi, but she can capture the four stones any time she wants to to start the ko fight.

Bent four in the corner under different rulesets

Under Japanese rules, bent four in the corner is considered dead and is removed without playing any ko.

The current Japanese rule is that in the determination of life and death at the end of the game, after play has stopped, only a pass for a specific ko will allow that ko to be taken back. Effectively, these rules imply that the player who needs to take back the ko has no unremovable ko threats. Applied to bent four in the corner, these rules mean that it is dead.

The first written Japanese rules, in 1949, had a special rule that bent four in the corner is dead. This ruling has been discussed ever since, because of the fact that some[1] games contain unremovable ko threats. Many felt that that made this rule unfair to the defending side in this position.

Caution even under Japanese Rules

Under Chinese rules or under rulesets where life and death questions may be settled by actual play rather than decided by virtual play, the ko should be played. Such rulesets usually provide means to remove dead stones by playing inside your territory after the game without losing points (e.g. by using area scoring or pass stones). Thus, it costs nothing to remove all ko threats before starting the ko, so the bent four in the corner is still usually dead.

In this case, however, unremovable ko threats can make a difference.

If the defender (White in the positions above) has large enough unremovable ko threats then, when the attacker starts the ko, the defender can make such a threat and retake the ko. If the attacker has no more threats, the defender may then capture and live. Some unremovable threats are, however, son-ko (point losing), and in any case it will of course be necessary to weigh the value of the threat against the value of the group; see also ko threat rule of thumb and ko threat playing order.

If the attacker does still have threats, they will, unless prevented by a superko rule, make a threat and recapture. The fight will finish when one player is unable to continue it, which, assuming a superko rule, may happen in two ways:

It is possible that both players have an infinite supply of threats, e.g. from a double ko seki, and in this case the superko rule will become applicable.

If a double ko seki is the only infinite supply of threats, then a position ``P`` will be reached when the bent four ko can (legally) be taken and, for the first time, there are no other threats left, so that all remaining threats come from the double ko. This arises when either:

In particular, if the bent four ko was started with only a double ko seki, any other threats having previously been removed, the attacker makes the first capture, and can thus win the fight, being in the position of ``T`` in the previous paragraph. This is illustrated below for Dia. 2.13 and a small double ko seki (on a reduced board):

Still assuming superko and no other threats and depending on the values of the bent four position and the double ko, the attacker (``A``) can first play out all remaining gote moves, as otherwise the defender (``D``) may get to start on them, which is never a disadvantage (PJT thinks: [10]). Thereafter optimal play might be any one of the following three possibilities, (α / β / γ):

Hence the attacker gets to choose which of these three scenarios is best for him and plays correspondingly, taking into account:

Since making territory in bent four is usually or always smaller than winning the double ko, (α) can be probably be ignored so that ``A`` should start the bent four ko and then answer or ignore ``D``s threat according as as the swing in the double ko is greater or smaller than that in the bent four. As a rule of thumb, the swing is twice the number of board points in dispute, so playing in the position affecting more stones is probably correct.

[10] PJT I am not sure yet if other follow-ups that arise from resolving the two ko positions can affect this. Perhaps there is a strategy transformation proof?

Could someone write an overview of how bent four is treated on the different Go Servers?
It is one thing to say that one would apply Japanese Rules and another to bring them into practice via an electronic medium, most probably without a referee. Which server does actually have this phase where only a pass is allowed as ko threat?

My understanding of Japanese rules on go servers is that they are simply not implemented properly, at least on KGS. I have personally lost a game because it was played under Japanese rules and my opponent had a shape that would become bent four once played out. The dead shape was disputed by my opponent and I was faced with the choice of either filling in all of my opponents ko threats and playing it out, or just playing it out and ignoring a threat. Either option would lose the game by about ten points. Under Chinese rules, I would have simply removed the ko threats, without losing any points, and then killed the bent four. The worst part about it is that on KGS Japanese scoring is used by default and few people bother to use area scoring, so this situation must be extremely common
 Anonymous

zinger: I think that extremely common is an exaggeration  I have played over 2,000 games of Go and never once had a disputed bent four. Besides that, it sounds like the problem is not that KGS is implementing the rules improperly, but that the opponent did not understand the rules. After all, a dishonest opponent can wrongly dispute life and death under any ruleset.

Some rulesets do not have the notion of wrongly disputing life and death. There is no such problem in PlayGo which uses AGA rules.  Tomek Czajka

KGS does implement rules improperly, especially those titled Japanese Rules on this server. The programmer has told me: One should occupy all non-seki-dame because KGS makes scoring mistakes otherwise (it is well known that KGS does indeed); where the players cannot agree on scoring, they are supposed to ask a third person to arbitrate; needless to say, implementing and executing complete Japanese rules is theoretically impossible; there are several Japanese Rules rulesets, so a server cannot implement them all at the same time under just one title. To describe all this, I speak of KGS-Japanese Rules. RobertJasiek. 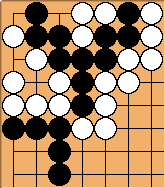 tywin: I stumbled across a position that is very similar to the bent four in the corner. 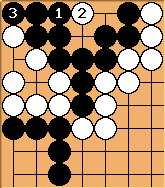 If Black plays first, he can start a ko. 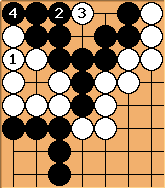 But White cant prevent the ko, or he dies (eye vs. larger eye).

So, just like the bent four in the corner, Black can wait until the end of the game, fill in all ko threats, start the ko and capture.

I believe Black would have to play out the ko to kill the white stones. Even if you take the Japanese ruling on bent four in the corner, in this situation Blacks group does not have two eyes on its own, so fighting the ko would be necessary. If Black doesnt think they can win the ko because of unremovable ko threats, I suppose it would be seki?

Bill: By Japanese rules, Black can prove that the White stones are dead by hypothetical play after play has stopped, because White will not be able to take the ko back.

[1] Many games in number, but a tiny fraction of all games.

[2] Well, it can be more complicated than that too, but I think Ill leave that for some other Robert.

Harleqin: I wont say it is complicated. The rule only applies after the end of the game. If the attacker is forced by circumstances to actually remove the dead stones before the end of the game, then he will obviously have to fight the ko.

Bass: Interestingly, if the surrounding group has only one four-space big eye, then the same rule works in exactly the opposite direction, and the bent four in the corner is unconditionally alive. See suicidal tendencies for an example.

[3] A fresh position in the sense that no position after it can be the same as any before it, given optimal (or moderately rational) play. Examples are filling a dame between two live groups or is creating a definite eye, as may happen as a ko threat and answer.