This position is given as "Item 14" on

http://harryfearnley.com/go/bestiary/rule_challenge.html with a comment "I think that suicide plays a role here - can anyone explain this position?", so here's some analysis. 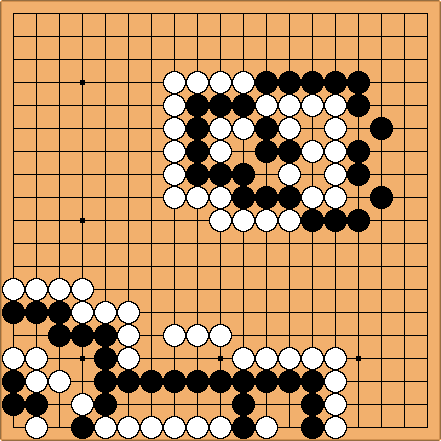 Both the situations are dependent on the rule set used, or more specifically, whether or not suicide is allowed. [10]

Black must respond to

. Otherwise white can play at 2 and make a five-space big eye, which would win the capturing race.

Normally, the best white can do is to play

. Black will then throw in at the marked stone, and both sides have an equal sized big eye, and the situation is a seki.

If suicide is allowed, white can play

Black does not have enough time to capture the six stones along the bottom, so black dies. The marked points are miai for two white eyes.

Black can prevent white from making two eyes by playing

After this, white has plenty of time to play elsewhere, since black cannot play anything useful here. In this situation, the bent four in the corner is surprisingly alive, for the exact same reasons it is usually considered dead. (see below)

After white has played elsewhere to her hearts content (that is, white removes all removable ko threats first) white can fill all the liberties (except one common one) while black must form a bent four in the corner just after white has reduced the common liberties to one.

at the marked stone.

Black has no choice but has to answer like this. However, if there were no unremovable ko threats, when white takes the ko with

, black has no chance to survive. 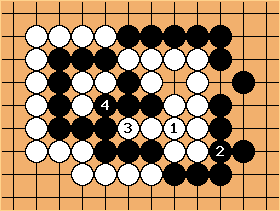 White cannot fill the liberties like this, since black will win the capturing race by one move. 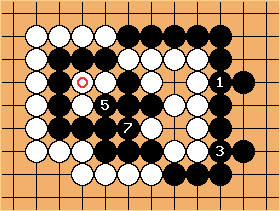 Black can start a ko like this. However, if suicide is not allowed, white cannot prevent this in any way. Therefore black can freely choose when to start this ko. This means that black can remove all (removable) ko threats first, and only then start the ko, which he will then naturally win.

Under Japanese rules, black does not even have to play it out, as the rules say ko threats (even the unremovable ones) disappear automatically at the end of the game, and for this reason white is unconditionally dead. 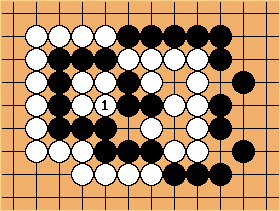 [21] If white can get rid of the bad shape inside the eye, then an atari is later possible inside: 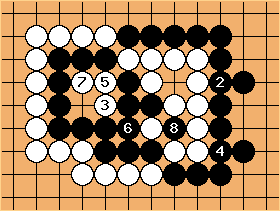 [20] White 3 and 5 now force black to start the ko prematurely. Black has an internal ko threat (capturing the three stones) which leaves two liberties for black. In total, white must have 3 ko-threats, and has to ignore 2 black ones to win.

tderz This diagram derives from dia. [21] and there seems to be no difference in this position and that of dia [22].
What has White achieved over diagram [10] above? From a temporarily seki down to the last liberty and direct ko against herself,... what's the benefit? Except perhaps if you are a komonster. The diagram seems to teach how to convert a temporarily seki into a ko and more important, allow to play it in the middle of the game. Aaa, I got it very late, it really depends on the rules. 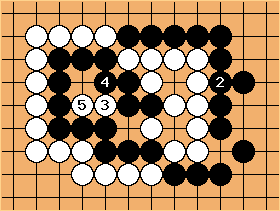 If black does not like the ko in the previous diagram, he can also choose to make a seki.

Putting the pieces together.

If suicide is not allowed, then white should make a seki at the bottom. As is always(?) the case with sekis, this creates unremovable ko-threats. However, these threats lose many points if answered (more than are at stake in the upper group's ko), so they are not usable as threats even if the ruleset does not declare the upper white group unconditionally dead.

If suicide is allowed, then white should kill the lower side black group. After that, black should choose the seki variation for the upper group, so that he has an unremovable ko threat there, with which he gets to kill the upper white group while white kills the lower group.

Please forgive me any errors in my analysis, this situation is clearly conceived by the devil or at least one of his apprentices :-)