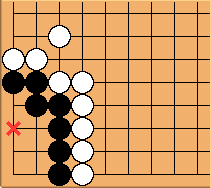 In this shape, the point

is the vital point. A Black play there leads to 6 points of Black territory. (Black has other ways of doing that, but those each leave at least one ko threat, whereas

If black has two or fewer outside liberties, which is likely given the shape, then

can turn this shape into a throw-in ko or a seki. With more outside liberties, Black can limit White to semedori.

Two or fewer outside liberties 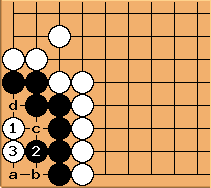 If white takes the vital point with

, Black's best response is at

(but see later what happens if black plays B2 at W3).

, Black will not want to play at b because this move reduces the eyeshape to a pyramid four, thus killing the group in gote. Playing at either c or d is also bad, as White would reduce the eyeshape to a bent four in the corner via a move at a.

Thus, Black only has two options in this position: 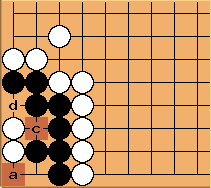 elsewhere, White has two choices for playing locally: making a seki with a, or playing the approach move at either c or d to prepare for a throw-in ko. 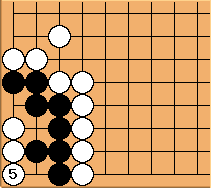 When neither side has enough ko threats, the simplest variation for White after Black plays

elsewhere is to make a seki with

. However, because this move is not urgent and removes the possibility for a ko (see aji keshi), White should normally wait until the end of the game to play it.

If White has more ko threats than Black does, White may capture the corner via a throw-in ko. However, it requires one extra ko threat and allows Black to play two additional moves elsewhere relative to the seki variation shown above.

Whether this exchange is worth the cost would depend on the rest of the board. If the trade is not profitable to White, it is usually better to leave the position alone after

as shown earlier and wait until later to decide whether to start a ko or to make a seki. 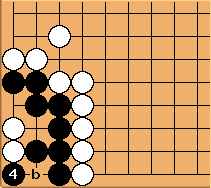 as shown, White will most likely play elsewhere or capture the ko by playing 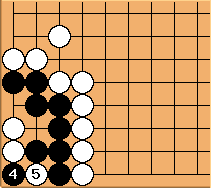 White may make a seki at any time by connecting at

. As in the case Variation #1, this is more likely to occur if neither side has enough ko threats.

elsewhere rather than making the ten thousand year ko). However, this variation is not necessarily inferior, as the alternative of playing

elsewhere earlier gives White the choice of what to do in the corner:

If Black has two more large ko threats than White does, this variation may be played to live with points in the corner. However, White will get two moves elsewhere in the exchange.

Since Black has much less to gain from settling the corner immediately than White does, this exchange is unlikely to be profitable in most situations. Therefore, Black would most likely wait until the endgame before committing to playing out the sequence starting with

even if he does have enough large ko threats. 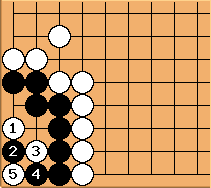 This way the position becomes a direct ko, which is an inferior result for Black because he will get less compensation in exchange for the corner if he loses the ko (two moves elsewhere, compared to 3 or 4 in the above-mentioned variations). White can finish the ko by filling at

; it would be a mistake to play one of the other inside liberties instead. 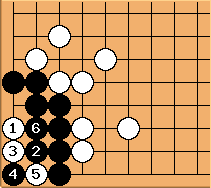 Although the situation shown here is perhaps unlikely to occur in real games, it is of theoretical importance. If Black's group has three or more external liberties, White can only cause semedori, as Black can set up an oshitsubushi as shown at the end of this section. 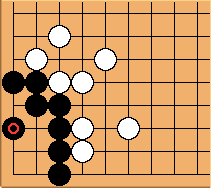 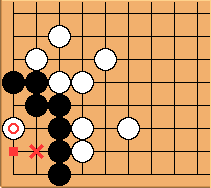 , then White kills outright with

makes the corner a direct ko: Black can win it with

, and White can take it as in the "Variation for B​2" section.

The rest of this section assumes that

has already been played. 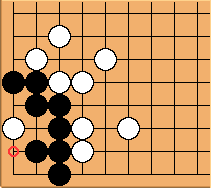 is the vital point. Black playing there is a 1-point reverse sente that makes Black Benson-alive with 6 points under territory scoring.

Accordingly, the rest of this section assumes that White already played there. 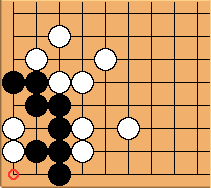 At minimum, White is threatening to make seki with

. Alternatively, White can fill an outside liberty to revert to the "Black plays elsewhere with B​4" section. (I don't know whether-or-not White should ever play somewhere else in the corner first.)

might be worse for Black than having passed. However, Black should not play anywhere else inside the corner, so the rest of this section assumes that Black already played 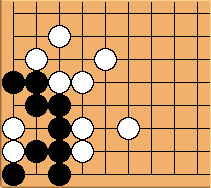 Black will eventually need to add 2 more moves in the corner, since otherwise, after the outside liberties are filled, White could take and fill the ko for seki. In fact, the next 2 times White fills an outside liberty, White will be threatening a ko to kill. 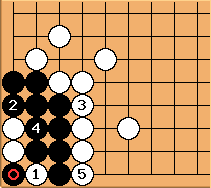 Three liberties is enough for Black to crush the ko. Notice that without the last of those liberties,