Meaning of the term 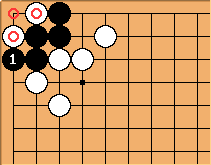 is oshi-tsubushi, literally "squashing push", a Japanese term. See below [1] for translations.

, White's connection at the marked point is an illegal suicide move under most rulesets. Later Black can capture the two White stones, gaining two eyes and life. 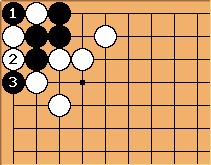 , White plays under at

and Black will die. Taking with

is useless; White throws in with 4 at

and Black only has a false eye here. (If instead of

White mistakenly treats this as a ko fight, making a ko threat and then retaking the ko, Black gets a second chance at oshi-tsubushi.) 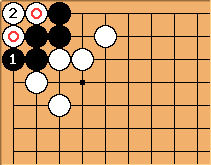 Under rulesets which allow self-capture,

is possible; the three White stones are then immediately removed. If White can play at the

point it would kill the black stones.

now makes life, and so because Black must respond to attain it, the self-capturing move can be used as a ko threat. 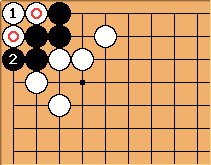 If White to play in the original position, he can kill Black by connecting at

and forming nakade. If

captures the three stones, White 3 at

holds Black to one eye. 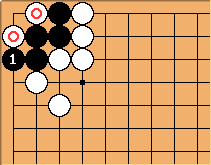 Oshi-tsubushi can be prevented by damezumari. In this position, Black's lack of liberties means that after

he is still in atari. Black lives with the sacrifice

[1] There is no consensus on an alternative English term for Oshi-tsubushi. Robert Jasiek in his books uses internal liberty shortage for this kind of life and death tesuji. The everyday translations, crush, squash, and smash, are also occasionally seen. A related concept is Eye by exhaustion, a term coined by Tamsin.