Here is an elementary life and death problem presented in Kageyama's Lessons in the fundamentals of Go. I was wondering about an alternate solution I think I found. Here it is: 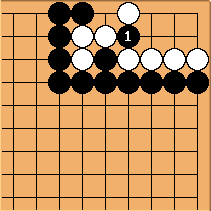 This is the move I am currently thinking about. 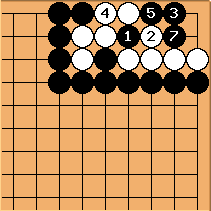 If White takes, the shape is reduced to a bulky five and Black can take the vital point: 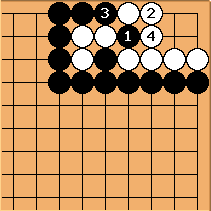 If not, Black can take the group of three and the best White can do seems to be a dead shape of square four, or maybe bent three. 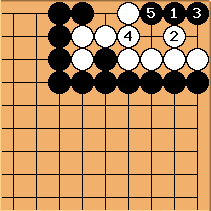 This is the given solution, resulting in a dead bent four in the corner.

Can anyone give me a pointer on whether I'm right or not with my alternate solution?

Bleahdom?: The original solution gives a bent four in the corner which requires a ko to kill anyway. So I don't quite understand why would this situation be any different?

unkx80: By Japanese rules, bent four in the corner is dead. See that page for details.

Bill: And by area rules it is almost always dead.

Thanks for the quick reply -- my brother, to whom I give a few stones when playing, pointed out that it'd end with a ko if I went for the three stones. I worked out the 5 at 6 idea after that. It felt like a nice move though :) --Splice

from the previous diagram, what about this?

zinger: That would work, if that was the correct position :) However black's marked stone isn't actually there (and white still has three stones on the left).