The order in which ko threats are played is a complex matter. Factors include:

In general, if your opponent has N local threats, you want to keep your N largest threats in reserve, if possible. (And if you do have to play them, play them bottom up.)
This is not just psychologically correct, but technically correct (assuming that threat size is the deciding factor), because if your opponent ignores your threat, his local threats disappear or become smaller, while your large threats remain on the board. Retaining them may allow you to win a later ko or force your opponent to avoid one.

3. Whether a ko threat is a double threat

Some primary ko threats are miai, and may be played by either player. In general, they should be played as soon as the ko fight begins, or in preparation for the fight, to prevent the opponent from playing them. 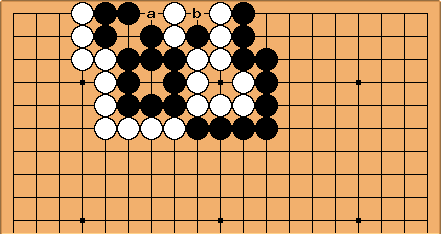 The general principle is: remove double threats before you first capture the ko.

4. Whether a ko threat is a losing threat.

Some primary ko threats are costly to play. In general they should be played as late as possible.

5. Size of the reverse sente of a threat

Other kos may exist on the board, or may arise later, or may threaten to arise. In general, ko threats with larger reverse sente should be played early, since they will disappear naturally earlier in the play if they remain after the ko is decided than threats with smaller reverse sente.

6. Stage of an approach ko or other hyperactive ko

With hyperactive kos one player, instead of winning the ko, may make a play that makes the ko hotter. (With an approach ko she may be forced to play an approach move before she can win the ko.) In general players should save their large threats for the later stages of such kos, after they have become hotter, and play their small threats early.

Technically the smallest threat you can play is one such that it makes no difference whether your opponent ignores it or not (if such a threat exists). If your opponent answers a smaller threat or ignores a larger threat, it is usually an error. You are more likely to induce an error by making threats of around that size early. On the other hand, you are more likely to make an error if you try that tactic, as well. ;-)