Jungsuk In Our Time

Jungsuk in our Time

Published in 2001 by the Hankuk Kiwon and distributed in the United States by Slate and Shell and Yutopian. English translation of a book by Seo Bong-soo (Seo Pong-su) and Jung Dong-sik (Cheong Tong-sik) covering contemporary 3-4 corner openings (jungsuk) from the Korean point of view.

All theme diagrams are full board diagrams. The diagrams come in 41 distinct sets. A set consists of a primary sequence, a position that results from the joseki under consideration, and 72 secondary sequences. The secondary sequences explore a variety of continuations, discussing the advantages and disadvantages for each player and under what circumstances the sequences are playable. (examples from the book below)

The book is mentioned, along with a number of other joseki books, in the GoGoD article

Are the joseki books wrong? about a variation of the 3-4 Point High Approach Outside Contact Sansan joseki that appeared in a game between Abe Yoshiteru and Sakai Takeshi. (see Secondary Sequence 2 of the 10th Primary Sequence, p.85)

Japan4: Having just received the book I am extremely pleased with the clean layout and easy to follow format. I own and have seen a couple other joseki dictionaries and this one is by far the most useful format/layout of the ones I have encountered. Hopefully this will make joseki easier to learn... I'll keep you posted

Stormer: Ive been studying this book for the past week. And I am very happy with my purchase. In particular I like how it shows many variations explaining joseki mistakes. This is my first joseki book, Up until now I have been using Kogo's Joseki Dictionary for joseki questions. This does appear to have a lot of sequences that do not appear in Kogo's.

No real table of contents in this book. Or, well, there is one, but it's a gathering of diagrams and patterns that will be discussed and analysed farther in the book. 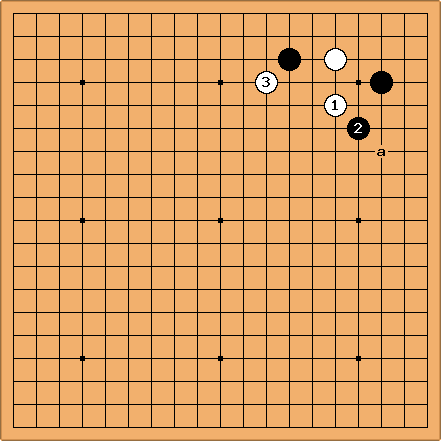 Primary Sequence 22
Among White's possible responses to the one-line pincer, the commonest one is to jump at

. Although it was often played in the past, Black a is a little bit loose and has been replaced with Black 2 in the diagram. White 3 is also normal. 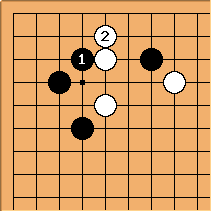 Diagram 1
Black 1 attempts to secure the corner and sounds out White's response. Among the various responses, White 1 [sic] is the commonest. 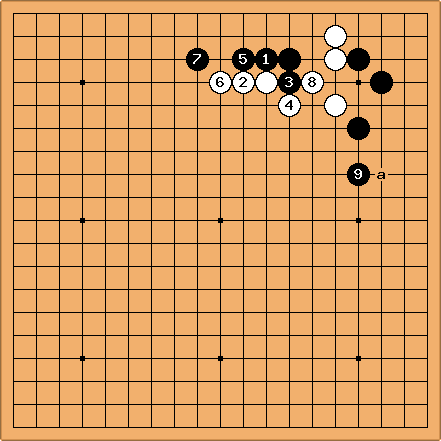 Secondary Sequence 1
Black 1 is played when the ladder is not favorable to Black. Black plays 3 to weaken White's shape. After Black settles the upper side, it is good for White to strengthen himself with

. Then Black must protect himself from White's approach at a by playing 9. 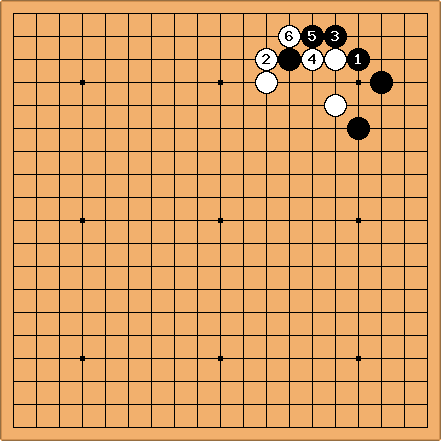 Secondary Sequence 2
When the ladder mentioned before is unfavorable to him or when he prefers thickness, White can block at 2 and secure the upper side. Up to 6, Black has gained in the corner and White has gained on the upper side and in the center.

One additional diagram follows in the book. 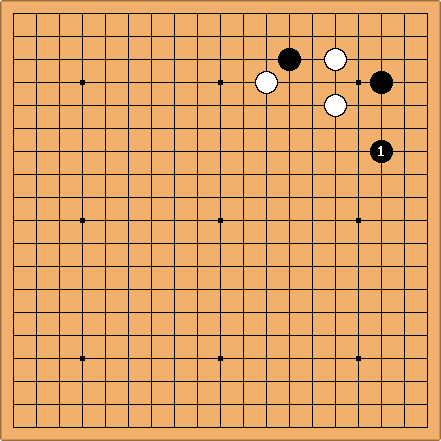 Secondary Sequence 3
Though it is old-fashioned, Black 1 is still played when Black wants to avoid complicated variations.

Velobici: such are my impressions from seeing the book at Go club last night. If you have the book or are more familiar with it, please correct the above comments.

minismurf: this is not correct, most of the diagrams are full board, but as in many korean books, this is simply the presentation format for each of the joseki, it doesn't mean the whole board is taken in account. Usually the whole board consists of the joseki and 0-3 hoshi stones.

sergio0p: I disagree with minismurf at some degree. True, in some diagrams the whole board has little relevance. However, in many diagrams the other stones in the board do play a role. For example, just go to the high approach to the 3-4 point and take a look at the most orthodox/simple joseki: the authors pay a lot of attention to the continuations in the rest of the board, e.g. should white split black to avoid a san-ran-sei formation on the part of the board opposite to where the joseki was played, etc ... Moreover, even the old Ishida Yoshio's joseki dictionary, has whole board considerations when he shows examples of real-life games.