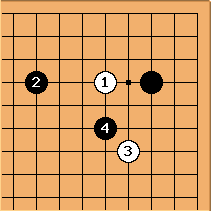 is attributed to Kajiwara. This is an imaginative variation.

is kado, or angle play, leading to an unexpected trade of the corner for influence. 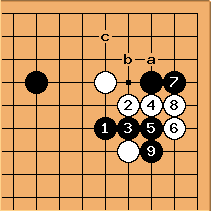 This is the main line of this variation.

adds to the sacrifice, installing serious corner aji. The big question now is how White can close down the corner, while Black tries to build extra outside influence. This joseki is still current in professional play, with White a, b and c coming next. 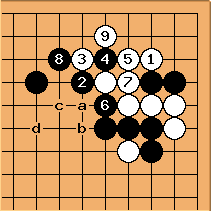 seems to be the most common continuation. Black sacrifices yet another stone with

, and uses it to squeeze white into the corner. Note that white cannot cut with white a: Black will answer with black b, white c, black d. White can capture one or even two stones, but black's main force will not be divided. There is a variation at 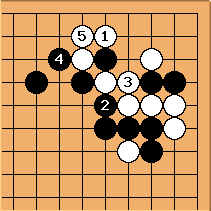 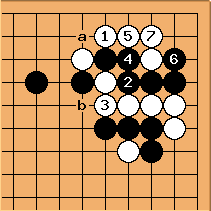 After this exchange, there is a simple variation at b with once again an exchange of territory against influence as a result, and there is a long variation at a, in which Black takes both corner and influence towards the bottom but White makes territory in between and some central influence. 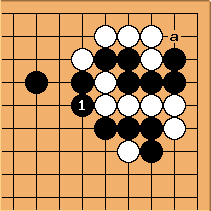 ; if White plays greedily at a to take the stones then : 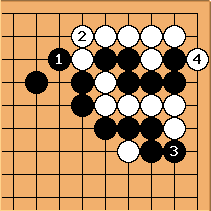 in the next diagram to avoid being shut in : 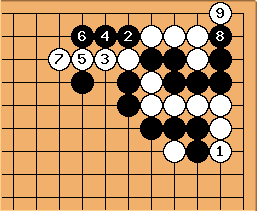 Note that Black should have a stone in the direction of 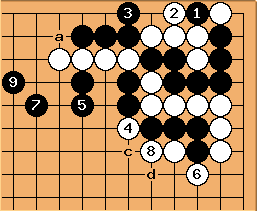 The exchange is simple: White takes the stones and Black tries to enclose White who has a forcing move at a. Black cannot play at

because of White c Black d and so on. 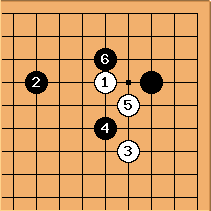