When To Use The Magic Sword

Chris Hayashida: Hopefully this page will further explain some of the variations of Magic Sword Joseki.

First of all, the set up: 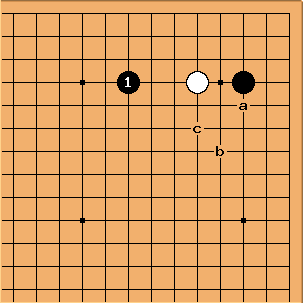 Let's look at the attachment at White a first.

The followup depends on the status of the ladder going to the lower left.

If the ladder works for Black, he can answer 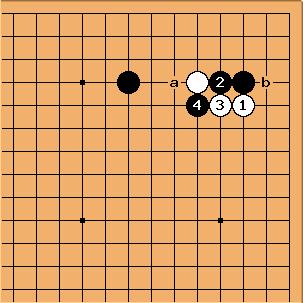 White can't play at a because the ladder doesn't work. The diagram for White b follows: 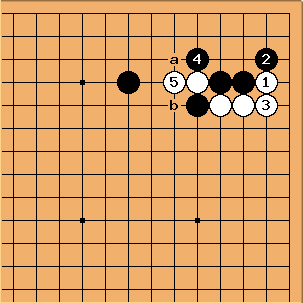 Black b looks like more of a severe move 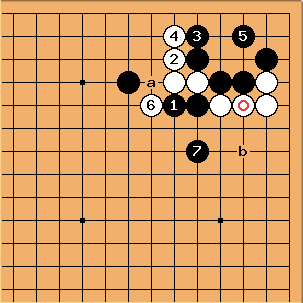 is aiming at the cut at a or cutting off the group on the right at b.

Chris Hayashida: This means that the tsuke (marked) was bad to begin with if the ladder favors Black. 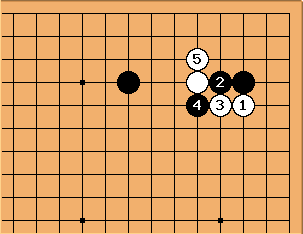 Harleqin: What do You make of this variation? I encounter it frequently, but there seems to be no coverage of this on either senseis or gobase. 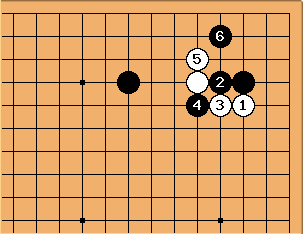 secures the corner, leaving White with two weak groups. (In some variations Black may sacrifice the corner, perhaps.) 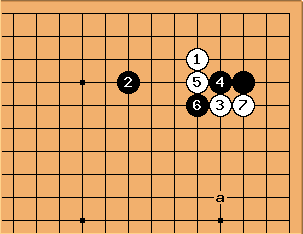 Harleqin: I found that the above pattern does exist in pro games, though in different order, and only if white has a stone around 'a'.

mgoetze: It seems to me that the most reasonable answer to the page title is: never. I just searched Gobase for the following position: 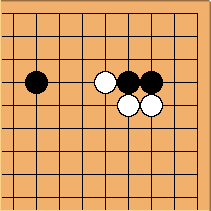 Note that this is only a 9x9 subboard, so almost any global context is allowed. The result: a whopping 12 hits. There must be more than 24,000 games in van der Steen's database that have been played since 1931, in other words: since this sequence first became known, it has come up in less than 0.05% of all pro games. Certainly there are many rare joseki that are less well-known but come up much more often, so it seems to me that studying this "joseki" is quite probably a waste of time.

Dave: Yes, I know exactly what you mean. Personally I only eat at McDonalds, only listen to Britney Spears, and of course only use Microsoft software. After all, popularity = value, right? Of course that's why we all started playing Go in the first place - because everyone is doing it! :-)

Djaian: I looked for the same position in my database (a commercial program) which has 45'000 games. I got 24 hits. So it is about the same ratio as with van der Steen's database. But some of these games are recent ones, for example Yamashita Keigo vs Cho Chikun in the Kisei tournament, 30th of January 2008. Anyway, I agree with Dave. If a joseki is rare, it is not a reason to ignore it. I therefore decided to study that game between these 2 top pros. By the way, in ordre to be exhaustive with statistics, I will add that in my database a little less than 2000 games have this high pincer, and in 10% of them (184 games), the answer is the outside attachment. 24 games eventually lead to the position. If 13% (24 on 184) of the outside attachments lead to this joseki, then it is probably worth to know it.

Anonymous: A lot of responses don't appear in pro games if they have to be elicited by the opponent making a bad choice regarding a ladder. This does not mean that studying these variations is without use. How do you know the right sequence when you don't understand the alternatives. If you ever attach on the outside then it seems this is knowledge worth having. I don't see why you'd brush off something so casually and seemingly with little thought. Nobody is forcing anyone to examine these variations.

mgoetze: Even the outside attachment itself is quite rare in pro games, I don't see why I would need to worry about it much. But when it is played, it is much more common to respond with a hane, even if the attaching player does not have the ladder. Example: Cho U (White) vs. Yamashita Keigo (Black): 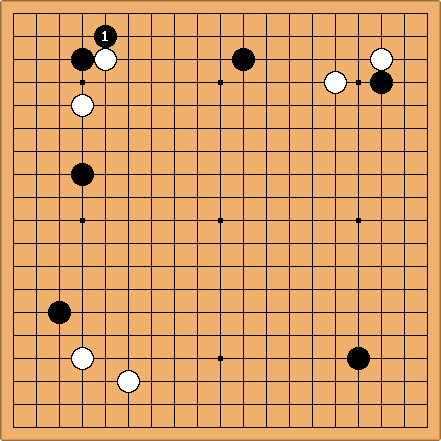 The reason I put a note here is that people might well think, if a joseki has it's own name, it must be important. This is not the case, thus the clarification. If you want to study it anyway, no one's stopping you.

BobMcGuigan: The ladder mentioned above is favorable for Black. It was also mentioned above that if the ladder favors Black, White should not play the outside attachment. Yet Cho U played the outside attachment in this game. And Yamashita didn't play the moves which supposedly lead to an advantage for Black. So the question is why? It is safe to assume that Cho and Yamashita would be aware of the above analysis if it is correct so, is something wrong with that analysis?

Dieter: Bob's last comment needs to be explored. There is no consensus on this item whatsoever. I'll try to find time.

Bob: Looking at it again I suggest that maybe this is a case of the whole-board situation making a locally advantageous variation unfavorable. Or it could be a sente-gote issue related to Black's tenuki in the upper right corner.

Bill: If the purpose of studying joseki is to learn what to do in a particular situation, then mgoetze's comment makes sense. Why memorize complex variations that almost never come up?

But memorizing complex variations is not worth much in go, anyway, IMO. Much better to understand the properties of the corner, the tesuji and strategy involved in joseki, and what makes a line of play good or bad in a certain situation.

When I began my serious study of joseki, I started with the ogeima response to the kogeima kakari to the corner star point. That is hardly ever played in modern times, but was popular for centuries. It has many well researched variations and traps: a wealth of study material.

One reason I did that was to avoid the temptation to memorize. I am less critical of memorization these days, but I still think that it is more important to study deviations from joseki than joseki proper.

Bob McGuigan: The Japanese 9p Aragaki Takeshi attended the 1993 U.S. Go Congress and, in a speech there, advised people to play the ogeima response to a 3-6 approach to a corner star-point stone because it would give a lot of material for study and learning and get out of playing memorized patterns.