At my last tournament I came across this deviation from joseki (or perhaps deviant joseki would be more appropriate) . White

is not the normal move in this joseki, but was my answer correct? Normally one would extend from a crosscut, but I couldn't see a way to make that work. 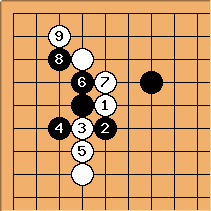 pwaldron?: I think extending may be the wrong way to go here. You would like to keep your stones connected if at all possible. Here are a couple of sequences I would look at.

should certainly not be Black's first thought. It isn't often that playing into a "double hane-at-the-head-of-two" is good.

IanDavis: This is what I thought as I played, but the other path seems to allow some ko like play for White, and I couldn't see that this line was bad. Normally one would extend from a crosscut. So Black 4 could have been a descent for example? 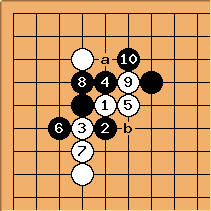 This looks fine for Black, especially if the ladder at b is good, so that White can't cut at a. 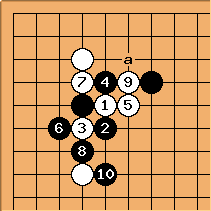 If Black throws in a cut midway through the sequence, you look okay also. It's tough to imagine a ponnuki being a poor result. There is a potential followup at a later since White is a little short of liberties. 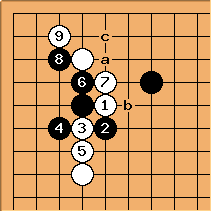 Even continuing from your sequence, the Black cut at a has a followup at b, so White has to give up the corner. It's a big corner, so Black won't be taking a loss here unless White has a mammoth moyo on the part of the board not shown. 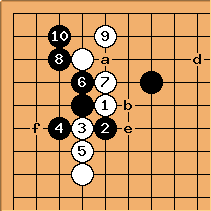 tderz: Not commenting on any previous shape problems,

is a mistake due to White's good a - b miai (as pointed out above by pwaldron?).

Typical shape to save what's left to save would/could be now c, whereon Black plays

himself.
Globally White would like to pincer now around d and further away,
but she has to come back to go in honte for safety with e.
This could indicate (indicates) that the cut

was premature and overambitious.
Later White could close off the lower side with clamp f etc. 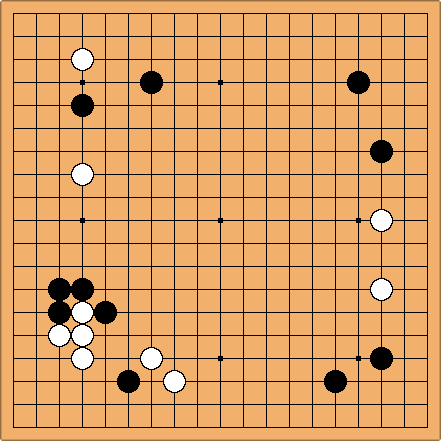