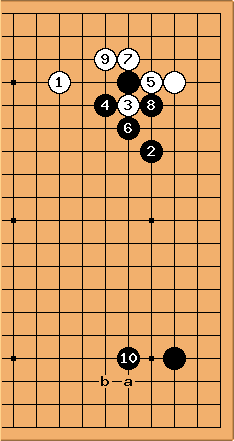 played in response to

in a few dan games recently and so i thought i'd give it a swing.

Upon seeing it my opponent says 'oh, you like this joseki, do you. I think that white gets a better position.' and slaps down

'Hmm, maybe', says I, thinking he means the diagram marked main line in 34PointHighApproachTwoSpaceHighPincerOgeima and replied with

. I was somewhat puzzled, but we played on to

, whereupon my opponent commented that, maybe we'd got the order slightly wrong, but this was joseki as far as he was concerned.

Unfortunately his Girlfriend summoned him shopping after the game ended, so we didn't get to talk about it afterwards.

IIRC, ishida says that, although not exactly joseki, when it was played in pro games, both white and black thought they'd come out ahead so it must be playable and I think that get strong at joseki says that black's thickness gives and even result.

White has the choice of heading down this path, rather than playing the main line given below. If it were considered better for white at the top level, thus, 1) white would play it and so 2) black would stop giving white the chance to play it.

to me it looks like white has got a 20 point corner at the cost of a ponnuki but even though black has a facing position in the bottom right, he also has an open skirt so it's going to be easy for white to prevent a black moyo on the right of any size.

How should black go about taking advantage of the position he has given up 20 points for?

the right way to try to use the position in the top left, or is it just a resource for future fighting in the centre?

I'd be interested in hearing what other players think of this variation. especially if you, as white would choose to play the 'main line' below, rather than take the corner. 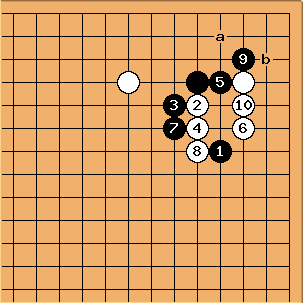 SnotNose: I think both the main line and the variation given at the top of the page are playable, in general. So, the choice must be based on (1) the whole board situation and (2) one's taste (i.e., whether one wants influence or territory).

I think kokiri has already summed up the situation as played quite well. Black has a moyo going on the right, but it is open at the top. Since it is open at the top, I wonder if Black a or b in the figure at the top of the page would be better, emphasizing the corner a bit more. White got quite a bit of territory (more than 20 points I think). All in all, I think this is a reasonable result. Let's look at the proposed alternative. 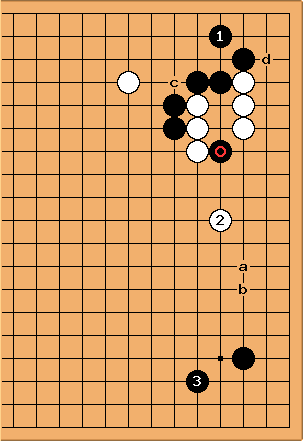 SnotNose: Suppose Black finishes up with

. Now Black has sente to play

. a looks big for Black and b for White. (In fact, a is such a good move for Black that White might play b right away, giving Black sente here.) White also has the cut at c to aim at and Black has the endgame descent of d, which is big. Finally,

has some aji, even if White plays b, so White may not get the whole right side without giving up something or spending another move. This looks quite reasonable for both sides as well.

I conclude the choice is a matter of taste but I look forward to reading differing thoughts from others.

sarge?: I've seen that first sequence in a joseki book