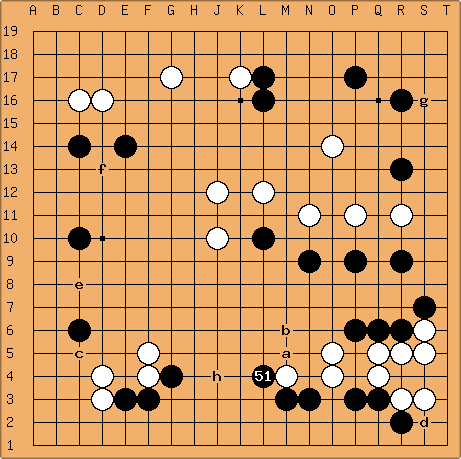 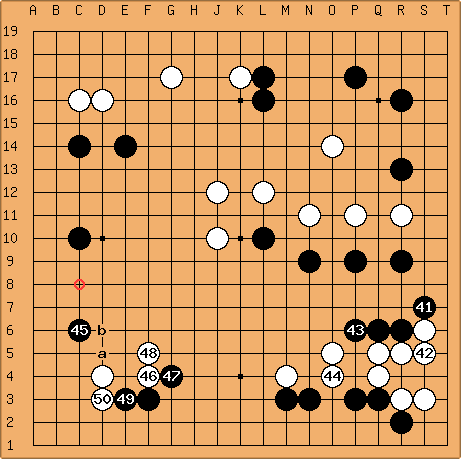 , then the white group has only one eye and needs to run. I think this doesn't work for black right now because there is too much aji around

. In other words, defending around

are miai. Supposing white were komaster, is the play at b rather than a then correct?

ThorAvaTahr: To answer your question I think we need Bill's advise, however in principle I think that s4 is generally a bad idea, unless you urgently need to make life in ko. And even then only if you can win the ko. However, i am not sure I have sufficient knowledge to answer acurately.

Herman: Quick note: If white needs to live, the descent instead of the connection at a would do the trick in this position. Similarly, the bend at

would give life (while allowing black to capture a stone with a). 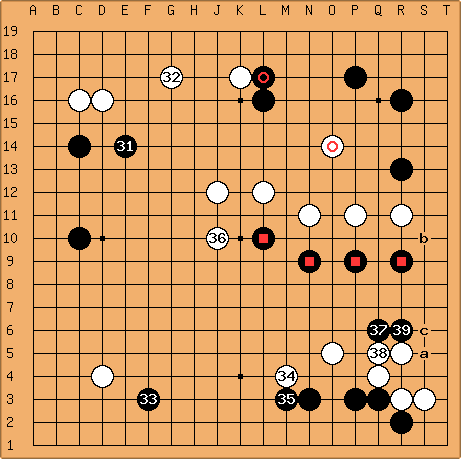 Andy: Yeah, good thing we didn't have to make any empty triangles. :) 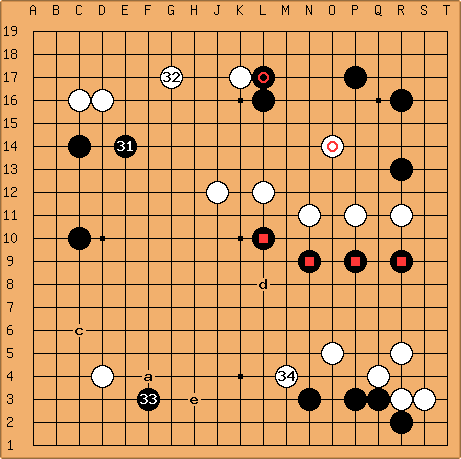 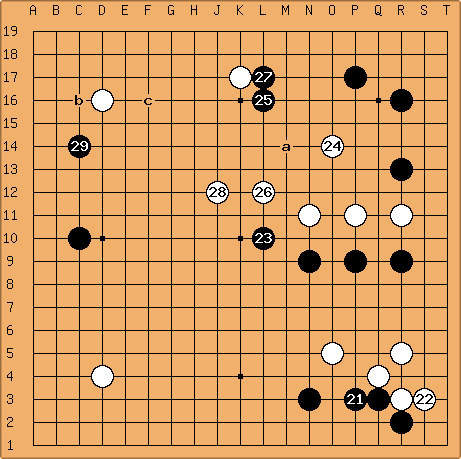 ThorAvaTahr: b) I think Andy's idea here is ok, since we cannot get sente here anyway it may be best to try to get either a big corner or a fight on the other side. If we extend to 46, after black 42 we cannot answer at 33, since it gives black ideal shape after he plays 84. But we do not have a nice alternative option for 33.

group, extends in the direction away from black's iron pillar

tapir: I seldom see similar positions in my games. I propose c) (R7) to unsettle the black group. Threatens connection underneath. If black connects against it, the forcing moves agains this connection should be enough to settle easily. It may still be a slack move, but thank god I'm no captain.

ThorAvaTahr: d) Still not exactly what i was looking for, but good enough, let's be ahead of our enemy

tapir: a) L12 should work together with

. Looks awful to ignore the shoulder hit, but that's our punishment i guess :)

Andy: b) Q13 I like a), but I'm going to suggest b) attaching to the black stone to settle the white group locally. In conjunction with

, the white group is almost alive and white can get back to the main game. Running out with this group does not appeal to me because white is going to play a lot of dame while black destroys the top and gets influence over the rest of the board. The downside to attaching with b) is it pretty much eliminates any residual aji in the upper right corner. I don't think tenuki is an option for

, even though I really love Bill's proverb.

kanzenryu: c) L11 another option to continue towards the centre.

kanzenryu: Let's have some more suggestions for the white team. New members feel free to join!

kanzenryu: We should probably make a move soon or the game will bog down enormously. It is only a teaching game after all (especially if we lose!)

ThorAvaTahr: a) I was waiting for more suggestions but they didn't seem to come. This move tries to get out without reinforcing black's stones.

kanzenryu: a) o14. Try for some eyespace, head towards connecting at the top, push into what could become a black moyo.

Andy: b) L11. I think something has to be done with the three white stones. Attaching on top of

is a shape-making defensive move. Although black gets stronger, since the black stones can already cross-under it's hard to harass these stones effectively anyway.

rmsp: how about c) L12 to keep pace with black, but not strengthen

ThorAvaTahr: a) Here I found a difficult choice. However, I do not want to attach to the black group, making it stronger, since it might still be attackable. Secondly, I will never run with a keima, since it leaves a cut. I chose a) because it makes some shape, although not my personal choice. I do not feel it is much of a reducing move though.

tapir: I thought white has no other choice than attaching at L11. (Black L12 thereafter... or we will see soon.)

Andy: a) S3. The usual idea. Make a base. Since the goal was to settle these stones, we might as well settle them all the way. I think white is doing pretty well in this game so far.

kb: Good, only move again. Good shape inside your opponent's influence is necessary. 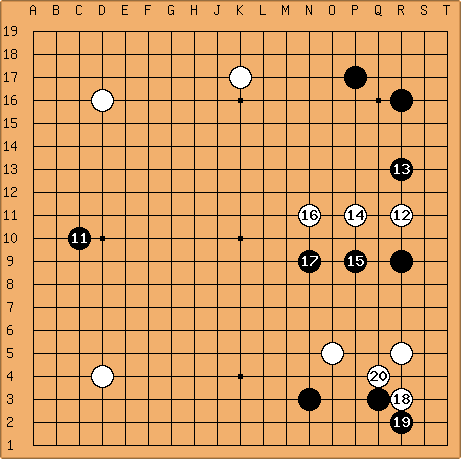 a) P11 kanzenryu: original suggestion b) Q13 MrTenuki: this can be followed by either a tsuke-hiki or a tsuke-nobi. (Note: the explanation was added later. Before he added this comment, the move was also supported by Tapir: "I say [b] just to have it in the option basket and to read the captain's explanation about it.") c) O11 Tasky: I like b a lot... still, just to give more options I suggest a light jump at e, now

can be left as a sort of kikashi having already forced Black into a somehow cramped position from his shimari d) Q9 kanzenryu: for symmetry of choice 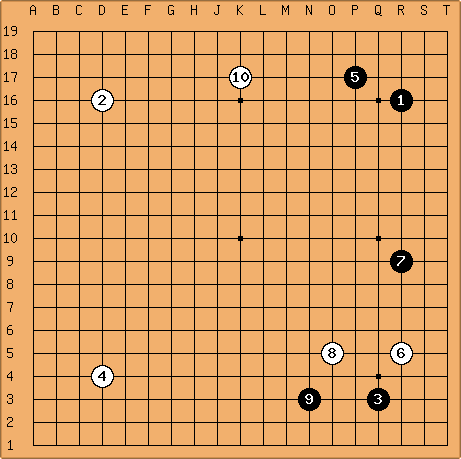 Since this is a teaching game, I thought I should share why I don't like the other three moves.

ThorAvaTahr: Why is it obvious?

MrTenuki: My original thinking boiled down to this: "R10 is a natural extension point for Black's upper right shimari. With R5, Black might be able to get a pincer + extension." But after looking at the board again, I realized that I was getting the position mixed up with the orthodox fuseki, where Q3 is at Q4-- which would mean that there is no second shimari to prevent. In this position, the pincer + extension isn't quite as good as in the orthodox fuseki: R10 doesn't count as a pincer, and if Black tries a 2-space or 3-space pincer, the "extension" would be a bit too far from the upper right shimari. 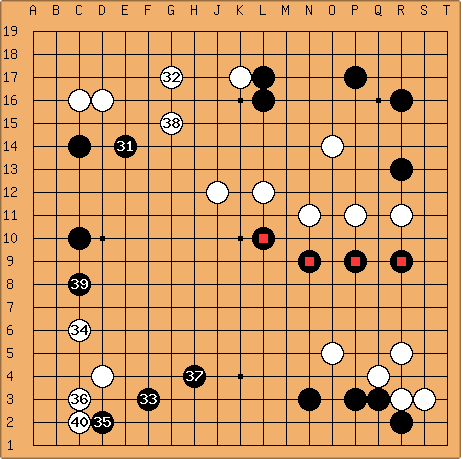 I think white is behind in this diagram and

is too well placed. 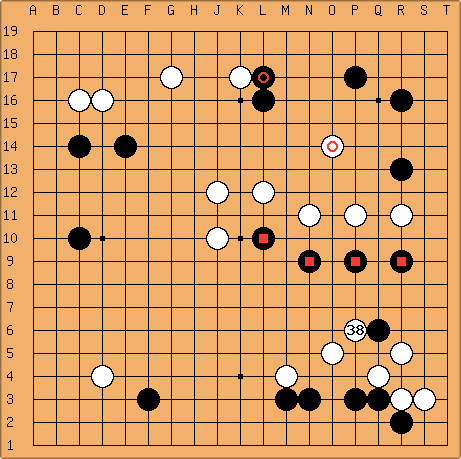 Any good for white?