This saying is likely a mistaken rendering of a proverb that says not to peep on both sides of a bamboo joint. " タケフの両ノゾキするべからず " 両ノゾキ means double peep (See diagram).

The original text of this page follows.

The black structure is a bamboo joint.

throws itself against a wall. This is worse, because it loses a liberty immediately, but the idea is more or less the same: a bamboo joint is almost as strongly connected.

On a higher level

The proverb in fact warns against moves that are not peeps at bamboos as such, but will inevitably become if you read a little further. In particular peeping at both sides of the bamboo must be avoided. Here is a nice illustration of this proverb: 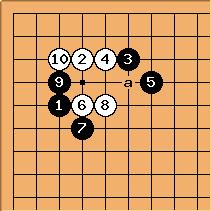 here is called a trick play in a Korean book. That seems unfair. But the point is that Black might play at a in answer. Then after

, Black would be peeping at both sides of a bamboo joint, which is taboo. One peep may be acceptable, but with stones at

and a it can't be that both are efficient. 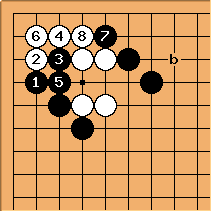 Actually the correct joseki here avoids (postpones) the other peep, too. Black should play this way, so that the kikashi

is available. This does something to cover Black's weak point at b.