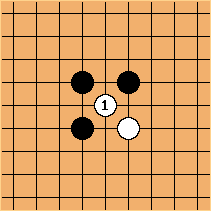 The tower peep or tower poking move is so called because the shape resembles a tower if seen from bottom right to top left.

is a peep at both Black's connections. It can also be called a double peep.

In Tesuji and Anti-Suji of Go (p. 117) it is called Yagura nozoki. Turret is a possible translation for yagura.

A yagura is literally an arrow storehouse, and most commonly refers to sumiyagura, the turrets at the corners of Japanese castle. So probably the real idea here is peeping FROM the turret from the inside through the arrow slit. In go yagura usually refers to the shape of four stones in a square formed by ikken tobis. It's famous as a shogi castle, too, of course.

From this perspective it makes sense to translate the term as the turret peep, but tower peep has become the common term in English.

On a completely unrelated note, the Japanese town of Kamakura is surrounded by mountains made of a soft stone into which prehistoric inhabitants carved hundreds of caves where they lived; later, they were used widely as graves. These caves are also called yagura, although that usage apparently is strictly limited to Kamakura.

Without support or in neutral area or area influenced by the opponent, the tower peep is a crude move, strenghtening the position at which one peeps. See crosscut after tower peep for a tactical discussion. 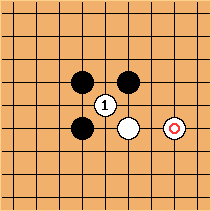 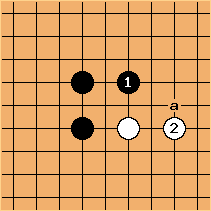 is considered correct shape. Playing at a instead increases the aji and reduces the severity of the tower peep. 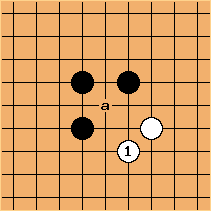 is a common threat to peep at a which may need to be answered. 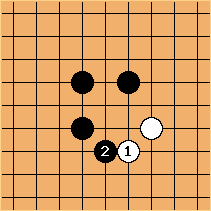 is the most common way to defend. 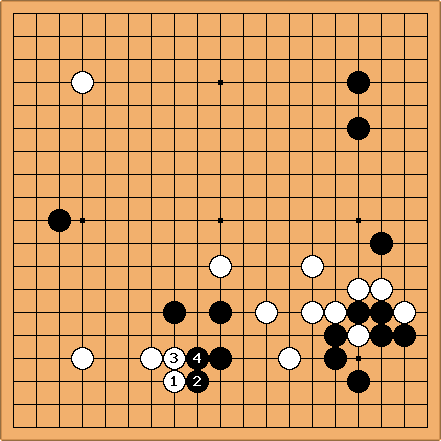 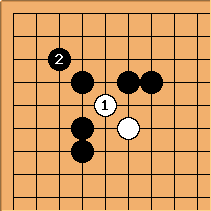 The tower peep can sometimes be defended against with this diagonal move.