The Direction Of Play

The Direction of Play("石の方向 Ishi no Houkou")
Part 12 of the series: Go Super Books

The Direction Of Play is a book by Kajiwara Takeo.

First published 1979 by the Ishi Press, a translation by John Fairbairn of Go Super Books volume 12 from the Nihon Ki-in series. The book was reprinted by Kiseido.

In the English versions of the book, the author's name is in the Western order (given name, then family name), Takeo Kajiwara.

Over six discussion chapters, a problem section and a detailed game analysis, we have Kajiwara's theory - 'a stone has power', 'move two lost the game', 'living go', 'no real improvement unless you ...'; and so on. This is an artistic rather than a technical theory of go. Or the master chef bawling out the kitchen underlings for lack of committed perception.

Review of go books - Review of The Direction of Play
crux's review.

Charles Matthews: Plenty of interesting ideas here. I don't know where one does pick up the concept that good go depends on feeling. Some people might find it in these pages.

Halfling: At what strength should one read this book? It is a little confusing for me and I often don't understand when the author makes remarks like "It's clear that ..." : (

JohnAspinall : Man, this is the go book I love to hate. My reaction is that of Halfling's, only squared. The very first time that the concept of the direction of play is mentioned, out comes one of those "It's clear that ..."; and I want to scream "No! Dammit, it is not clear! I wouldn't be reading Chapter 1 of your book if it was clear. Have you no respect for your readers at all?" Now intellectually I know that I am applying a left-brain analytic approach to what is a very right-brain "feeling" presentation; not to mention the cultural nuances lost in translation, but if there is a single go book that drives me up the wall, this is it.

Malweth: I like to think of this book as: read this book, but ignore it. It may be useful at the strong SDK level if only read with the subconscious.

Chapter 1 The Direction of play

Chapter 2 The early stages are decisive

Chapter 5 The direction of play and joseki

Chapter 6 Once upon a game

Chapter 8 The direction of play for fighting 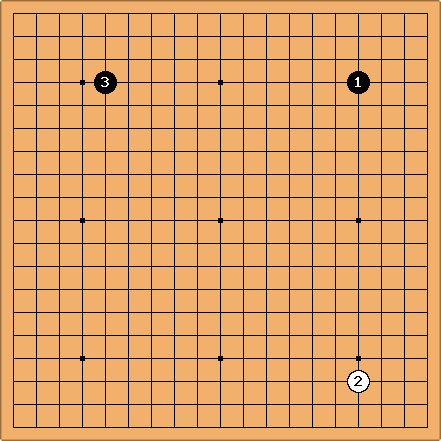 Willemien: in Chapter 3 (Move Two Lost The Game) Takeo Kajiwara mentions a nameless professional go player who, when he was carefully scrutinising one of his games, said: "Move two lost me the game". Kajiwara gives as perfect [sic] follow up after

are played, but in none of them I could find a game in which move 3 is at

Does anybody know of a game between professional players where after

Bob McGuigan: Kajiwara is well-known for his exaggeration and sarcasm. He does say that he "can't actually vouch for its veracity", referring to the story of the pro who said move 2 was the losing move. Bob McGuigan: The fact that out of some 50000 pro games only 162 have the

is not a very good response to

is hardly ever played in response to

at takamoku. This book is about direction of play and one aspect of that is making your stones work together. It is also good to be the first to play in an empty corner. 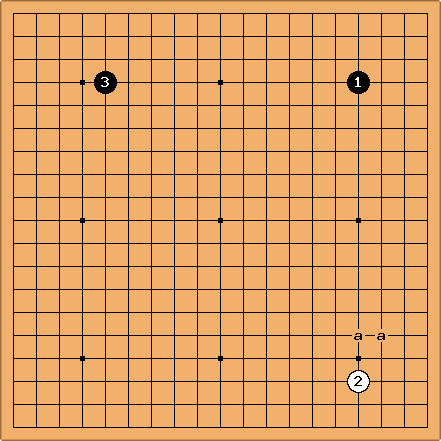 on the star point means that after

in the lower right a Black move at either of the points marked a is especially good, since the approach move works well with the star point stone in the upper right. After

the approach moves become even better for Black since all three black stones are working well together. So White might want to play at one of the a points himself with

. But that would then allow Black to play first in the lower left corner, getting the first move in three corners. If White plays

in the lower left then Black gets to make a great approach move to the lower right white stone. So White is faced with no good place to play after

This is an incomplete analysis of the situation, and of course, Kajiwara is thinking at a high level, so making use of the advantages or disadvantages might be difficult for us weak amateurs. But having this kind of thinking in mind will put us on the right track to getting stronger.

Bill: Didn't we have a discussion about this a couple of years ago? While calling

the losing move seems a bit doctrinaire, it does seem not to be so good. In fact, any 3-4 move in an empty corner on move 2 doesn't seem to work out so well, because Black can play 4-4 in the adjacent corner. :)

Bob McGuigan: I thought there was such a discussion, too, and I wanted to refer to it but I couldn't find it right away. As for any 3-4 move for

being less than optimal, White could force Black to play a diagonal fuseki by playing the other 3-4 in the lower right - that is, if Black insists on using the "good" approach from a corner star point. I haven't thought how that would work out but, psychologically at least, some people don't like to play diagonal openings, so that might inhibit Black.

Bob: There is some discussion of this situation at BQM 430